Share All sharing options for: Black people are 5 times as likely as white people to be injured by police

Black Americans are five times as likely to be sent to the emergency room with police-caused injuries as their white counterparts, according to Centers for Disease Control and Prevention data compiled by the Sunlight Foundation. The rate of injuries also appears to be rising for black people, while it's barely budged among white Americans since 2001. 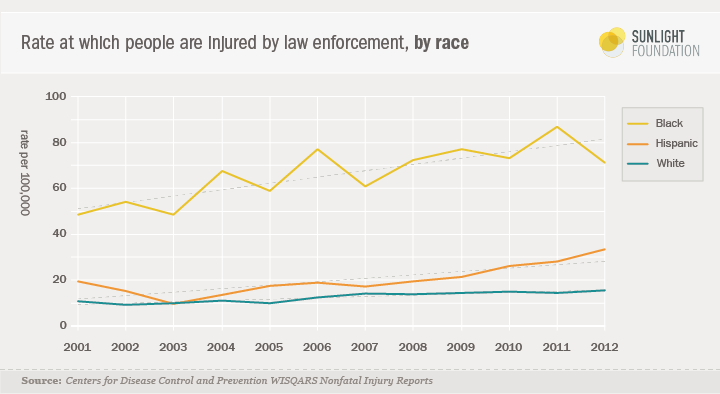 The data provides yet another example of the racial disparities in the criminal justice system. The disparities have been getting much more attention following the shooting of Michael Brown in Ferguson, Missouri, but, as the chart shows, they've been a nationwide problem for years.

Some federal officials are now giving the disparities more attention. The Department of Justice, for instance, has taken on more than double the civil rights investigations of police departments in the past five years than the previous five.

To learn more about racial disparities in the criminal justice system, watch the video below: