The Economist, in a September 4 review of new book The Half Has Never Been Told: Slavery and the Making of American Capitalism, chose an incredibly baffling angle for its critique of historian Edward Baptist's work (emphasis ours):

"Another unexamined factor may also have contributed to rises in productivity. Slaves were valuable property, and much harder and, thanks to the decline in supply from Africa, costlier to replace than, say, the Irish peasants that the iron-masters imported into south Wales in the 19th century. Slave owners surely had a vested interest in keeping their 'hands' ever fitter and stronger to pick more cotton. Some of the rise in productivity could have come from better treatment. Unlike Mr Thomas, Mr Baptist has not written an objective history of slavery. Almost all the blacks in his book are victims, almost all the whites villains. This is not history; it is advocacy."

The article was illustrated with a photo from the film 12 Years a Slave, accompanied by an offensive caption: 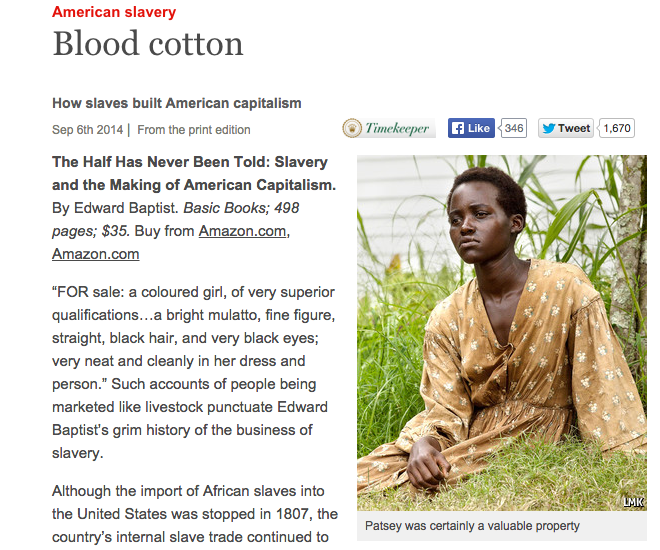 The review, unsurprisingly, sparked a massive backlash on social media.

The Economist reviews my book, but thinks I'm unfair to slaveowners: http://t.co/fa081Du9ss

Mind-boggling criticism of a book about slavery in the US South. pic.twitter.com/hjkjq2m7u6

A book review that accuses author @Ed_Baptist of bias against American slave owners. Ummmm. Me too. GUILTY. http://t.co/M5aOUJB3s8

Update: The Economist apologized for the article. The publication wrote, "There has been widespread criticism of this, and rightly so. Slavery was an evil system, in which the great majority of victims were blacks, and the great majority of whites involved in slavery were willing participants and beneficiaries of that evil. We regret having published this and apologise for having done so."