Share All sharing options for: Miami has 5 times more uninsured people than Boston

Miami had the highest uninsured rate of any large American city in 2013, new data from the Census Bureau shows. It beats out Houston and Dallas for the top spot: 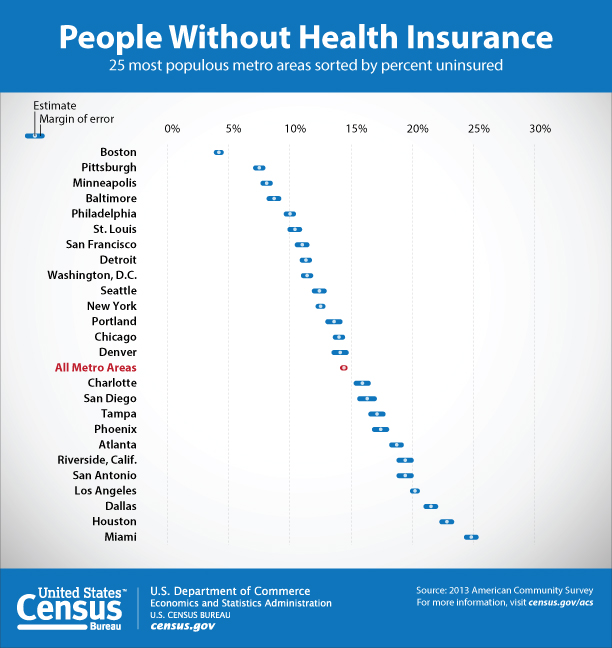 Boston, unsurprisingly, has the lowest uninsured rate after seven years of Romneycare.

This Census data comes from 2013, before Obamacare's coverage expansion kicked in for most states.* So it's likely that many of the bars in the chart above will shift left in 2015, when the Census releases data about this year's uninsured rate.

The shift might not, however, be especially huge in the cities with the highest uninsured rates in Texas and Florida. Part of this has to do with both states not participating in the Medicaid expansion, which leaves an estimated 1.8 million in Texas and Florida without access to affordable coverage. California has expanded Medicaid, and seen major drops in its uninsured rate.

But part of it has nothing to do with state decision-making. The cities at the bottom of the chart tend to have larger populations of undocumented workers. The Urban Institute estimated a decade ago, for example, that Miami had an undocumented population of 210,000.  Undocumented workers are ineligible for Medicaid, nor can they purchase coverage on the exchange even without out any federal subsidy. That means their uninsured rate is expected to stay very high, even after Obamacare is fully implemented.

*A handful of states expanded Medicaid early, before 2014. This includes Washington and Minnesota, both of which have below-average uninsured rates — and where lots of people would have been using Obamacare's Medicaid expansion in 2013.