Share All sharing options for: Teens are using less pot, alcohol, and cigarettes

Even as illicit drug use continues to creep up among all Americans, teenagers report less drug use.

The federal government's National Survey on Drug Use and Health, released Tuesday, found all types of drug use among Americans ages 12 to 17 declined in 2013 from 2009 and 2011 levels. While marijuana use has fluctuated up and down over the past decade, other drug use, particularly alcohol and tobacco, has steadily declined among teens in the same time period. 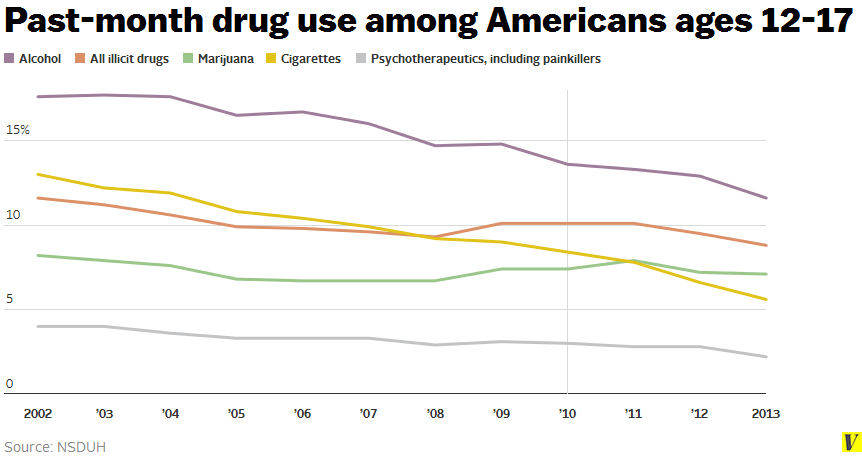 Perhaps the biggest public health win come through the dramatic, decades-long drop in teen use of alcohol and tobacco, the two deadliest drugs in America. Public health experts widely attribute the declines to stricter regulations and taxes on both substances and improved education campaigns that warned teens of the devastating effects of drug abuse.

The fall in adolescent marijuana use occurred even as fewer teens reportedly perceived the drug as dangerous: 39.5 percent said in 2013 that once- or twice-a-week pot use poses a great risk, down from 51.5 percent in 2002.

Opponents of marijuana legalization have warned that society's increased support for legalization would lead to a spike in teen pot use. Two states — Colorado and Washington — voted to legalize marijuana for personal use and sales in 2012, but neither began selling recreational pot in retail outlets until 2014.