More than one-third of Americans blame alcohol for family problems

Share All sharing options for: More than one-third of Americans blame alcohol for family problems

Americans are much more likely to blame alcohol for family problems than they were 30 years ago, according to a recent poll from Gallup. 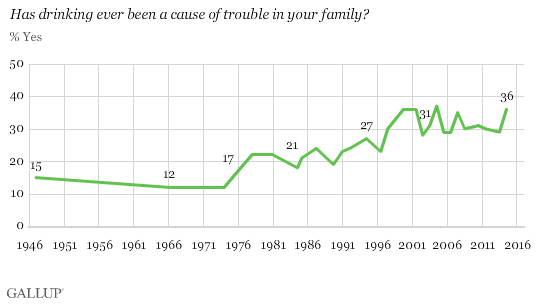 This increase comes despite a slight downturn in the number of reported heavy drinkers. The percentage of drinkers who reported having eight or more alcoholic drinks in the past week declined from an average of 17 percent during the 1980s to 13 percent in the current decade, Gallup found.

As Gallup points out, some of the reports of more family problems could be due to greater awareness. Since people better understand alcoholism now than they did three decades ago, they might be more willing to discuss and stigmatize excessive alcohol consumption within their families.

Still, the findings also reflect America's alcohol problem. Data from the Centers for Disease Control and Prevention shows alcohol was the second deadliest drug in the nation in 2010, after tobacco. Another CDC study from June found excessive drinking causes nearly one in 10 deaths among adults ages 20 to 64.

These kinds of stats are why more drug policy experts have called for more stringent alcohol taxes. In a big review of the evidence, researchers Alexander Wageneaar, Amy Tobler, and Kelli Komro concluded that increasing the alcohol tax would significantly reduce violence, crime, and other negative repercussions of alcohol use.