Student debt correlated with nagging sense that life is pointless

Share All sharing options for: Student debt correlated with nagging sense that life is pointless

Student debtors are hurting in ways that go way beyond their finances. A new Gallup poll shows student debtors' self-reported financial well-being, sense of purpose, and even physical health are worse than people who have no debt.

The results are part of a new Gallup-Purdue Index, which will study how going to college affects people's lives. Gallup asked adult college graduates about their well-being on various metrics — the percentages are the numbers of people who say they are "thriving" in any given area.

It makes intuitive sense that indebted people report they are worse off financially than those who are not.

But Gallup also found that more heavily indebted people are less likely to be "thriving" physically than their less-indebted peers. 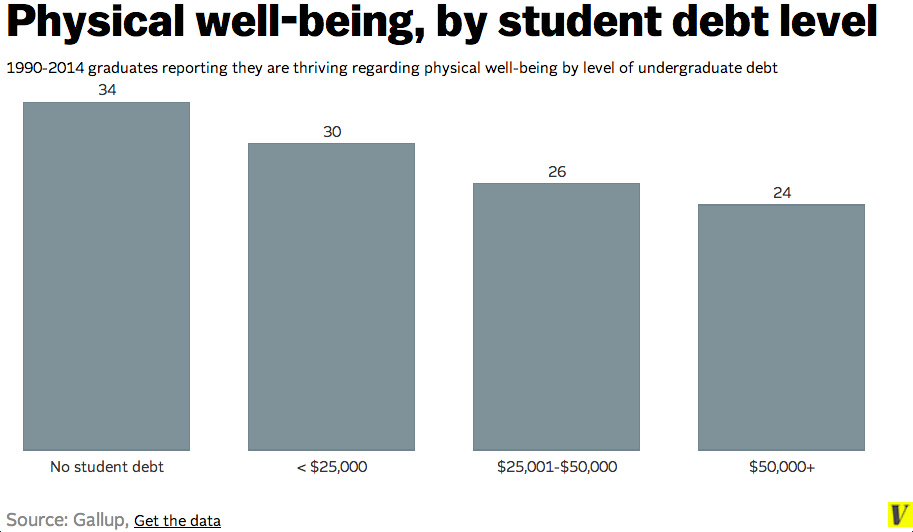 And that trend is also evident in the area of life purpose.

Gallup also found a less-pronounced difference in whether people are thriving in terms of their sense of community. But everyone appears to be doing OK socially — though less-indebted people were doing slightly better in that area, the results weren't statistically significant.

It's not necessarily that student debt is causing worse well-being, however. The factors that cause a person to need student loans — a low family income before college, for example — could also contribute to worse emotional or physical well-being, as Gallup points out.