Congress hits a new low — for the first time, most people don't like their own representative

Share All sharing options for: Congress hits a new low — for the first time, most people don't like their own representative

Congress's approval has often been quite bad in recent decades — and in the past year and a half, it has sunk to historic lows. Yet consistently, polls have shown that while people dislike Congress in general, they tend to like their own representative, and think he or she is doing a good job — which helps explain why so many incumbents get reelected every year. According to a new Washington Post-ABC News poll, though, that's not the case anymore — for the first time in the poll's history, a majority of people disapprove of their own representative's performance: 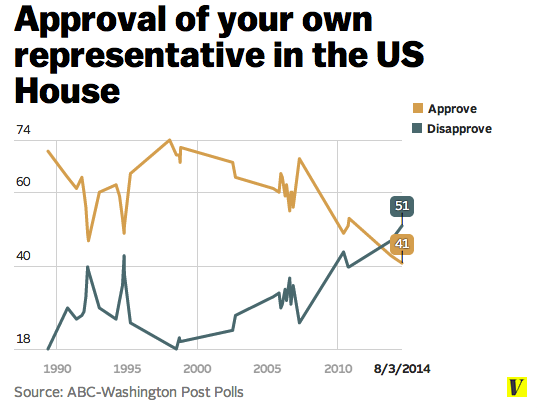 Don't expect a big change anytime soon, though — it currently appears that the GOP is likely to hold onto the House for several more years.