Share All sharing options for: New study finds a five-fold increase in superbugs we can't treat

This is a very scary chart: the solid line in the middle shows the incredibly fast rise of antibiotic superbugs, the type of infections that are resistant to our current arsenal of medical treatments. 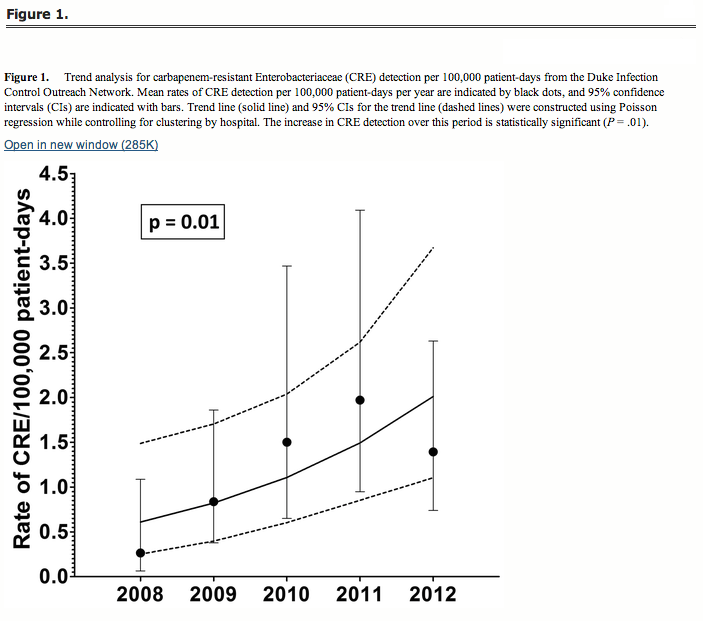 The rate of infections with one particularly scary superbug — carbapenem-resistant Enterobacteriaceae, or CRE — has grown five-fold since 2008, according to a new study of 25 Southwestern hospitals that are part of an infectious disease network run by Duke University.

There are a few possible explanations for this trend, researchers writing in the journal Infection Control and Hospital Epidemiology say. One is that this particular infection appears to be on the rise; that's something that the Centers for Disease Control and Prevention has warned about since at least 2012.

One other theory, which is just barely more comforting, is that we've simply developed better technology for detecting CRE. Labs now use "more sensitive detection methods," and that could mean some cases that slipped by them earlier are now turning up in later statistics.

At the same time, the authors think their work still underestimates the rate of CRE infections, largely because not all hospitals have adopted the best detection methods. There are probably even more cases out there that hospitals never even detected, and that could be a huge problem all unto itself.

"The inability to detect and control CRE," the study authors write, "makes in-hospital transmission more likely and could further drive the increasing trend and lead to hospital outbreaks."

(Hat tip to WBUR's Here and Now, where I noticed the study)