Democrats are attacking Mitch McConnell for not liking coal enough

Share All sharing options for: Democrats are attacking Mitch McConnell for not liking coal enough

The Kentucky Senate race has taken a weird turn, as 8 Kentucky Democrats have sent a letter calling on Mitch McConnell's wife, former Labor Secretary Elaine Chao, to resign from the board of an "anti-Kentucky coal organization," reports Chris Moody of Yahoo! News.

The letter cites an earlier report by Moody, which pointed out that Chao sits on the board of Bloomberg Philanthropies — which is giving $50 million to the Sierra Club's "Beyond Coal" initiative. "Beyond Coal" calls for retiring old coal plants, blocking proposed new ones, and "keeping coal in the ground in places like Appalachia."

Though Bloomberg Philanthropies actually committed the money before Chao joined its board, and though McConnell has long opposed environmental regulations and any effort to address climate change, these Democrats are now calling on the couple to "return the money they have pocketed" from coal-haters.

The context is that McConnell and his Democratic challenger, Alison Lundergan Grimes, have been trying to out-coal each other for months. McConnell's consistent message has been to tie Grimes to the alleged "war on coal" that President Obama and Harry Reid are conducting. An early ad from McConnell featured a t-shirt showing Reid, Obama, and a smiling Grimes, and emblazoned with a 2008 quote from Reid criticizing coal. 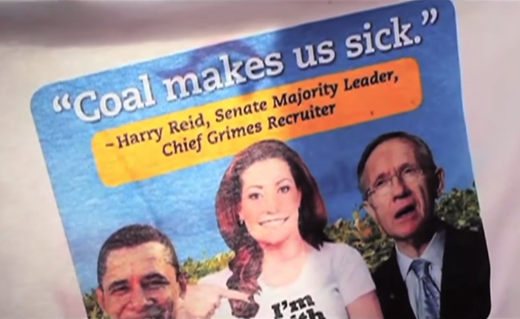 Meanwhile, when President Obama announced his new EPA regulations on power plants in June, Grimes aired a radio criticizing President Obama by name, saying, "Your EPA is targeting Kentucky coal with pie-in-the-sky regulations that are impossible to achieve." The ad closed by saying, "I'm running for Senate to protect our coal jobs."

Though Grimes led in the occasional poll earlier this year, more recent polls have shown her falling behind McConnell. And unfortunately for Grimes, it's inescapably true that the Democratic Party is far more willing to support tougher regulations on coal — and that, regardless of how she eventually votes on the issue, her win would help keep that party in power. Democrats' new attack on McConnell is an amusing "gotcha," but really is just an attempt to distract Kentucky voters from this obvious fact.