Poll: Democrat only 4 points behind in Kansas Senate race

Share All sharing options for: Poll: Democrat only 4 points behind in Kansas Senate race

Most forecasters are currently predicting that control of the Senate will come down to about 9 competitive races — and that Kansas's race won't be one of them. And when 78-year old Senator Pat Roberts (R-KS) won his primary last week, it was believed that he put the seat out of Democrats' reach.

Yet a poll by Rasmussen, released Monday, puts Roberts ahead his little-known Democratic challenger Chad Taylor by a mere 4 points, 44 to 40. 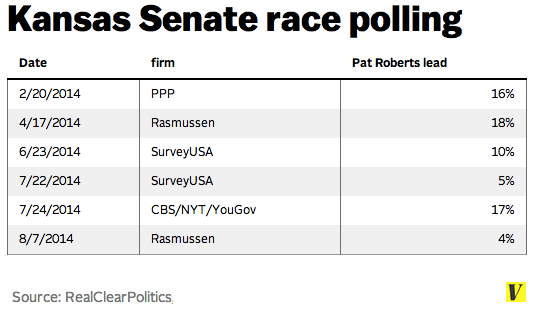 One poll alone doesn't mean much, but this is actually the second of the three most recent polls to show Roberts with only a small lead, as a Survey USA/KSN poll from July put him up just 5. Additionally, the new Rasmussen poll didn't ask about independent candidate Greg Orman, but Survey USA/KSN found him winning 14 percent of the vote, and drawing more Republican votes than Democratic ones.

However, the other recent poll of the Senate race, based on an online panel and conducted by The New York Times, CBS, and YouGov, showed a comfortable 17 point lead for Roberts, and earlier polls have also showed Roberts with a double-digit lead.

These new results come as the state's governor, Sam Brownback, has trailed Democratic challenger Paul Davis in some recent polls (this new Rasmussen poll shows Davis up by 10 points, his largest lead in any so far). Brownback's large tax cuts have caused controversy in Kansas, and led to several downgrades of the state's bond ratings. In July, about 100 former Republican officeholders endorsed Brownback's Democratic challenger. It's possible that the anti-Brownback sentiment in the state could be hurting Roberts too. The fact that he no longer owns a home in Kansas also might not help.

Taylor, a county district attorney in Kansas, faces some formidable disadvantages in his attempt to unseat Roberts. Particularly, he had only raised $130,000 by the time of the last fundraising report, and spent nearly all of it during his primary. And his challenge for Roberts to participate in 105 debates, one in each Kansas county, comes off as a stunt. But as liberal groups are already expected to invest heavily in the Kansas governor's race, it looks like it might be worth keeping an eye on the Senate race as well.