The older people are, the older they think they'll be when they retire

Share All sharing options for: The older people are, the older they think they'll be when they retire

A new Fed survey shows that young people are way more likely to have a traditional view of retirement — work hard, then quit and have a few years of leisure. But the older people get, the more they start having different ideas.

Below are two of the areas where people's responses vary the most by age: plans to stop full-time work altogether and retire, and plans to work as long as possible. 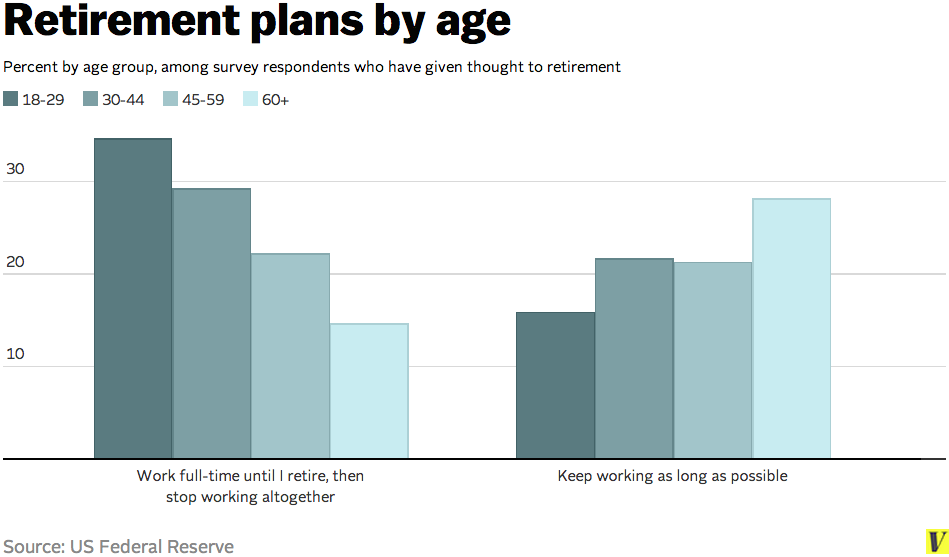 "From this survey alone, it is not possible to know whether these difference reflect a change in desired outcome over time (with older adults perhaps realizing that they want to stay in the workforce longer than younger adults believe they will), an increased understanding of the financial challenges of full retirement, or simply intergenerational differences in attitude about retirement," says the report.

Of course, these were not the only two options. Below is a rundown of how the different age groups felt about all the responses.

One caveat: this only counts people who "have given at least some thought to retirement." Nearly 41 percent of 18-to-29-year-olds say they've given it no thought at all, compared to 19.7 percent of people 60 and over…which is itself startling.