Scientists just rediscovered a long-lost region of the brain

Share All sharing options for: Scientists just rediscovered a long-lost region of the brain

Researchers just rediscovered an area of the brain that had been forgotten for basically a century.

What region? The vertical occipital fasciculus, aka VOF, which is likely important for visual perception of things like faces and words. It's marked with the dotted blue lines below: 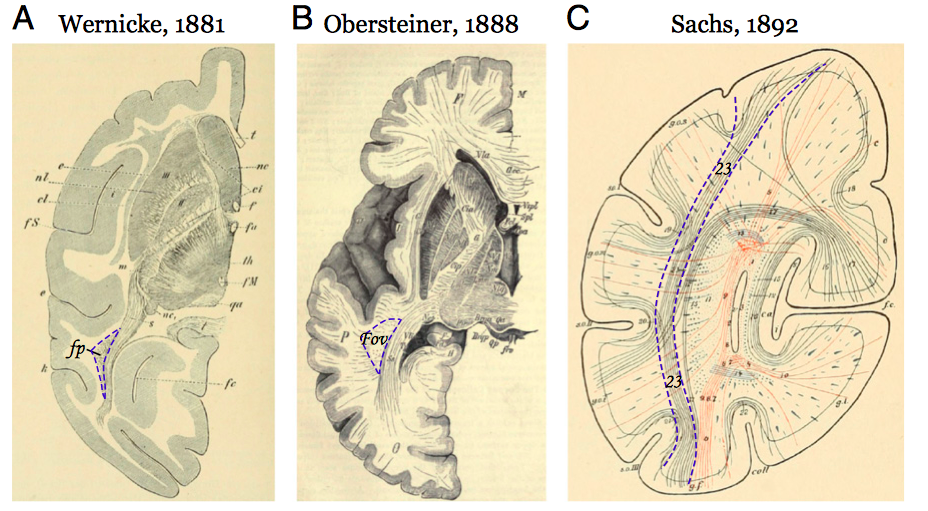 The VOF was originally discovered in the late 1800s century but then pretty much disappeared from the scientific literature for more than a century as scientists stopped recognizing it as a distinct area. Marissa Fessenden recently rounded up media coverage of the VOF's odd history over at Smithsonian.

In 2013, a research team at Stanford and University of Washington brought the VOF back to life when they described it in a paper. And on November 17, 2014, they confirmed the VOF's existence with sophisticated brain imaging in 37 living people in a paper in PNAS.

Their newer article also puts forth several possible reasons why the VOF region got lost in the first place:

1) The VOF didn't conform to what people expected the brain to look like at the time. Carl Wernicke discovered the VOF while dissecting a monkey in 1881. (If Wernicke's name sounds familiar, it's because he has a brain area named after him: Wernicke's area, which is critical for speech.) The VOF is a bundle of neurons connecting two other areas together, but it was oddly oriented. Wernicke’s mentor, Theodor Meynert, believed that such big connections only ran from the front to the back of the brain. The VOF ran from the bottom to the top. This may have made Meynert more inclined to reject the idea that this was a real, distinct area of the brain. Meynert never mentioned the area once in any of his work.

2) Bad branding. In the 1800s, people were calling the VOF all kind of different names. There was no standardization of the nomenclature. "We suspect that this haphazard naming convention contributed to the disappearance of the VOF from the literature," the authors of the PNAS paper write.

3) It was difficult to find. Brain anatomy isn't always easy. When dissecting a brain, it can be difficult to see what's what. Even into the early 1900s, people were arguing about whether the VOF actually existed or not. And the VOF-deniers won. Because it just kind of dropped off the face of the Earth (with the exception of being mentioned in two medical cases in the 1970s).