A ridiculously detailed breakdown of Obama's 2016 budget proposal, all in one chart

Share All sharing options for: A ridiculously detailed breakdown of Obama's 2016 budget proposal, all in one chart

How can you visually compare what the Air Force spends researching the "space fence" and other far-flung projects with the budget of the Food and Drug Administration, which tries to keep the E. coli out of our cabbage? If the first is represented by the area of a circle the size of a quarter, the second would be the size of a pencil eraser.

Those are the kinds of comparisons we facilitate with the budgetary diagram called Death and Taxes, which we sell as a poster on our site, timeplots.com. We are releasing the 2016 poster today. 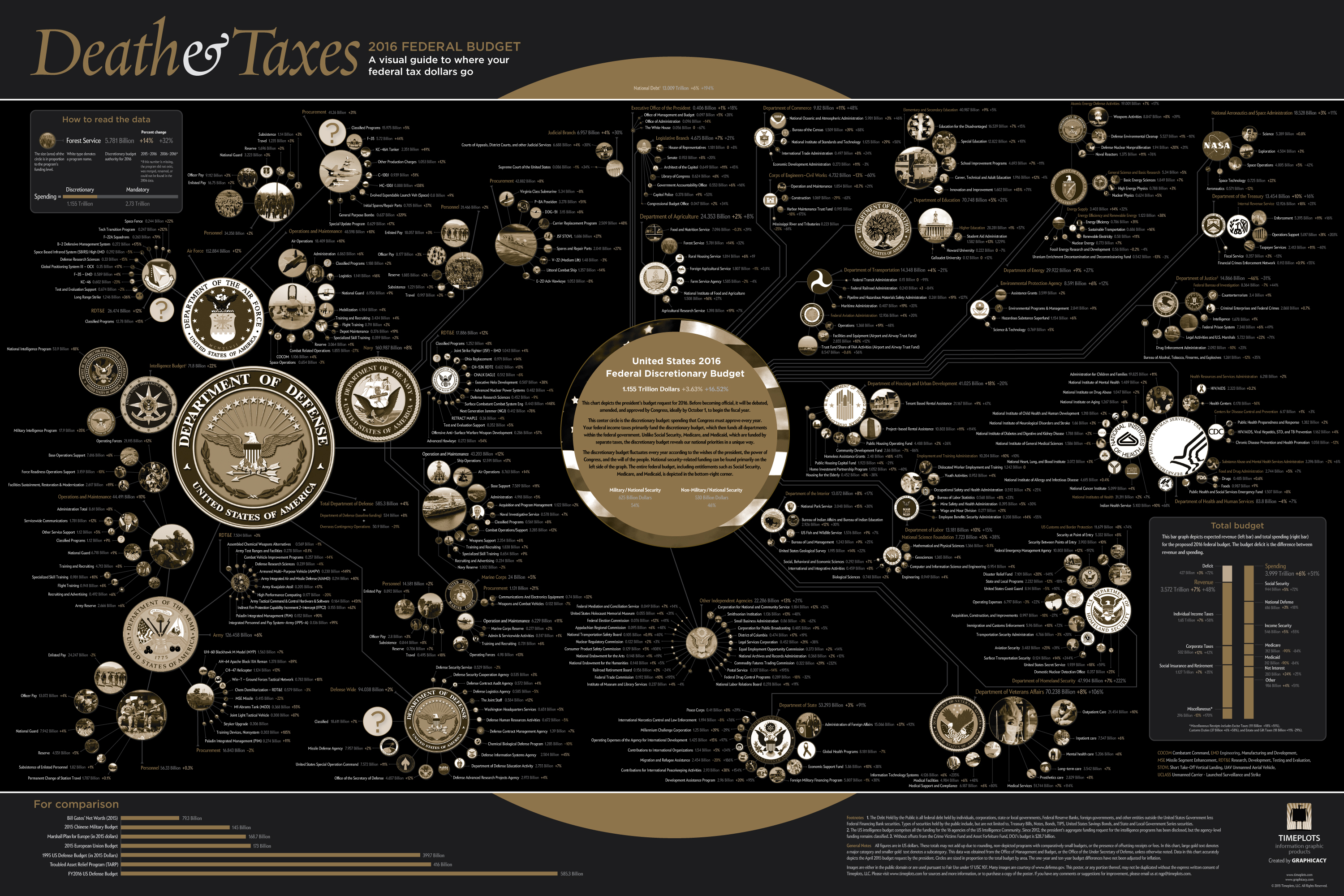 Mouse over to zoom, or see a larger version here. (Timeplots.com)

Since 2004, Death and Taxes has presented the president's proposed budget in a way that's easy to understand and beautiful on a wall (at least according to fellow budget wonks and other interested citizens.) The budget is a proposal from the president — a reflection of his vision and priorities, but not necessarily what Congress approves.

We achieved this conversion of figures to art by using software to crunch budget numbers and output a series of rings representing departments, bureaus, and programs, which we then incorporate into an information graphic design. Each major federal government expense is represented with these proportionally sized circles so that people can understand how big (or small) each line item is. The poster contains over 500 departments, agencies, and programs.

Each item has its own story, and viewers can draw their own conclusions, based on the area they wish to investigate or focus on. For example, the budget of the Bureau of Alcohol, Tobacco, Firearms, and Explosives is nearly four times as large the Peace Corps'. The Federal Prison System gets about the same amount of funding as the National Science Foundation. Depending on your point of view, the story takes on different shape. The data shows how trivial in the context of the whole budget are some of the biggest political tangles.

Nathaniel Pearlman is a former computer programmer who founded the political software company NGP VAN and was Hillary Clinton’s CTO in the 2008 race. He has a retro affinity for wall-size paper products.

No, the gun control debate was not “over” after Sandy Hook

A child can’t be a “good guy with a gun”