The health-care law's requirement that all insurers cover contraceptives has faced challenges in court and in implementation as the Obama administration attempts to make birth control free for nearly all American women.

Insurers must cover birth control at no cost to patients

Obamacare requires health insurance plans to cover all FDA-approved contraceptives without any cost-sharing for the patient. (The Supreme Court did scale back this requirement for a small minority of companies, which you can read more about here).

While birth control is often used as shorthand for hormonal birth control pills, in the case of the health-care law, it refers to 18 types of contraceptives that the FDA has found to be safe and effective. This includes but is not limited to oral contraception (a.k.a. the Pill), birth control patches, the ring (otherwise known as Nuvaring), the shot (Depo-Provera), IUDs (short for intrauterine devices), and permanent contraceptive methods.

The birth control mandate means that complying insurers cannot charge co-payments when patients fill any birth control prescription, whether that's for birth control pills or an IUD (which can cost as much as $1,000).

The birth control mandate is one of eight women's preventive health benefits that the health-care law requires health plans to provide without cost-sharing. Other required benefits include breastfeeding equipment, HPV testing, and domestic violence screenings.

Under Obamacare, two-thirds of women are getting no-cost birth control pills

The study, published in the journal Contraception, shows the percentage of privately insured women who paid nothing for the pill rose from 15 percent in the fall of 2012 to 67 percent this spring.

Women using less popular forms of contraception, like injectables or the ring, saw similar increases over the same time period.

Americans are slightly less supportive of mandated birth control coverage than other preventive services, like teeth cleanings and vaccinations. Parents and women tend to be most supportive of the requirement.

A survey of more than 2,000 Americans published in the Journal of the American Medical Association found about two-thirds of Americans support the regulation — which is lower than support for other preventive health care. 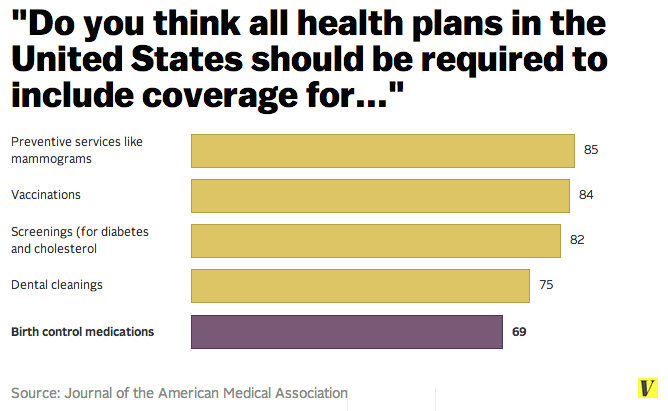 While separate polling has found more education to be associated with higher levels of support for the Affordable Care Act overall, this survey shows that college-educated Americans are slightly less supportive of mandated birth control coverage. 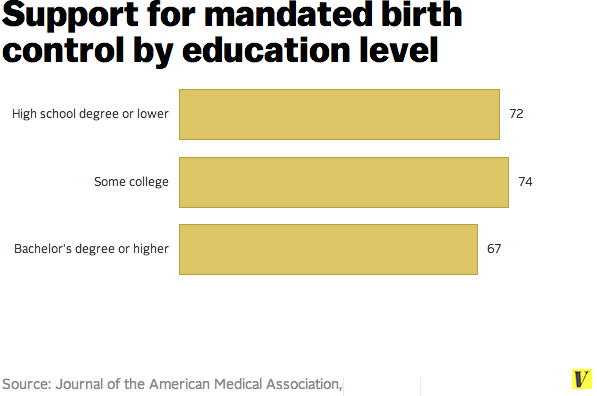 Higher-earning Americans also tended to be less supportive of the birth control mandate. Among those earning more than $100,000, 68 percent said they supported the mandate compared with 72 percent of those earning $30,000 or less.

The starkest divides are between men and women, and parents and non-parents

Women's support for mandated coverage of birth control is 13 percentage points higher than men's, the largest divide in the survey.

The other place where there was a double-digit gap was among people who already have kids. Parents with children under 18 are much more supportive of the mandate than those without kids (or with older children).

The Supreme Court ruled against the birth control mandate in 2014

On June 30, the Supreme Court ruled that Obamacare's birth control mandate violated religious freedoms — and that certain companies would not have to comply with the requirement.

The Supreme Court left the birth control mandate intact for most American businesses. It did, however, give some religiously affiliated companies the latitude to not cover contraceptives. Specifically, companies that can opt out of the mandate must fall into one of three categories: 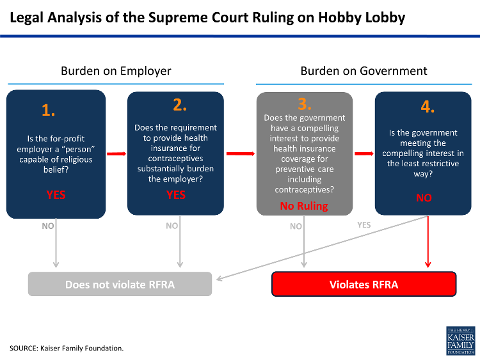 In a case that eventually made it way to the Supreme Court, Hobby Lobby and Conestoga argued that the birth control mandate violates the Religious Freedom Restoration Act, or RFRA, which was signed into law by President Clinton in 1993. The Supreme Court answered three key questions in its ruling.

In the spring of 2015, two investigations — one by the Kaiser Family Foundation and another by the National Women's Law Center — found that some insurance plans continue to charge birth control co-payments, despite the mandate.

Some insurers seemed to blatantly disregard the Obamacare mandate. The KFF study — which looked at a sample of 20 insurers in five states — found one that simply didn't cover the birth control ring and four that "couldn't ascertain" whether they covered birth control implants. These are potential violations of the law.

What was more common, however, was insurers using something called "reasonable medical management." This is where insurers restrict access to certain medications when they think there might be a cheaper, equally effective way for patients to get the same treatment. There was evidence, for example, that insurers would cite reasonable medical management to refuse to cover the birth control ring — telling patients they could use pills instead.

At first, there was a bit of confusion about whether this was legal under the health-care law. New guidance released May 11 clarified the Obama administration's view. It said that this type of reasonable medical management was illegal, and that the mandate in Obamacare ought to be interpreted as requiring insurers to cover every type of birth control.

What to do if your birth control isn't free

The National Women's Law Center offers guidance on how to make sure women get the best access to contraceptives, as well as a hotline for women to call if they feel their insurer is violating the birth control mandate. More information is available here.

NFTs and the monetization of hope