Share All sharing options for: A bracket to determine the most influential American who never became president

This post is part of Mischiefs of Faction, an independent political science blog featuring reflections on the party system.

Who was more influential in American history, Earl Warren or Colin Powell? Did Barry Goldwater or George McGovern have a greater legacy on the American party system? Who left a bigger imprint on modern domestic policy, Newt Gingrich or Sandra Day O'Connor?

If these are the sorts of questions that keep you up at night, I have good news for you. Political scientist Michael Miller (with some help from historian Ken Owen) has developed a bracket tournament pitting 64 leading non-presidents against one another. The tournament is being played out on Twitter at the hashtag #bestnonpres, and the first round of voting has already started. Anyone can participate. The contest culminates with a final matchup on December 2. 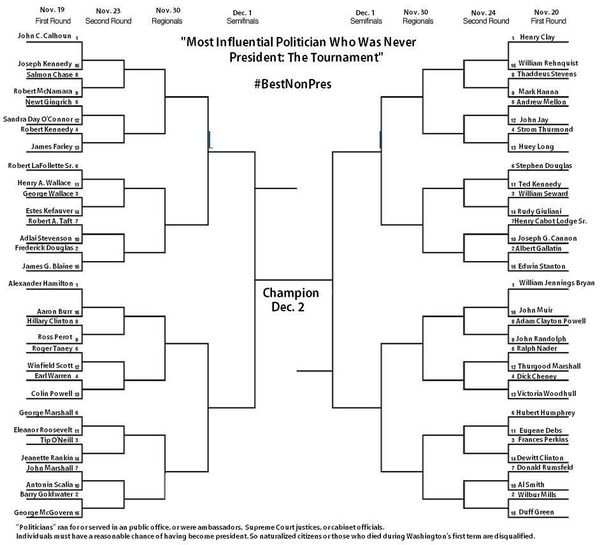 Who actually got to be among the 64 candidates? The rule Miller and Owen came up with was that it had to be a politician (someone who ran for public office, served in a presidential Cabinet, or was on the Supreme Court) who was eligible for the presidency and could have plausibly attained it under the right circumstances. They excluded people who died during George Washington's presidency, as that really wasn't much of an open contest.

How do you actually decide who's the more influential non-president? That's kind of hard to say, and Miller has left it up to participants to figure out what it means. I thought it a bit rude to put Alexander Hamilton up against the man who killed him, Aaron Burr, but it seems pretty clear to me that Hamilton has had a far greater influence in American history, particularly on the nation's monetary system.

But what about George Marshall (former secretary of state, secretary of defense, and recipient of the Nobel Peace Prize for his innovative plan to aid European nations after World War II) versus Eleanor Roosevelt (first lady, human rights activist, delegate to the UN, chair of the UN Commission on Human Rights, and chair of JFK's Presidential Commission on the Status of Women)? That's a tough call.

It's also hard to decide between people like Roger Taney and Winfield Scott. Taney, the chief justice who authored the infamous Dred Scott decision in 1857, probably did more than almost any other single person to bring about the Civil War. That's certainly influential but also somewhat execrable.

Anyway, you get to decide just what influential means to you. Be sure to participate — the first round will end soon.

Next Up In Mischiefs of Faction