Arkansas and Michigan prove Republicans can compromise on Medicaid

Share All sharing options for: Arkansas and Michigan prove Republicans can compromise on Medicaid

But a few states have mustered bipartisan support to move forward on Medicaid — mostly by petitioning the Obama administration for really big changes to how the public program works.

"These alternatives are allowing states to break through political barriers that they have faced to expand their Medicaid program," Sara Collins, vice president of the Commonwealth Fund, said at a Monday briefing on these expansion models.

This wasn't how the Medicaid expansion was supposed to work: the health care law initially required all states to expand the program to everyone below 138 percent of the federal poverty line (about $15,000 for an individual). But the Supreme Court ruled that part of the law was unconstitutional, and allowed each state to decide whether to opt into the expansion.

That means some five million Americans still lack access to affordable coverage because their states are refusing expansion — access that new research suggests could save lives. 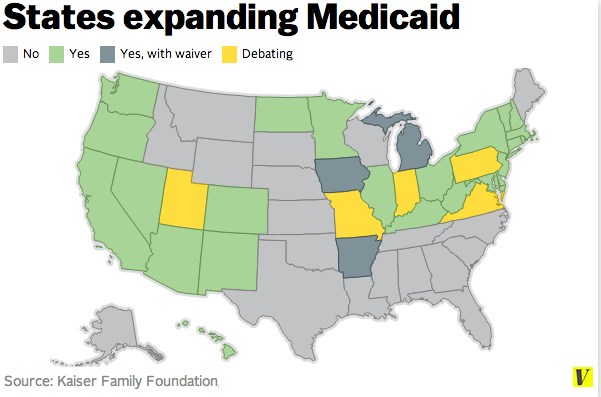 Federal waivers — which allow states to significantly reshape what the Medicaid expansion looks like — are seen as a promising strategy for working with state legislators that oppose Obamacare.

"Stakeholders indicate it will be easier to convince resistant legislators to consider reforming rather than simply expanding Medicaid," writes David K. Jones and coauthors in a recent JAMA editorial. Which means that Medicaid waivers — the federal government's main tool to reform the program — might be key to getting more Republican states on board.

Arkansas thinks it can improve access and quality by putting Medicaid enrollees in private insurance.

Arkansas thinks that their private option will offer equal or better access and health outcomes relative to traditional Medicaid, and better continuity of care because enrollees won’t "churn" between Medicaid and private insurance if their incomes are volatile and near the Medicaid eligibility threshold.

Arkansas is trying something completely new with Medicaid — and its hard to know right now whether it can deliver on the improved outcomes state officials hope to achieve.

"The question of whether bringing everyone into the same network will improve access and utilization is a great question to ask, but we actually don’t know the answer," Alan Weil, executive director of the National Academy for State Health Policy, said at the same briefing. "We may think we know the answer, but we don’t."

Weil highlighted the fact that Medicaid providers have invested resources in meeting the needs of their patient population that commercial insurers have traditionally neglected, including an emphasis on culturally competent care, efforts to make care geographically accessible, and facilitating linkages to social services.

Michigan isn’t moving their Medicaid population into exchange plans like Arkansas. But it is taking cues from the private sector to encourage healthy behaviors.

The state's Republican governor, Rick Snyder, announced his support for the Medicaid expansion in early 2013, but he had to work with a reluctant conservative legislature to authorize expansion. Snyder signed the expansion into law last September, and the state received waiver approval from the federal government in late December.

The first step in Michigan's effort to encourage healthy behavior is having enrollees complete an annual health risk assessment, a survey used to identify health risks and potential areas for improvement, like smoking and obesity; this is patterned on a similar questionnaire administered by Blue Care Network of Michigan.

The state may use other incentives for healthy behavior in the future; those are still being finalized. Enrollees who complete the assessment and comply with healthy behavior standards will be rewarded with smaller co-pays.

The state also taps into an idea popular with conservatives to encourage prudent health spending: Michigan is creating health savings accounts that beneficiaries can draw on for co-pays. Enrollees between 100 and 138 percent of the federal poverty line will be expected to pay two percent of income into the account. The state will also make contributions.

Most beneficiaries will be expected to pay co-pays after six months of enrollment, though these co-pays will not exceed five percent of income. Certain services will be exempt from cost sharing, like preventive care, high-value drugs, and emergency medicine.

So far, both programs have proven extraordinarily popular. Will that bring other states on board?

Arkansas and Michigan have both seen robust enrollment through their expanded Medicaid programs. So far, Arkansas has enrolled over 150,000 individuals into the private option; the state estimated that private option enrollment would top out at 250,000.

Private option beneficiaries skew younger than the typical exchange population — which is good news for insurers. Having more young adults in the exchange may lower their premiums for next year, according to Arkansas's Surgeon General Joe Thompson.

Michigan's Medicaid expansion didn't go live until April 1, due to a quirk in how the legislation was passed. State officials anticipated about 350,000 new beneficiaries in the first year. By May 1 — one month after launch — Michigan had enrolled roughly 200,000 enrollees, more than half of the target for the year.

This early success should ease the way for other red and purple states to pursue alternative expansions — shrewd observers might even speculate that this is an unprecedented opportunity for conservatives to embed their principles in state Medicaid programs.