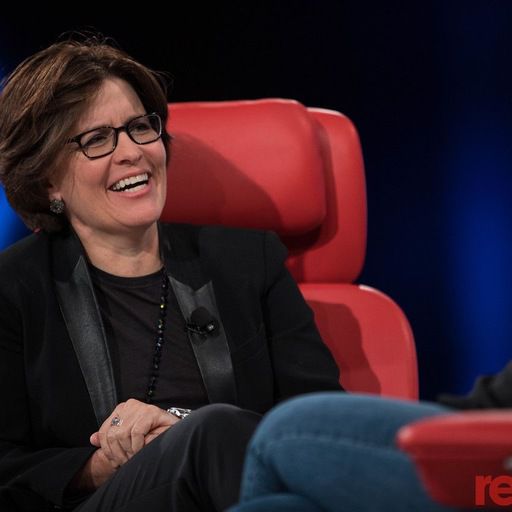 Kara Swisher is the co-founder and editor-at-large of Recode, producer and host of the Recode Decode and Pivot podcasts, and co-executive producer of the Code Conference series. She also has a special series on MSNBC called Revolution on the impact of technology on work, society, and more, and is a contributing opinion writer for the New York Times.

Swisher co-founded Recode and, before that, co-produced and co-hosted the Wall Street Journal’s "D: All Things Digital" conference series (now called the Code conference) with Walt Mossberg starting in 2003. It was, and still is, the country's premier conference on tech and media, with interviewees such as Bill Gates, Steve Jobs, Mark Zuckerberg, Jeff Bezos, the Google leadership, Tim Cook, Jack Dorsey, and many other leading players. She and Mossberg were also the co-executive editors of a tech and media website, AllThingsD.com, founded in 2007.

Swisher worked in the Wall Street Journal’s San Francisco bureau. For many years, she wrote the column "BoomTown," which appeared on the front page of the Marketplace section and online at WSJ.com. Previously, Swisher covered breaking news about the web’s major players and Internet policy issues and also wrote feature articles on technology for the paper.

Swisher is also the author of aol.com: How Steve Case Beat Bill Gates, Nailed the Netheads and Made Millions in the War for the Web, published by Times Business Books in July 1998. The sequel, There Must Be a Pony in Here Somewhere: The AOL Time Warner Debacle and the Quest for a Digital Future, was published in the fall of 2003 by Crown Business Books.

Let’s begin with a critical piece of information every reader of this site needs to know about me: Megan Smith, my longtime spouse from whom I am now divorced and have two children, has served as the Chief Technology Officer of the United States, working for the administration of President Barack Obama.

Previously, Megan had been an executive at search giant Google since 2003 until mid-2014, where she held a number of jobs, including as vice president of new business development and general manager of the company’s philanthropic arm, Google.org. Her last job was working at Google[x], the division of the company dedicated to "moon shot" experiments such as driverless cars, Project Glass (wearable computers) and Project Loon (Internet access delivered by high-altitude balloons). She never shared information with me about any of these projects nor any others she was involved in while at Google.

Obviously, a substantial amount of Megan’s income from Google has been in shares and options, all of which she sold as part of her government job. Megan made all her own decisions related to these shares and options, and I did not own any of them nor did I get any of the money from their sale. I also declined to take any of her assets in the divorce settlement and, in the event of her death, her wealth will pass directly to our two children. In fact, except for sharing joint expenses for our children, we have no financial ties at all.

While some may raise objections, I would hope that readers will judge my work on its merits, especially in light of my extensive experience covering the technology industry for the Wall Street Journal, the Washington Post and in two books about AOL I authored in the 1990s. In fact, I began reporting on Google itself in 1999, well before others did, and wrote many articles about the company years before Megan worked there.

Honoring a long-term commitment to high standards of journalism is key to the success of my work. I am well aware of the controversies surrounding ethics online now swirling about, some of which have resulted in giving readers some pause about the quality and honesty of some in the blogosphere. Such wariness is always a good thing for everyone and I encourage readers to ask tough questions and demand more of those providing them information of all kinds. I know that I am asking for a large measure of trust from readers of the site, and I pledge to do everything I can to be deserving of that trust.

Nonetheless, I urge you to make any comments you might have about my relationship with Megan on this site, especially if you think it is impacting my work adversely, as long as they remain civil and do not contain attacks related to my sexual orientation, which will simply not be tolerated and will be removed immediately.

As always, I intend to break news on this site and I will make subjective comments on the business and strategies of technology companies and issues, including sometimes about these investors and I will always have a direct link in such cases to this disclosure.

I don’t accept any money, or anything else of value, from the companies I cover, or from their public relations or advertising agencies. Except for minor items, I either use funds from our LLC or my own money when purchasing devices I use, such as computers, digital media players, digital cameras, as well as my Internet service, cellphone service and cable-TV service (no free Comcast for Kara!).

I also don’t serve as a consultant to any companies. I do occasional freelance articles, for which I am paid a fee. I make a number of speeches each year, mostly unpaid. If I do accept a fee, I never make speeches at events hosted by companies I cover.

I have investments in several group funds, which are managed without my input by an investment bank, and they might from time to time put my money into funds that buy shares of stock in the companies I write about. But I do not have any knowledge about when they buy and sell any shares. I also have several general stock-index mutual funds, but none is specifically technology-focused, although any one might, from time to time, acquire shares in some technology companies I write about. In this case, as with all my investments, I also have no knowledge of when they buy and sell any shares. I also own a substantive number of shares in a family LLC, but it has nothing to do with the tech industry.

I never coordinate my work with our advertising sales staff, and I don’t solicit or sell ads for the Recode site or sponsorships for the Code Conference. In addition, advertisers and companies I cover don’t get to see my posts in advance or select or reject topics. Similarly, sponsors of the conference don’t get to select or reject speakers on the agenda or select or preview the questions we ask speakers onstage. We don’t charge companies for appearing onstage at the conference to demo new products and we don’t pay speakers to come to it, either.

After a wild 8 years, Facebook’s former VP of communications is switching to venture capital investments

Apple’s VP of communications is leaving the company

The reckoning: a manifesto for Code 2019

Welcome to the new Vox-Recode partnership

Can anyone tame the next internet?