Big insurers have quit Obamacare. That means more shoppers only get one choice.

In 2016, there were 182 counties with only one Obamacare insurer.

In 2017, there will be 687 counties with only one Obamacare insurer.

Healthcare.gov is on track to offer shoppers fewer options than ever before in 2017.

Major insurers like Aetna and UnitedHealth have, in recent months, taken major steps to sharply reduce participation in Obamacare's insurance marketplaces. The result, a new Vox analysis shows, is a spike in counties served by just one health insurer — and a precipitous drop in ultra-competitive areas.

There are currently 687 counties on the Healthcare.gov marketplace with just one insurer signed up to sell in 2017 — nearly four times the 182 counties that had one insurer this year.

Competitive markets, meanwhile, seem to be disappearing. In 2016, 66.8 percent of Healthcare.gov counties had three or more insurers. In 2017, only 44.3 percent of counties are on track to have this level of competition.

There are fewer competitive Healthcare.gov markets than ever before 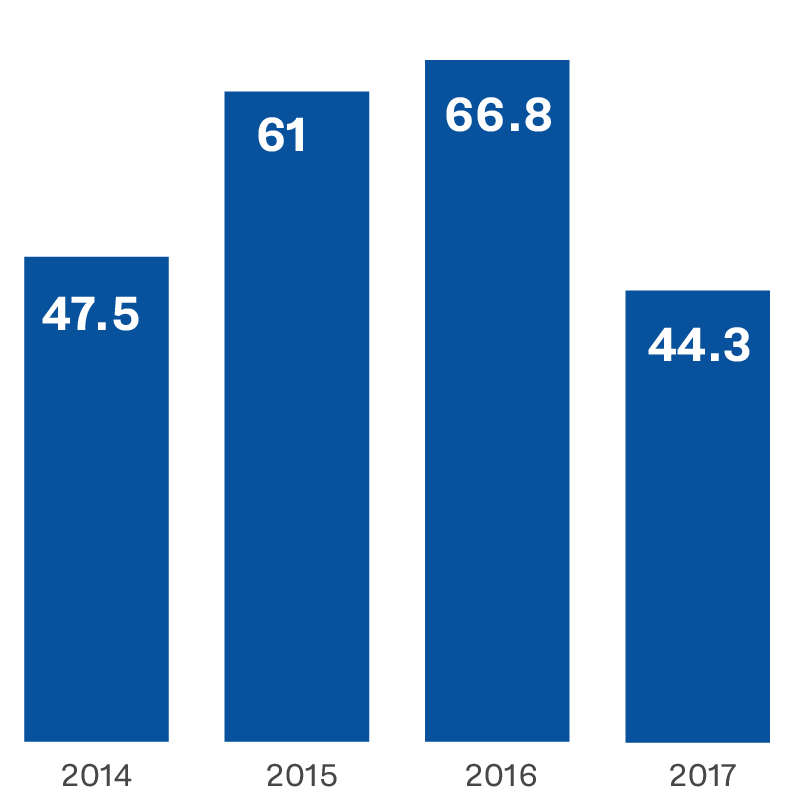 Obama administration officials say they are aware of the changes in marketplace participation and note that the situation is still in flux, with the possibility of more insurers joining the market before open enrollment begins.

"Entry and exit is a normal part of any market," says Mandy Cohen, chief operating officer at the Center for Medicare and Medicaid Services. "We're confident there are many places where folks will have lots of choices."

Competition on the marketplaces has certainly fluctuated over Obamacare's four-year life span. In 2014, Healthcare.gov launched with 500 counties served by just one insurer. More insurers joined up, and the number of one-insurer counties fell to 328 in 2015 and to 182 in 2016.

But our analysis — which uses data from Healthcare.gov, news reports, and interviews with sources at multiple health insurance plans — shows that 2017 is likely to be a year with many more exits than entrants. As a result, most Healthcare.gov shoppers live in an area where competition is currently decreasing.

Rural states like Alabama and Arizona are struggling to attract carriers

There are 38 states that currently use the Healthcare.gov platform for their insurance marketplaces (the rest have built their own websites). And the data reveals markedly different things happening in different places.

Arizona, for example, has seen one of the steepest declines in competition between 2016 and 2017, with both Aetna and UnitedHealth both exiting its market. There is now an Arizona county — Pinal County, right outside of Phoenix — that has no insurance plan signed up to sell. Last year, Pinal County had two insurers: Blue Cross Blue Shield of Arizona and All Savers Insurance Company, a division of UnitedHealth.

Administration officials say they're currently working to ensure that Pinal County residents do have a way to buy marketplace coverage come November.

In some rural places, you see competition backsliding. This is particularly true in Alabama. The state was a cause for worry back in 2014, when regulators had to scramble to find at least one insurer to sell coverage in rural areas.

But in 2015 and 2016, Alabama added more competition. UnitedHealth joined Blue Cross Blue Shield and Humana in the market. For the past two years, every Alabama county has had at least two insurers on its marketplace (and some counties have had three).

That changes this year: UnitedHealth and Humana are pulling out of the state, leaving Alabama with Blue Cross Blue Shield as its own only option.

Where is the marketplace still competitive? Mostly in large cities.

Of the 2,601 counties that currently use the Healthcare.gov marketplace, 1,152 have three or more carriers. Many of them are in more densely populated urban areas.

The area around Detroit, for example, has some of the strongest competition in the country. Wayne County, where Detroit is located, has 10 insurers signed up to sell in 2017 — as do neighboring Macomb and Oakland counties.

Cleveland residents will have access to eight insurers next year; people who live in Dallas or San Antonio will have five or more options.

The big cities in Texas are generally the places that are darker in the map above. But you can also see there are large swaths of the state — mostly more rural places — that don't have as much choice. There are still 72 counties in Texas with just one insurer planning to sell in 2017.

Much of the reduced competition in 2017 results from the exits of two major insurance plans: Aetna and UnitedHealth.

UnitedHealth announced in April that it would stop selling on the marketplaces after suffering more than $1 million in losses. Aetna followed in August, reducing the number of states where it sells from 15 to four.

There was an initial expectation that some smaller plans would come in and fill the gap these two large national plans had left. But so far, that hasn't panned out. When we reached out to plans that had previously announced their intention to expand into new markets, some told us they'd changed their minds.

The startup health plan Canopy Health, for example, initially planned to enter the Wyoming and Nevada marketplaces in 2017. This would be especially important in Wyoming, which currently only has one insurer. But Canopy had a change of heart as it watched other carriers get cold feet.

"We're actually regrouping and won't be on the marketplace this year but in 2018," said Tracy Fagin, a spokesperson for Canopy. Instead, Canopy is "reevaluating markets with all the turmoil."

In New Mexico, the local Blue Cross Blue Shield plan is reevaluating the initial plans it made to sell on that state's marketplace.

"No final decisions have been made regarding 2017," says Kristen Cunningham, a spokesperson for the health plan's parent company, Health Care Service Corporation. "Our goal continues to be providing quality, affordable health care coverage to as many people as possible. However, we need to be able to cover the anticipated costs of our members and also save for our members' needs in the future."

Insurers are still finalizing their 2017 plans

Cigna, for example, plans to expand in North Carolina around the Raleigh area as well as in Virginia around Richmond and the Washington suburbs. But spokesperson Joe Mondy declined to comment on the exact counties where Cigna plans to sell.

It's possible that some insurance carriers might see new opportunities in less competitive markets — that they can come in and offer a new choice to consumers. But so far, insurance plans haven't shown much interest. It's also still possible that before open enrollment launches, the marketplaces could continue to see exits as well.

Our map uses data from Healthcare.gov, news reports, and interviews with health insurance plans to show where companies plan to sell coverage in 2017. Want to use our data? Check it out here. See something we're missing? You can contact us here with tips or updates about what is happening near you.