How work has gotten better 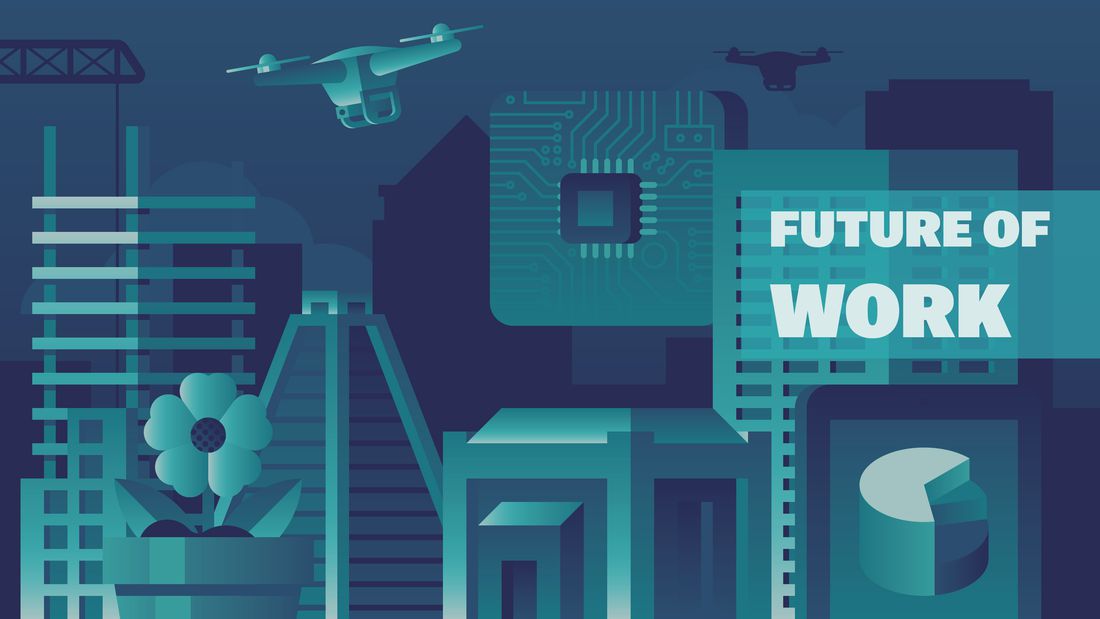 In a famous essay written over 80 years ago, John Maynard Keynes took stock of the "Economic Possibilities for our Grandchildren" and concluded that with the advance of technology and prosperity, there would be little need for people to work in the future. The primary concern, instead, might be difficulty finding an adequate quantity of fulfilling leisure activities.

George Jetson's futuristic job at the Sprocket factory was, similarly, depicted as involving two hours a day of work, with the employees so productive that there's no need to put in much time.

People do work fewer hours nowadays than before World War II. We also spend more years in school, and benefit from programs like Social Security and Medicare that ensure we'll be able to retire.

But most working people still have something recognizable as a full-time job. And one important segment of the population — women — have moved in the opposite direction, increasing the time they spend in paid market labor.

Some see that as evidence that we are stuck on a dysfunctional treadmill of conspicuous consumption — endlessly yearning after bigger houses and gadgets that people did fine without decades ago.

But a more likely answer is that the stark dichotomy between the drudgery of work and the pleasure of leisure is misleading.

People like time off, but they also like having a job. And work itself can be more or less pleasant. We've moved, over time, not simply into doing less work, but into doing work that contains less drudgery and more pleasure. We're taking some leisure on the job rather than strictly cutting back hours.

The future of work will involve even more mixing of business with pleasure, as employees agitate not to avoid working entirely but to simply remove the most onerous aspects of it to better pursue some leisure through labor.

Work has become a lot safer

Work can be unpleasant in many ways, but literally dying on the job is high on the list of really bad days at the office. The good news is that it's become much less common. A 1995 paper by Thomas Kniesner and John Leeth showed that the long-term trend in the United States was toward workplaces becoming much less fatal: 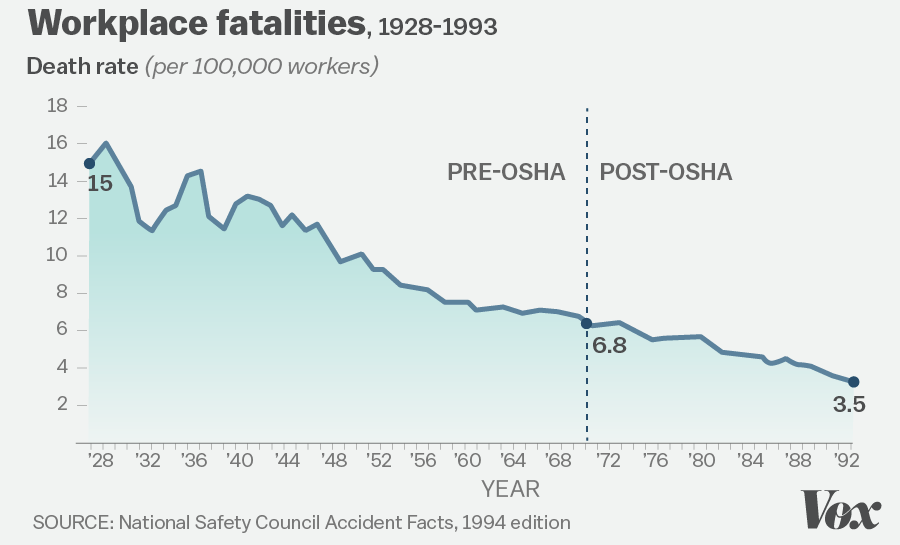 More recent data from the Bureau of Labor Statistics (not directly comparable because of methodology changes) shows that the overall number of workplace deaths has decreased since the early 1990s, even as the population has grown: 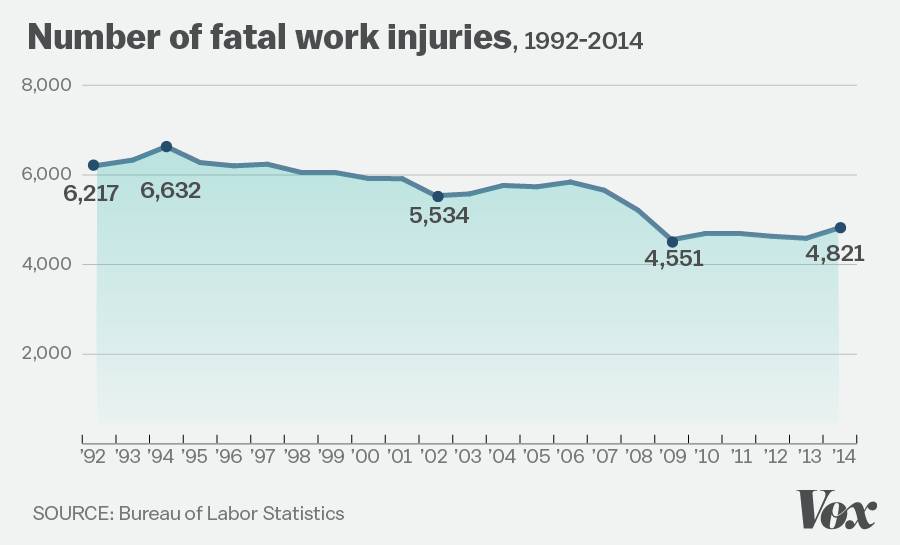 This is one of the great quiet triumphs of recent American economic life. It speaks to the success of workplace safety measures, but also to an underrated upside of American work transitioning into the service sector. But work in the shrinking manufacturing sector and other classic blue collar trades is deadlier than work in the growing retail, health, and education sectors.

Work is closer to home

People have become, over time, markedly less likely to move to a different state to get a job.

This has prompted a certain amount of fretting from some pundits that people may have become too immobile and lacking in initiative for their own good.

A common counterpoint holds that financially struggling Americans may be too poor to move. But this is unlikely. Despite the struggles of the past few years, the typical American household in 2016 is significantly richer than it was in more-mobile 1976.

The truth is more likely the opposite — people have always had lots of good reasons not to move for work (it's nice for your kids to see their grandparents) — and today's economy makes it easier to get by without doing so. There are important exceptions (New York for finance, the Bay Area for high-tech, DC for politics), but by and large America's regional economies are becoming less specialized.

People are doing the same kind of work — preparing and serving food, teaching kids, taking care of the sick, selling things in stores — in virtually every metropolitan area. So for most people, it's not necessary to move to find work suitable to their skills.

Your computer is a mighty shirking machine

Both the decline in workplace deaths and the decline in moving for a job are largely working-class phenomena. More privileged highly educated workers are more likely to relocate and have always been relatively safe from on-the-job injury.

What we get instead are computers.

The ubiquity of digital equipment in the modern office is so striking that it's spawned a vast economics literature around what's known as the Solow paradox. The computer revolution, legendary economist Bob Solow first observed in the late-1980s, is visible everywhere except the productivity statistics. Indeed, the digital era has been associated with a slowdown in the rate of measured productivity growth throughout the American economy.

Yet it's clear that in many ways digital tools — email, web search, document sharing, etc. — really are making us more productive workers. The problem (or, rather, "problem") is that they also make us better shirkers.

It's surely not a coincidence that the hottest enterprise software startup on the market is a messaging service literally called Slack. And Slack is great. It lets our team at Vox collaborate in ways that were unimaginable five or 15 years ago.

This is obvious to any digital journalist who's ever looked at web traffic statistics — people are consuming a lot of content during business hours, and very little during weekends, evenings, and holidays. In other words, while we sit at our desks churning out copy, other people are sitting at their desks reading it when they're supposed to be working.

Work is a force that gives us meaning 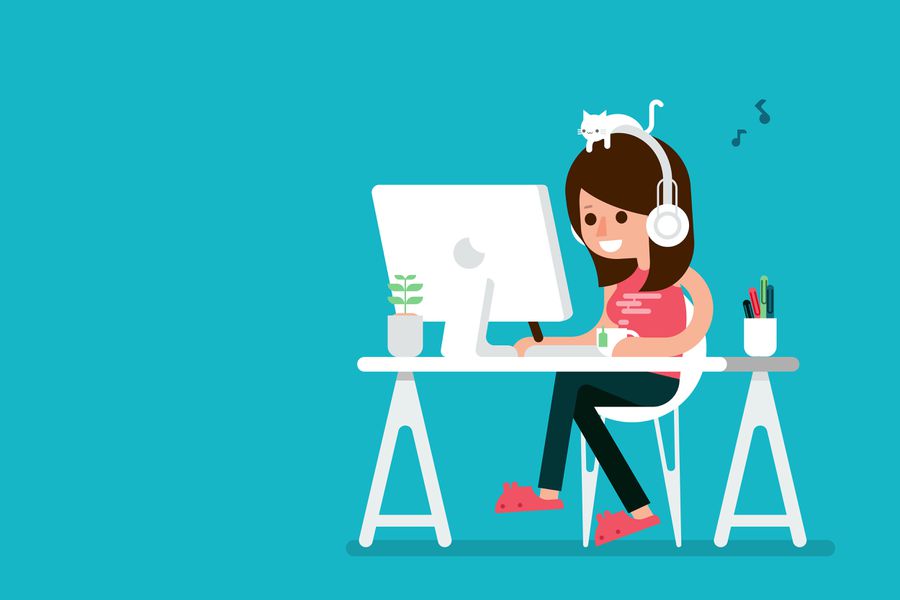 It's conventional wisdom, of course, that it's better to have a job than to be unemployed. But crucially, that's not just about the money.

A fascinating 2012 study by Clemens Hetschko, Andreas Knabe, and Ronnie Schöb looked at what happens to the subjective well-being of older long-term unemployed people when they become old enough to count as "retired" in the German social insurance system. This does not involve any shift in their material resources or their daily activities, but does make them happier.

What was missing from their lives as unemployed people, in other words, was not just money but the sense of identity and meaning that we derive from having a profession.

That's why work is unlikely to greatly diminish in a more prosperous future. Instead of avoiding work, people will increase their leisure by trying to shave off the rough edges of the work experience. Expect workers and regulators to demand continued improvements in workplace safety. Expect more comfortable workspaces, more flexibility about hours and teleworking, more generous family leave, more and better snacks. Expect higher standards in the equipment we use — and a continued blurring of the line between office collaboration and mere socializing.