Why the elevator could be the next great disruptive technology 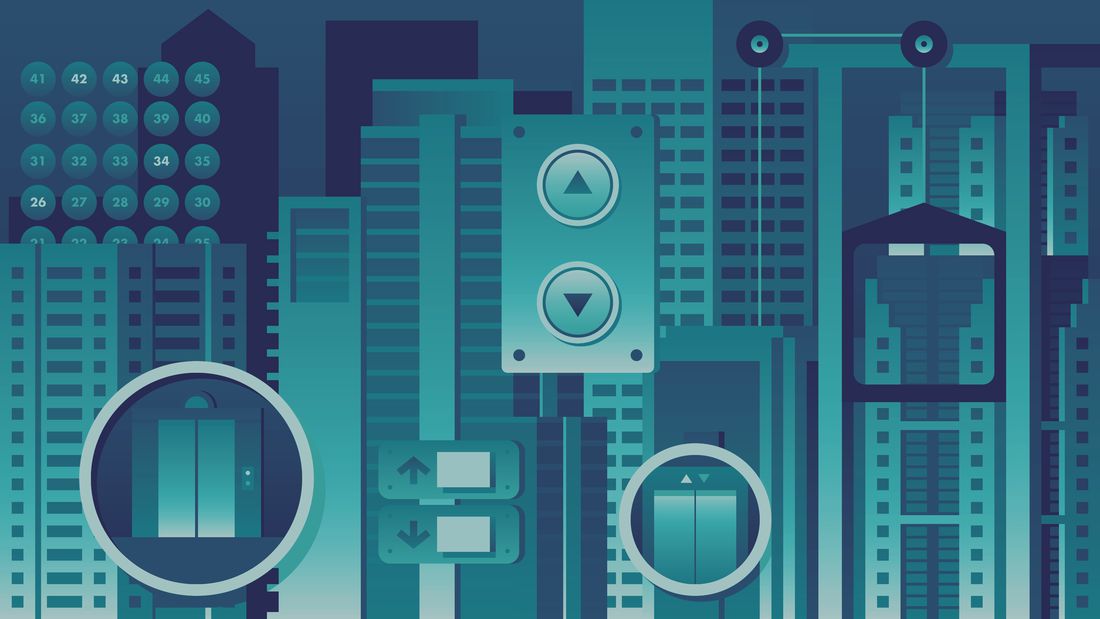 The old manufacturing economy allowed vibrant, globally competitive industries to establish themselves in essentially arbitrary locations. All factories needed was access to the national transportation grid so that raw materials could flow in and finished products could flow out.

The information economy, in somewhat tragic ways, hasn't had this quality. Half of the jobs created during the 2010-'14 recovery cycle were in these 73 counties, home to only about a third of the nation's population: 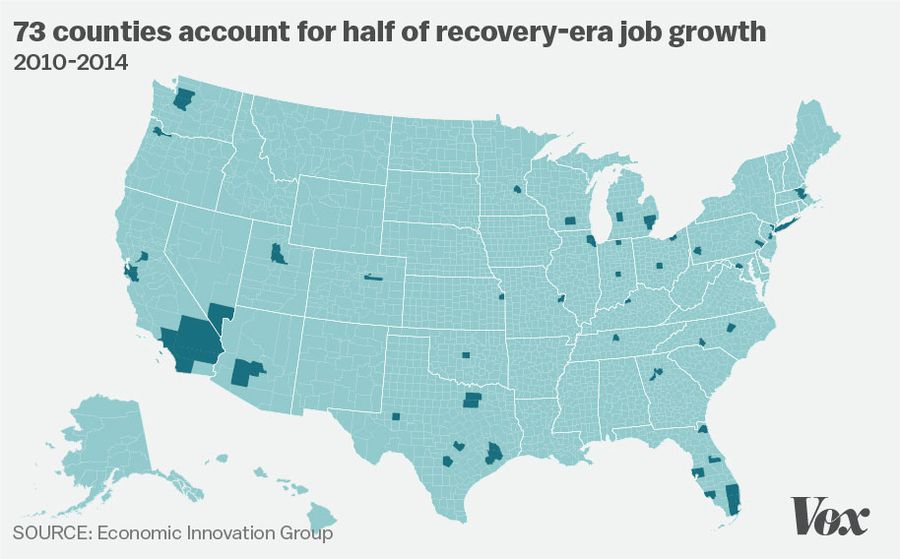 And the area where globally competitive industries support good-paying jobs is even smaller. The United States is a juggernaut of the digital technology, finance, entertainment, and biotech industries, but they are concentrated rather narrowly in the Bay Area, Seattle, and the Northeastern megalopolis.

These are all great places to live, and just as factories served as economic anchors for regions, today's big industries produce broader local prosperity.

Here are some examples from the San Francisco area:

The problem is that for most residents of these places, the higher cost of living erodes the benefits of higher pay.

But living there is too expensive for many people

But these cities have something in common: They're expensive. Much more expensive than the average American city.

That's not a huge problem for the well-paid professionals who sit at the top of those industries.

On one level, it's not surprising that living in these places is expensive. Coastal metropolitan areas are, by definition, hemmed in by the sea. And in the Northeast they are hemmed in by each other, with states like Maryland, New Jersey, and Connecticut acting as continually developed suburban zones around and between urban areas.

The very dynamism of the industries located in these cities further drives up cost, as would-be renters and homeowners need to compete with billionaires, hotels, and office buildings for living space.

Exactly how best to quantify the concept of cost of living is, of course, contentious. But work by the Economic Policy Institute on realistic family budgeting suggests it takes almost 60 percent more to get by in the New York City area than in the Dallas–Fort Worth metroplex.

Under the circumstances, it's no surprise that people without specialized, industry-specific skills are tending to move away.

Bay Area and Northeastern counties are actually generally seeing more Americans move out than move in over the past decade, even as Americans are moving less frequently than they did a generation ago.

And the problem with service workers moving away from the coasts is that their jobs really do pay more when they're done in a robust local economy. When Americans flee from the metro areas that house our most dynamic industries, we end up collectively fleeing from a more prosperous future.

The good news is that two major technological innovations from the late 19th century offer the solution.

Sidney Gilchrist Thomas's 1879 improvements to the Bessemer process for steelmaking made it feasible to construct buildings out of a "skeleton" of steel beams on which walls and other structures could be hung. That made it possible to build much taller buildings than can be made out of stone or brick.

The problem is nobody wants to walk up 20 flights of stairs to get home. But (not coincidentally) over the subsequent decade, enormous progress was made in elevator technology.

Elevators are a transportation breakthrough that made steel frame construction genuinely useful. With steel frames and elevators, it became possible to fit an enormous square footage of usable floor space on a small plot of land. In other words, tall apartment buildings make it possible for there to be plenty of housing for everyone even where land is scarce.

Unfortunately, while these basic technologies are familiar to most Americans, they are shockingly rare in practice. Even inside the city boundaries of San Francisco, about half the land is set aside for single-family homes, leaving the city less than half as dense as Brooklyn.

And in the suburban counties south of San Francisco that comprise Silicon Valley proper, the prohibition on multi-family house construction is even more severe. 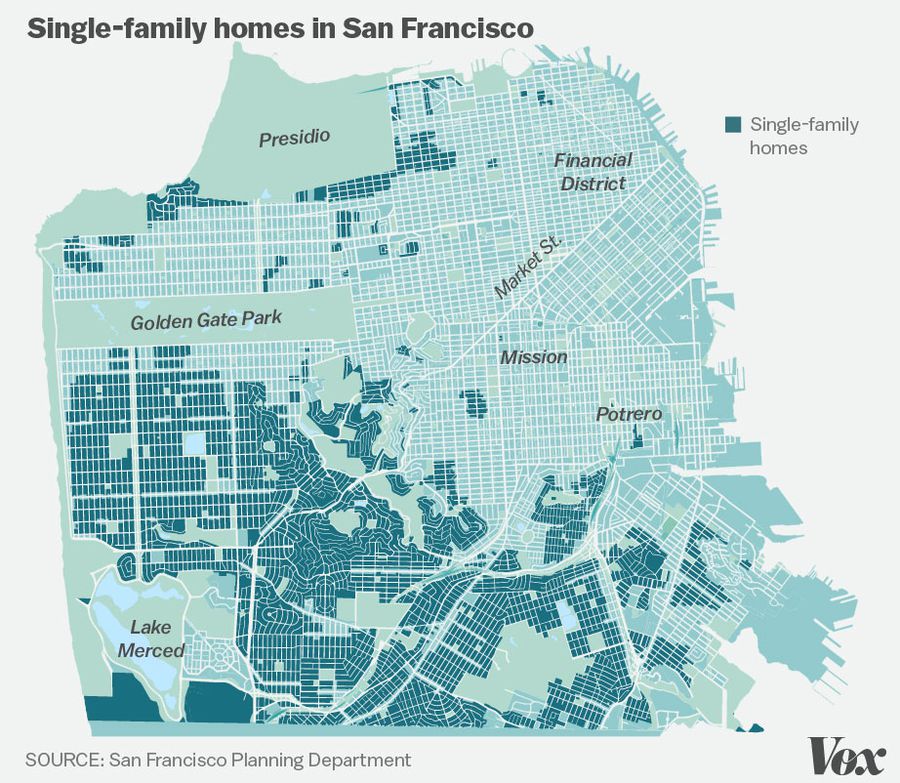 The Northeast is denser. Its core cities were built out before the car and highway boom of the 1950s encouraged the modern suburb. But during the 1960s and '70s, it, too, was largely frozen in place by new zoning codes that have prevented the expansion of multi-family housing.

It's true that many people prefer a single-family home, all else being equal. But what makes the elevator so disruptive is precisely the reality that all else is not equal.

When land is scarce and in demand, an insistence on broad single-family zoning creates some very difficult trade-offs. The houses in the most desirable spots become very expensive. And the frontier of affordability sprawls out to an annoyingly long commute. Apartments — cheaper and more conveniently located — bust up that old set of trade-offs.

If elevators were more widely used, they could unleash not just a boom of new construction in America's most expensive areas but an important secondary boom of higher wages for workers at all skill levels. The technology to do it has been with us for more than a century — if we want to use it.