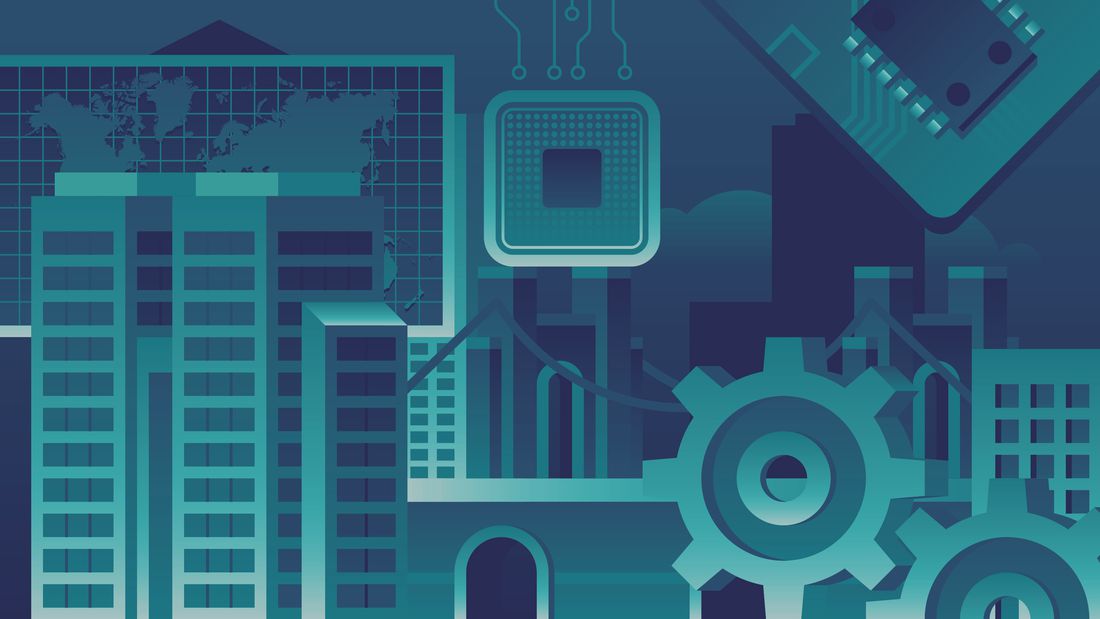 The economies of the United States and other rich countries — Japan, France, Canada, Switzerland — are often characterized as "post-industrial," meaning they’re developed to the point that most of their citizens work in the service sector rather than in factory assembly lines. In the popular imagination, the old industrial landscape has moved abroad to Mexico or to China, perhaps due to bad trade policies or simply the vicissitudes of changing circumstance.

The good news is that the migration of factory work to much poorer countries has been a boon to those countries' economic development, helping spur an unprecedented decline in global poverty.

And here's where the news gets bad again.

Dani Rodrik, an economist at Harvard University who's devoted his career to the interplay between globalization and economic development, recently documented a trend called "premature deindustrialization," in which countries start to lose their manufacturing jobs without getting rich first.

"Developing countries," he writes in an important paper published last year, "have experienced falling manufacturing shares in both employment and real value added, especially since the 1980s."

Deindustrialization is especially severe in Latin America and Africa

Mexico is a case in point. As Americans are well aware, a number of large multinational firms have begun to locate manufacturing jobs south of the border to take advantage of Mexico's combination of relatively low wages and relatively easy access to the US consumer market.

These jobs are a boon to Mexican workers because their wages — although lower than those of American factory workers — are much higher than what's available to the typical Mexican. And these Mexican workers are almost as productive as their foreign competitors. That wage gap should drive rapid expansion of Mexican manufacturing, economy-wide increases in productivity, and overall higher living standards.

The truth, as reported in an important McKinsey study by Jaana Remes, is that economy-wide productivity growth in Mexico has been dismal. The reason is that the Mexican manufacturing sector has actually remained quite small.

"A modern fast-growing Mexico with globally competitive multinationals and cutting-edge manufacturing plants co-exists," she writes, "with a far larger group of traditional Mexican enterprises that do not contribute to growth."

The dynamic manufacturing sector, in other words, simply isn't big enough to employ many people. And it's not really growing much as a share of the Mexican economy. The report itself diagnoses this largely in terms of Mexico-specific factors, but the upshot of Rodrik's research is that Mexico is fairly typical of the experience across Latin America, Africa, and the Middle East — and not totally unusual in Asia, either.

Structural change is moving in the wrong direction

In a separate paper, "Globalization, Structural Change, and Productivity Growth," Rodrik and co-authors Margaret McMillan and Iñigo Verduzco-Gallo show a useful quantification of these trends. They group the world into four regions — the rich countries (labeled "HI" for high-income on the chart below), Asia, Latin America, and Africa — and then they break productivity growth down into two component elements.

On one hand, there's productivity change within a given sector of the economy — health care, information technology, mining, etc. — and on the other hand there's "structural" change, when workers move out of a low-productivity sector and into a high one.

Here's what they found: 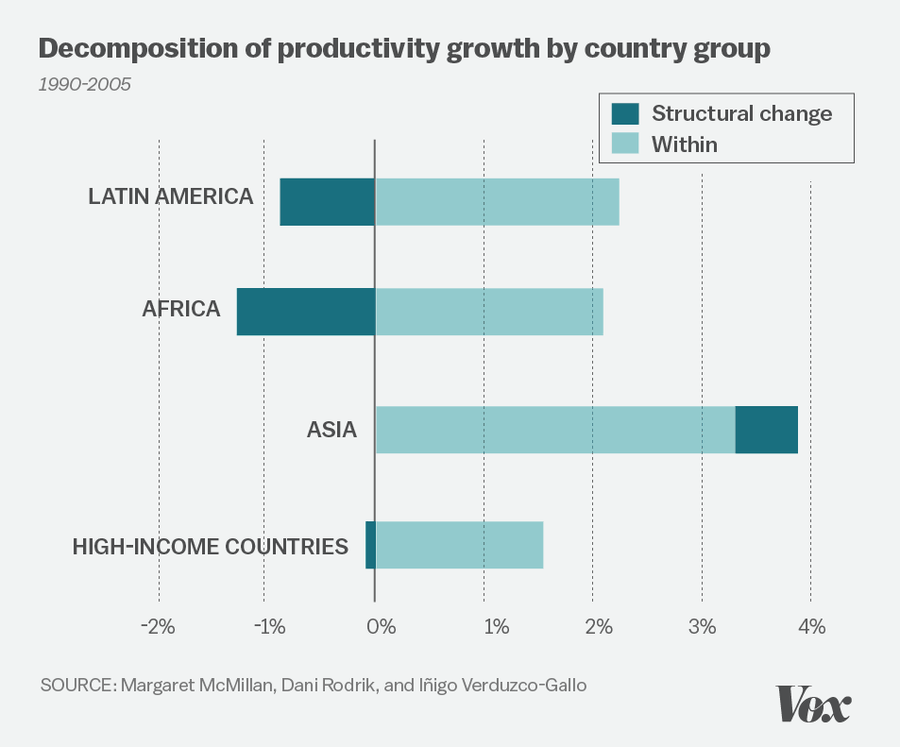 Though Africa and Latin America did not experience within-sector productivity growth that was as impressive as what happened in Asia, they did grow quite quickly by that metric — faster than the group of rich countries.

But while Asia bolstered its productivity growth through structural change, Latin America and Africa did the reverse. Workers shifted out of highly productive lines of work into small-scale shopkeeping and other low-productivity industries.

And even in Asia, positive structural change didn't happen everywhere. Premature deindustralization has been witnessed in India, for example.

One big cause of all this is China. Much as Americans may perceive China as the great devourer of manufacturing employment here, the truth is that manufacturing jobs as a share of all jobs in the United States has been shrinking since the end of World War II — long before China came on the scene as a competitor. It's poor countries that have felt the new China impact and the trend toward deindustrialization.

And there's a big difference between deindustrialization in rich and poor countries.

In the United States, for example, actual industrial production has risen sharply since 1990. Jobs are vanishing in part because the remaining workers — assisted by increasingly advanced machines — are growing more productive. This trend toward automation can be painful for workers in countries at any level of economic development, but it's especially dire for the kind of developing nations that might have hoped manufacturing would help them get on the ladder to prosperity.

That's because increasingly automated, increasingly sophisticated manufacturing enterprises will increasingly look more like software companies — where designing, programming, maintaining, and debugging the machines will be more important than staffing them. A country like the United States with a very robust high-tech sector will be a strong contender for those technologically intensive manufacturing jobs, even if there aren't very many of them. Countries that haven't yet industrialized, meanwhile, may be left out in the cold.