Automation is making human labor more valuable than ever

By: Timothy B. Lee 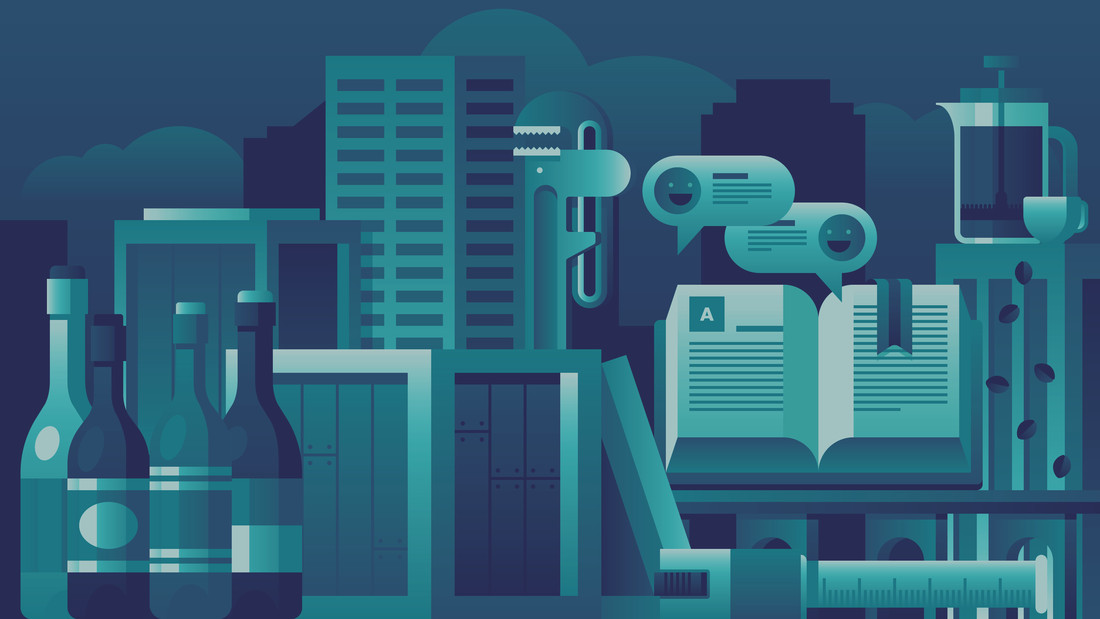 The modern economy was built on automation, so it's natural to assume that the future will be defined by automation as well. It seems like every week there's a new study or think piece about the job-destroying potential of robotics and artificial intelligence.

But our collective obsession with job-stealing robots can cause us to overestimate the impact of automation — and obscure an important point about the economy. In many service industries, human labor is a mark of luxury.

So at the same time robots destroy manufacturing jobs, the demand for labor-intensive services is soaring.

We can see the signs of this all around us. There's the rise of Etsy, an online marketplace whose main selling point is that the products are not mass-produced. There's the craze for restaurants with organic, locally sourced ingredients that often come from smaller, less mechanized farms. There's the exponential rise in the number of small wineries and breweries where a personal touch — and often a tour of the facilities — is a big part of the selling point. 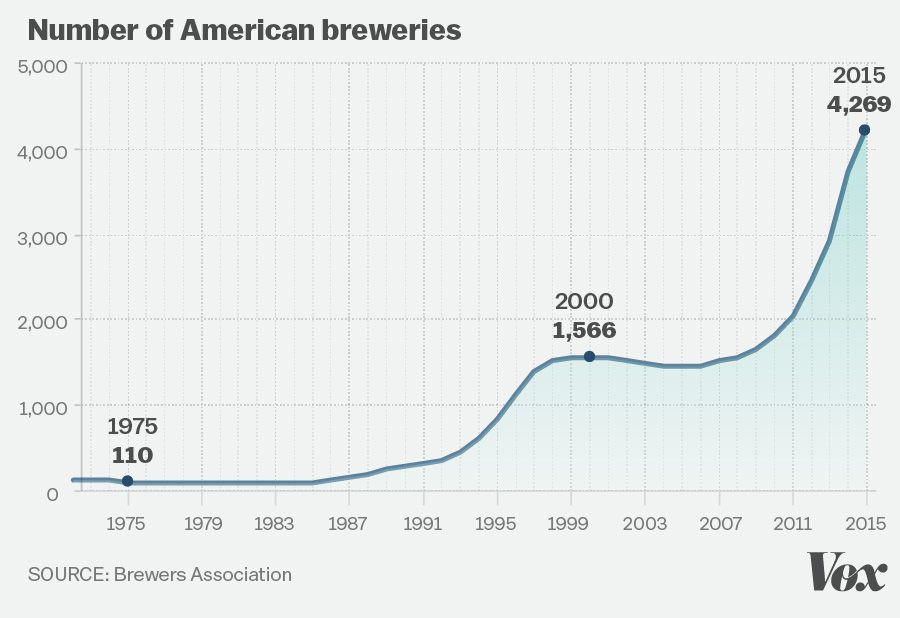 These are all cases where greater automation is technologically feasible, but companies are using their lack of automation as a selling point. They're doing this because customers like the feeling of a personal connection to the farmers, brewers, and artisans who make the products they're buying.

As automation makes everyday products cheaper and more plentiful, people will increasingly shift their spending to goods and services where a connection to a human provider is seen as a key benefit.

At coffee shops, inefficiency is a mark of luxury

"Amid customer complaints that the Seattle-based coffee chain has reduced the fine art of coffee making to a mechanized process with all the romance of an assembly line, Starbucks baristas are being told to stop making multiple drinks at the same time," the Wall Street Journal reported in 2012.

A Starbucks barista in Minnesota griped that the new rules had "doubled the amount of time it takes to make drinks in some cases." That's not only bad for the bottom line; it can also inconvenience customers by creating longer, slower lines.

But Starbucks management understood something important about their business: People don't go to Starbucks simply to get a cup of coffee — after all, there are lots of cheaper and faster ways to get coffee. People go to Starbucks because they enjoy the experience. And that experience has an important performative dimension — customers want to feel like their barista devoted personal attention to preparing their cup.

And Starbucks is hardly the most upscale coffee shop around. Serious coffee snobs refuse to drink the stuff, preferring independent coffee shops with exotic fair-trade beans. The process of making coffee at these stores is often even more elaborate and labor-intensive than at Starbucks. And because these shops are often smaller and don't have the Starbucks brand pulling in customers, baristas tend to serve fewer customers — often leading to higher prices.

But a lot of coffee lovers don't care. They believe that elaborately prepared artisanal coffee is better than the mass-market stuff, and they're willing to pay a premium for it. This helps explain why there continues to be a big market for people to make coffee, even while coffee machines get ever more sophisticated.

Labor-intensive services are the future of the US economy

Coffee is far from the most important industry in the US. But similar trends can be seen in large swaths of the American economy. 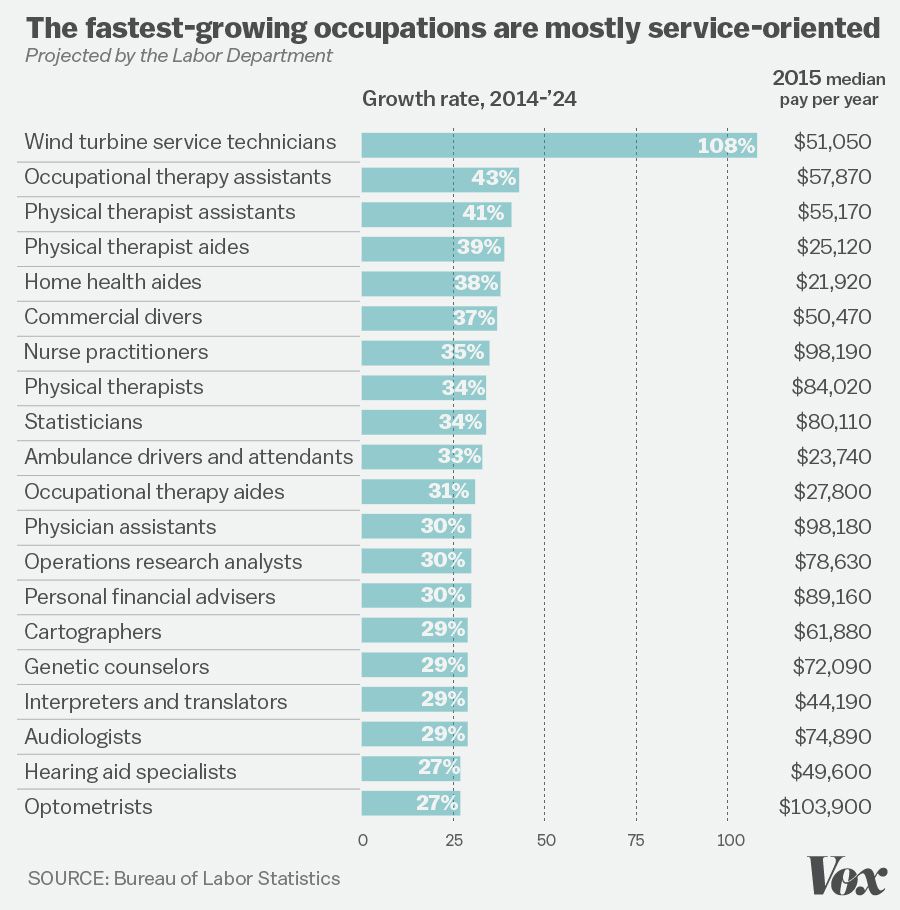 In some cases, growing demand is driven by an aging population with greater need for personal care. But that's not the whole story. Occupations like nurse-midwives, genetic counselors, and diagnostic medical sonographers are also expected to see robust growth. They mostly deal with pregnant mothers, and government statistics don't project a rapid increase in childbirth over the next decade.

In a sense, it's possible to automate many aspects of these jobs. Instead of having a therapist come to your home, someone could send you a video demonstrating therapy techniques. A website could ask the patient questions and recommend exercises. If these resources proved insufficient, the patient could hop onto a videoconferencing app for some personal advice.

For someone who needed therapy care, this kind of semiautomated therapy service would probably be better than nothing. But it's a lot worse than having a face-to-face meeting with a human being who gives you her undivided attention. Indeed, talking about "automating" this kind of job seems like a category error. "Therapy" delivered by an app or even a robot is a different kind of service, just as coffee delivered by a vending machine is a different kind of service than a cup of coffee prepared by a human barista.

Another example: There's been a lot of excitement about massive open online courses and other internet-based learning platforms. And the prospect of giving anyone in the world access to information from the world's best universities is certainly exciting.

But MOOCs are unlikely to ever pose a serious threat to conventional four-year colleges. Face-to-face interactions with professors and other students provide a lot of value that can't be captured in a YouTube video. College students have an opportunity to join clubs and sports teams, build a social network, fall in love, and benefit from personal mentoring. It's probably not possible to automate these aspects of the college experience, and no one would want to.

Over time, technological progress is steadily wringing inefficiencies out of manufacturing processes. But in service-related industries, the "inefficiencies" involved in talking to other people are often a key benefit. So as America continues to get richer, we should expect these services to account for a larger and larger share of economic activity.