Here’s the best argument that computers could replace doctors, teachers, and even nannies

By: Timothy B. Lee 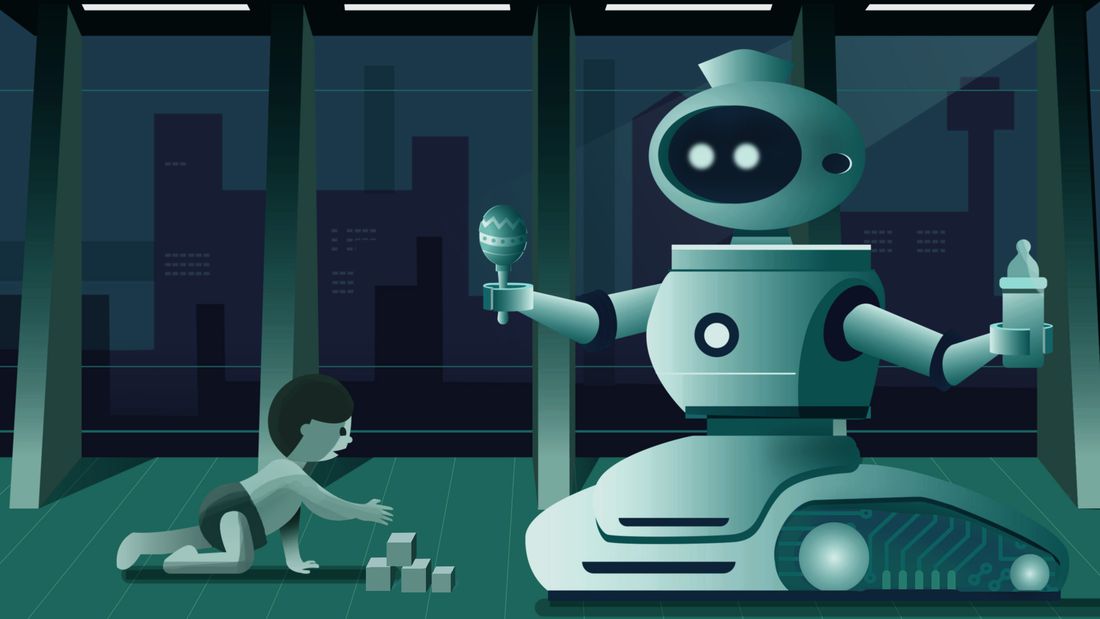 Artificial intelligence is improving rapidly, and a lot of people are worried that it will lead to massive job losses. In the past, technology mostly displaced workers doing routine tasks or manual labor. But as software becomes more sophisticated, there’s a growing prospect that truck drivers, teachers, and perhaps even doctors could see their jobs replaced by a robot or a computer program.

Ryan Avent is an economics correspondent for the Economist who has been thinking about the economics of automation for several years. He’s a technology optimist — he thinks software and robots really will massively boost economic productivity. But in a new book, he argues that this won’t necessarily be good news for ordinary workers, since a glut of underemployed workers will make it harder to bargain for higher pay.

I’m skeptical. I suspect that most jobs in the US economy won’t be threatened by automation anytime soon. And I’m more optimistic about the economy’s ability to absorb those workers whose jobs are eliminated by technological advances.

We spoke at Vox’s Washington, DC, headquarters in mid-August. The conversation has been edited for length and clarity.

Timothy B. Lee: Some economists (like Robert Gordon, whom I interviewed here) argue that technological progress is slowing down. You argue they’re wrong. What are the big breakthroughs that pessimists are missing?

Ryan Avent: Information technology and machine learning have the potential to change the way we do almost everything. They’re going to change transportation with driverless cars. There's also the possibility of transforming all sorts of service industries.

If it's just as good to talk to something like Siri as it is to talk to someone in person — if computers can parse human language and come up with commonsense answers — then that sets a pretty hard limit on wages for a lot of people. If someone writes a good fast-food service agent program, it can be used in restaurants all over the world.

We think about therapy as being a job that is uniquely suited to humans, but I'm not sure that's right. In a lot of ways people might feel more open talking about difficult topics with a skilled AI than they would with a person. That might be true of medical diagnosis as well. Things that you're embarrassed to discuss with a doctor you could talk to a computer about.

As with electricity, it's hard to know what all the applications are going to be. But I think we should be pretty optimistic that given the right conditions there will be quite a lot of them.

TBL: Is it really so easy to replace a service with an automated version? For example, you can think of an exercise video as an automated version of a fitness class. People 40 years ago might have said if everyone has a DVD player, fitness instructors were all going to go out of business because everyone will get a $20 DVD instead of paying $10 for each class.

That obviously didn't happen. People like getting instruction from a flesh-and-blood human being. There's a motivational element. And it’s more fun to work out in a room full of other people instead of by yourself at home.

I wonder if a lot of occupations are like that. If face-to-face interaction is a key part of what you’re paying for, then an automated version might not be so appealing.

RA: We're going to learn how much the different components of these jobs matter. Think about something like education. How much of it is the need for interaction with someone rather than information you can get out of a book at your own pace? How much of it is motivational?

Computer programs are going to get better at playing some of these roles. As gamers will tell you, programmers can be pretty skilled at finding ways to motivate people to feel like they're interacting with humans even when they're dealing with an AI.

I think if you take fitness instruction, for example, it doesn't seem outlandish that we'd have programs that can see pretty clearly the motions you're making. We already have the Xbox Kinect, which can see what you're doing and then is able to tailor feedback to you individually. Maybe someone will pair that with some kind of bot or personality that you come to see as your instructor in a way that's maybe not quite as good as a human instructor but sure to be much, much cheaper.

Another question is how many human workers are actually suited to these kinds of jobs. If you think about a 50-year-old man who's been laid off from a job in a mine, there's no prospect of him becoming a fitness instructor that millennials will want to pay money to work with. It's not that I don't think there are jobs there; I just think they're of a scale that just doesn't address the issue.

TBL: Child care seems to me like another industry with very limited opportunities for automation. I’ve never heard of anyone trying to build a child care robot. Parents want their kids interacting with other caring adults, not computer screens or robots.

RA: You can imagine there is a subset of the population that make amazing nannies. But as you work your way down the ladder, you eventually find your way to folks who are more likely to sit around fiddling with their phones when your kid is playing. Eventually you get to people who drink on the job or sell the kid to the adoption agency. There's a point at which technology of any sort becomes preferable to the human alternative.

I'd rather have my daughter sitting at the computer than with someone wildly irresponsible, and I think it's possible that as technology improves, that point where there's a trade-off will work its way up the distribution of talent. You were saying there's always going to be a market for people who want a human touch. The question is where is the cutoff point. I think you see the sorts of programs that kids interact with on iPads and computers are becoming more clever and interactive; kids aren't passive watchers of these things.

With better technology, it becomes easier to say we're going to go from this preschool where there are five humans working all the time to this other one where there's one skilled overseer and AI or robots do most of the work.

TBL: But are parents really going to be happy with a child care option where kids are mostly interacting with computers? Lots of parents strictly limit kids "screen time" because they think too much of it is harmful. I think most parents will see love and attention from a human being as essential in any child care service.

RA: I think you're right, but I also think our perspective on this is shaped by our socioeconomic status. In other corners of the country, things don't work quite the same. Parents dump their kids in places where they don't get a lot of hands-on attention and stimulus.

The question is how good can AI become, really? A lot of the nannies my neighbors have are really good at taking care of the kids, but they don't necessarily have the skills to teach the kids a computer language. I think there is a lot of scope for machine learning and robots to get better at this sort of thing. There’s much less scope for your typical middle-aged, blue-collar worker to get better at these kinds of things.

And then there's a cost difference. If someone needs $25,000 per year to stay alive, that is not very much in terms of income, but it's a hell of a lot for people who are paying that in child care fees. So if you can come up with a different model that relies much less on humans and instead relies on technology that can be sold all over the world, and can therefore be pretty cheap per unit, that's a big savings.

TBL: What trends should we be watching to see if this kind of automation is really happening? For example, massive open online courses (MOOCs) have existed for a few years now, and a lot of people are using them. Yet I’ve never heard of anyone saying, "I got into Harvard, but I decided to save $200,000 by doing a MOOC instead."

Is the issue that the technology isn't good enough yet? Or that it takes time for word to spread about it? Or are online courses not a direct competitive threat to traditional universities?

RA: I think there are a few different things we should look for. One is that at the beginning, MOOCs are going to displace the things that look most like them. That's not a Harvard education. What we don't often think about is that probably most of the degree courses that people are taking are not at competitive institutions. They're not taught by highly skilled professors who are publishing research. They're generally following a preset curriculum without a lot of value added by the professor or TA.

It's in those situations where MOOCs are a pretty good substitute for the education students have available to them. MOOCs also have key advantages, like flexibility. You can repeat a course over and over again if you need to.

We are seeing steady gains by MOOCs in emerging markets and in adult education. Will that eventually translate into displacement of four-year degree programs at Michigan or Harvard? That's probably quite a ways away. But the bulk of your employment is not at places like Harvard.

TBL: Your thesis is that technology has gotten so amazing that we can produce a ton of stuff with a limited number of workers. But this seems like a problem we should be able to solve with monetary policy. The conventional view is that if there’s too little demand for workers, the Federal Reserve can address the problem by expanding the money supply. As more money circulates through the economy, people buy more goods and services until workers get scarce and wages start to rise. What’s different today?

RA: I don't necessarily disagree with that. But imagine that we've got the accelerator all the way down and unemployment starts to fall, and we get growth of real wages. I think at that point we start to see much more investment in labor-saving technology, and that places a limit on how much of growth can flow to workers rather than owners of capital. That creates this constant drag on demand.

The way you get around that is that when you keep your foot on the accelerator, prices rise by more than wages. So real, inflation-adjusted wages fall. And then it's cheaper to employ workers in low-productivity tasks. The result might be that you have 15 greeters working at the Walmart. The result might be that rich people wind up having a larger staff of servants in their households.

But critically, for there to be decent wages for a household staff, for instance, those people need to be living in the same metropolitan area as the people employing them. And the rich don't necessarily want lots of people sharing their metropolitan area with them.

So I don't necessarily disagree with you. I just don't think a world in which employment grows and grows and grows because real wages stay relatively flat is one that is politically sustainable.