Dirty air can be deadly. Here’s how to protect yourself.

The Air Quality Index can warn you about wildfire smoke and pollution in your area. Here’s a step-by-step guide.

Share All sharing options for: Dirty air can be deadly. Here’s how to protect yourself.

The United States has faced nearly 44,000 wildfires this year alone, and altogether they have burned an area the size of New Jersey. Every one of these fires kicks up tiny particles of liquids and solids, each a fraction of the diameter of a single human hair. These particles can travel for thousands of miles and remain suspended in the air for weeks. Fires in California have polluted the skies as far away as New York City.

Microscopic particles in the air, whether from wildfire smoke or other sources of air pollution such as industrial and automobile exhaust, are dangerous: Their size allows them to penetrate deep into the body, even entering the lungs and bloodstream.

“It triggers some inflammation in the body that can do everything from destabilize plaques in our blood vessels and cause heart attacks, or even cause inflammation in our neurons,” said Aaron Bernstein, a pediatrician who leads the climate center at the Harvard T.H. Chan School of Public Health. “The more we look, the more we realize that pretty much no part of our body is spared from this exposure to air pollution.”

Air pollution is one of the biggest modern threats to human health, and scientists have learned that small particulate matter, or PM2.5, can cause damage even in small doses. Although US air quality has improved over time due to legislation like the Clean Air Act, a recent report found that global air pollution reduces global life expectancy more than terrorism, alcohol and drug use, unsafe drinking water, HIV/AIDS, or malaria. Other research suggests wildfire smoke increases the chance of death from Covid-19: A recent study estimated that 17 percent of Covid-19 deaths in the US may be linked to long-term exposure to air pollution.

In short, air quality is often a more accurate indicator of the dangers to public health than the weather forecast alone, but many people pay much less attention to it. One measurement aims to change that by distilling all of this high-stakes information: the Air Quality Index (AQI). Understanding the AQI can help you plan your day and protect yourself, just as rain in the forecast tells you to bring an umbrella with you when you leave home.

“It’s a way to flag for folks the basic precautionary actions — to say, ‘The air quality is not great, I still want to go outside and do this, but I’m going to set my alarm so that in an hour I’m going to take a break and make sure I’m not running into trouble,’” Bernstein said.

Here’s a step-by-step guide to understanding the importance of the AQI, including several resources from the Environmental Protection Agency (EPA) to help you track the AQI in your community.

Where to look for air quality information in your area

Experts consider the EPA’s AirNow website the gold standard for air monitoring in the US, and it can be a one-stop shop for understanding the AQI in and around your community. Type in your zip code, and the website will pull data from permanent air monitors in your area, 365 days a year.

AirNow, which partners with state, local, and tribal agencies as well as the US Forest Service, tracks two main sources of pollution. One is ground-level ozone, which tends to be worse in the late afternoon on hot summer days and can cause lung damage and asthma attacks. The second is the main concern in wildfire smoke: particulate matter.

The EPA shares AQI measurements that range from zero to 500; the higher the AQI, the greater the level of air pollution. An AQI of 75 could pose a slight health risk, while an AQI of 210 means the air is so polluted that you should stay indoors and protect yourself.

The biggest drawback to the Air Quality Index is that it misses the granular picture in communities where the EPA doesn’t have sensors. Since air pollution can vary widely even over short distances — think a busy highway versus a quiet, tree-lined road — the EPA may be missing some data for the places that face the worst pollution.

The EPA and US Forest Service in 2020 launched a new database that attempts to fill in some of these gaps. The Fire and Smoke Map supplements the EPA’s official measurements with temporary and crowdsourced sensors (such as low-cost monitors from a company called PurpleAir) to show current measurements for the PM2.5, the biggest threat from wildfires.

The map contains a trove of information, and you don’t have to guess where it’s getting its information: The source is identified with symbols (circles for EPA monitors, squares for temporary monitors, and triangles for crowdsourced data from third-party, low-cost monitors like those from Purple Air). Click on your area to find local information, or swipe through to find past pollution measurements and forecasts for the day (whether the pollution is likely to get better or worse). 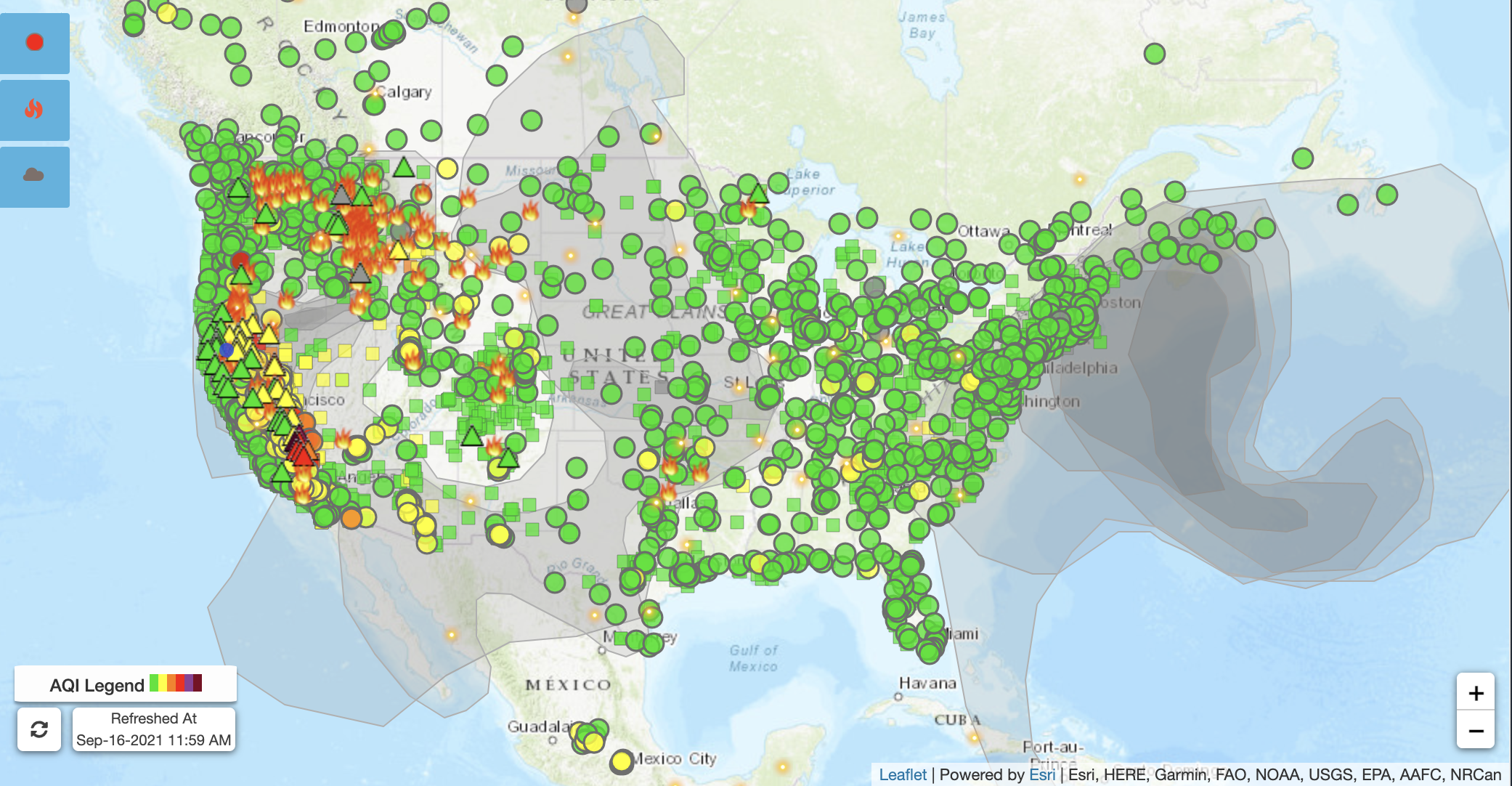 The map on the left shows current air quality (ozone and PM2.5) based on the EPA’s official monitoring. The map on the right shows much more detailed data, pulling in crowdsourced measurements, for PM2.5 — the main threat from wildfires.
AirNow, EPA and Fire & Smoke Map, EPA

So where should you start? If you’re interested in overall air quality, including ozone and PM2.5, the EPA recommends you use its AirNow website. But if you’re worried about the smoke from wildfires, look to the Fire and Smoke Map. The EPA’s mobile app, also called AirNow, has both.

A step-by-step guide to using the AQI

Let’s say you open the AirNow app and type in your zip code to check your community’s air pollution forecast. Maybe you live in California, which has been plagued by historic fires. If you live in an affected community — say, Northern California’s Weaverville — you’ll find a reading for PM2.5, or particulates smaller than 2.5 microns. You can click through for details for more guidance and information about what agency is supplying the data.

But there’s more. Say you want to see more detail on the wildfire smoke in the area. On the app, click the smoke symbol, and that brings you directly to the Fire and Smoke Map.

AQI numbers are color-coded from “good” to “hazardous”: The higher the number, the worse the pollution and the darker the colors. These ratings account for whichever pollutant (ozone or PM2.5) is highest at the time, and can help you figure out the kinds of activities that are safe to do outside.

The people who have to pay the closest attention to daily air pollution are sensitive groups: young children and teenagers, pregnant people, people with underlying conditions such as heart and lung disease or asthma, and the elderly.

The trickiest aspect of the color-coded system is knowing how to act in those middle yellow and orange ranges. It’s ultimately a judgment call that should factor in your overall health, based on any risk factors you may have and how you feel.

“If you’re really coming through a rough stretch with your lung disease, today is probably not the best day — even if it’s yellow — for you to be working outside,” Bernstein, the pediatrician, said as one example. “If someone has chronic obstructive pulmonary disease and their symptoms have been really well-controlled for a while, if it’s a yellow or even orange day, it might be: ‘Let’s go outside for a fixed amount of time.’”

What to do when the air quality is bad

On a bad air day, it’s important to take additional precautions besides just limiting your time outdoors. Here are some recommendations from the EPA and public health experts:

Not everyone has control over their outdoor activities, and some communities and outdoor workers face astronomically higher risk from pollution than others. White Americans contribute more to air pollution through their consumption of goods and services, yet Black and Hispanic Americans tend to live in neighborhoods with lower air quality — one reason for the pandemic’s disproportionate toll on these communities.

While more informed citizens and health care providers would go a long way in taking sensible precautions — in the same way we’d wear masks to reduce Covid-19 risk in public spaces — it isn’t enough on its own. The scope of people affected by air pollution is hard to fathom: A Harvard study published in Environmental Research Letters in February found that global air pollution from fossil fuels was responsible for one in five deaths worldwide in 2018. That’s about 8 million people, roughly the population of New York City.

These numbers suggest the problem of air pollution is bigger than any individual’s choices. The United States passed the Clean Air Act in 1963, and the air is cleaner today than it was in the 1970s, when the environmental movement to regulate pollution was in its infancy. Just as it took decades to appreciate the benefits then, the quality of air we’ll breathe for decades to come depends on what we do about it now.

The United States can cut pollution by cutting reliance on fossil fuels. This would expose fewer people to the other types of pollutants that come from burning and refining coal, oil, and gas. It would also help prevent runaway global warming, which is causing lengthier and more damaging wildfire seasons.

“My hopeful vision of the future is that we make this transition off of fossil fuels, and most folks are going to have very little exposure to air pollution for much of the year in the United States,” Bernstein told Vox. “That would be a much better future than all of us needing to have yet another thing to worry about on a daily basis — because we don’t have to. We actually have a choice.”