It plays with your mind.

Share All sharing options for: How Netflix’s The Haunting of Hill House uses color to underscore its horror

Spoiler alert: This post discusses the plot of The Haunting of Hill House.

Much has been made of the breakout season of Netflix’s The Haunting of Hill House, and for good reason. Mike Flanagan’s adaptation of Shirley Jackson’s classic gothic horror novel is scary, compelling, and one of the best things Netflix has added to its extensive original catalog in recent memory. Flanagan’s ravenous haunted house is full of terrors like the broken-necked lady, the demonic flapper, and the seductive room — all of them adding to the show’s shiver-inducing atmosphere.

But there’s something else bringing Hill House to life that, while less pronounced, is just as effective as these ghoulish nightmares: the show’s use of color.

Hill House’s narrative structure interweaves the past and present. The show centers on the Crain siblings — Steven, Shirley, Theo, Luke, and Nell — their parents, Olivia and Hugh, and their experiences of moving into a haunted house when the siblings were all children. It splices together those glimpses of the past with an examination of what the family is up to now as adults, traumatized by childhoods spent living in that house.

Color is a key tool in differentiating between those two sides of the story: the flashbacks and present-day look like two different shows. Glimpses of the past appear in warmer hues, but when we see the Crain kids grown up in the present day, everything is washed out and cold. 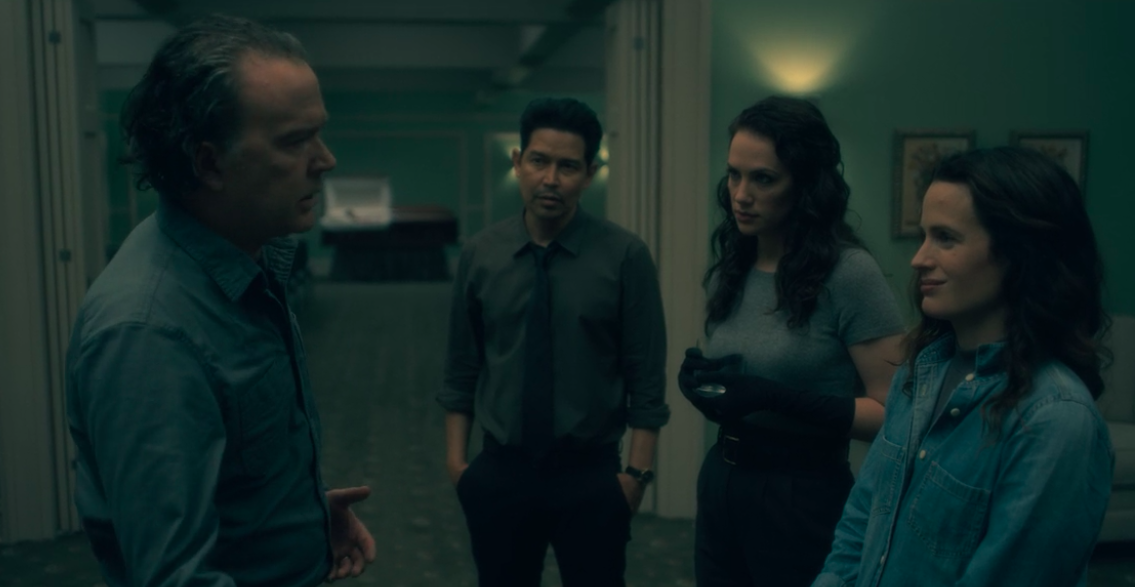 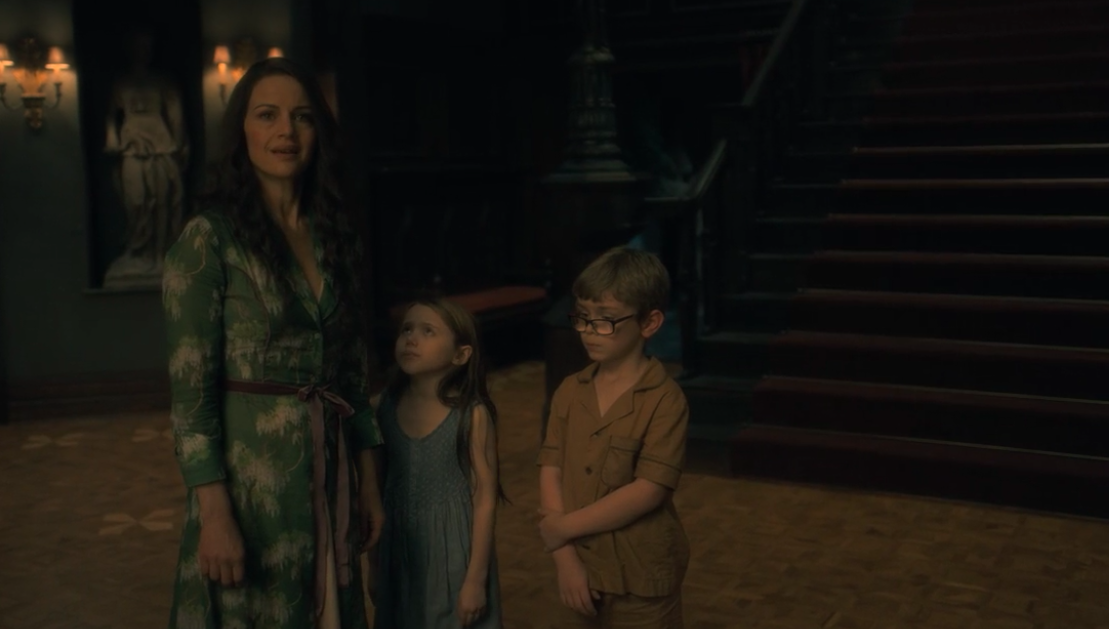 The use of color amplifies the psychology of the show, wherein unhappy adult siblings are dealing with demons that stem directly from their past as happy kids. And thematically, you can plumb even more meaning from the gulf in color between the two worlds.

Take, for example, this shot of a pallid-looking Steven Crain and his father at a funeral home:

The washed-out color amplifies the sense of sadness and exhaustion. It feels like all the life has been drained from the people in this shot, who seem to almost melt into the watery, despondent atmosphere.

Contrast that with childhood Luke in this shot of him hiding in a closet in Hill House:

Even though it’s just as dark as the previous shot, with Luke lit only by the flashlight, there’s more life here. Luke’s skin is peach-kissed and glowing. The brown of his shoes is distinct from the brownish-black of the wall behind him. The shot feels warmer and more alive, despite being set in an ostensibly scarier atmosphere.

This next shot from the show’s past is similar: The Crain kids are lit warmly, the pinks and greens on their clothes distinct. The room around them bursts with pattern and texture (the chair, the rug, the curtains, even the cardboard box), which makes the human figures even more distinct — they don’t just blend into the background:

Now let’s compare that glimpse of the past to this shot of the cold future, of Shirley and Theo at Shirley’s mortician station:

The coolness of this scene adds to the emotional depth. The bruise-like hues of blue, green, and yellow evoke death and despair, which is further amplified by the washed-out atmosphere and low contrast. You can almost feel how clinical and chilly Shirley’s work is.

Looking at the difference between these shots, it’s clear that the house, as scary as it can be, always seems warmer and more inviting than wherever the Crain siblings are in the present day — and that makes everything even more sinister.

The twist, for those who have watched until the end, is that this color psychology is all tied up in what haunts Hill House. The house is meant to be seductive, tantalizing, and inescapable — it wants to keep its inhabitants there. Hence, it presents itself as warm, inviting, and beautiful. And this seduction creeps malevolently out from the past and into the present, as in this scene with Nell:

This is one of the rare times that an adult Crain sibling is given a warm shot. Everything looks so beautiful, sumptuous, and splendid. Of course, the audience knows this is all a hallucination and that Nell is actually dancing away to her doom.

The illusion is all part of the house’s seduction: The longer you stay there, the more chance you have of losing your mind, dying, and being stuck in that house for eternity. It also gives context to Olivia’s desire to kill her children in order to “wake” them from their painful lives. She thinks that if she “wakes” them, they’ll return to these warmly lit, inviting lives free from grief and pain — but we know that’s not the case. Even if we see it with our own eyes.