The series smartly uses nostalgia as a powerful storytelling tool, but it has the same blind spot as many of the '80s movies it references.

Share All sharing options for: Stranger Things’ treatment of Barb reveals the show's greatest flaw: its limited view of women

"We talked into the night. The kind of talk that seemed important until you discover girls." — Stand By Me

Stranger Things, Netflix’s newest binge-friendly offering, is technically an '80s science fiction small-town horror. But at heart it’s about coming of age amid '80s science fiction small-town horror; at times it can barely maneuver through its reference density. Poltergeist, the films of John Hughes, Stand By Me, E.T., Poltergeist — the gang’s all here.

It’s no secret that the series delights in being referential; the Duffer brothers pitched the show as "really dark Amblin" and assembled footage from 25 movies to sell their vision: 1983, a scrappy group of boys, a creepy mystery, and a small town full of secrets. It also has the same blind spot as many of these '80s touchstones: women.

Nostalgia is a powerful story engine, and Stranger Things is in a sweet spot, since those who grew up with the movies it references are now a prime demographic to appreciate them. The show could have coasted on pastiche, and it makes the most of the opportunity. But it has resonated with 30-something audiences as more than a supercut of influences, in part because of the way it approaches nostalgia.

Rather than using recognizable moments to evoke a particular emotion, Stranger Things channels nostalgia itself, as the Duffer brothers reflect on childhood. The references exist because, for so many people, coming of age meant processing life through those cultural touchstones.

Related Stranger Things doesn't just reference '80s movies. It captures how it feels to watch them.

That’s why the series’ best beats tend not to be direct callbacks — they’re part of a mundane world of remembered childhood that props up those outside references. The class difference between two of the tight-knit friends, Mike Wheeler and Will Byers, is never mentioned; it doesn’t have to be, since we’re reminded with every establishing shot of Will’s dilapidated ranch home or Mike’s tidy colonial. Will’s dad Lonnie is the intimate antagonism of divorce: tense one-sided telephone conversations, a life somehow sinister in its detachment.

This is true all the way up through the government, which is seen through the lens of a kid just learning to distrust adults: Agents are powerful and ruthless, but their motives are obscure (even the sinister Dr. Brenner seems unclear what he’s after). These grace notes ground the series’ more widely scattered elements; monsters are on the loose, and they’re scarier because they threaten to disrupt Mike’s family breakfasts.

But this perspective also occasionally traps the series’ female characters in that same childhood stasis. To wit: Will's disappearance is the overarching plot of the entire series, but when high schooler Barb goes missing, only her best friend Nancy even notices. There’s nothing particularly malicious about it, but a pattern emerges in the ways these plot points still subscribe to the boys’ perspective in ways other subplots don’t.

And for all of Stranger Things’ elements that work — small-town dynamics, the terror of a long pause, the sense of being young and alone and outnumbered — its approach to women shows the limitations of that fixed-perspective nostalgia in a series that’s aiming for more.

As the show concentrates on its central group of boys, it neglects to give its female characters nuance

Winona Ryder’s Joyce Byers is a fiercely protective mother, and her inner life is entirely pointed at her young son. Much of this is plot-specific: Will is missing, and the crisis of his absence is the center of the series. But the show keeps any outside dynamics to a minimum. Joyce's job conveniently gives her leave, her ex is on the outs, and even her older son Jonathan is out of her scope: "I don’t even barely know what’s going on with you." From an adult eye, despite the crisis, her characterization seems claustrophobic given a full television season.

It’s from the perspective of the young-man nostalgia engine that Joyce makes sense.

When you’re a kid, Mom exists only as pertains to you; the intricacies of her inner life are revealed with time. (Richard Linklater’s Boyhood explored this process at length.) In a movie, Joyce's single-minded characterization would make complete sense. But an eight-episode series provides enough room to shade the lives of Chief Hopper and Dr. Brenner; even the boys’ teacher gets a beat unconnected to the children.

Joyce’s only other emotional connection? Eleven, to whom she offers proxy motherhood in the midst of the big ramp-up. And even that doesn’t last; any concern she has for Eleven seemingly evaporates after Will is returned to her.

Teenage Nancy gets a little more depth; in the movies Stranger Things leans on, there’s more for the older sister archetype to do — navigate high school, fight monsters, have sex. One of her major arcs revolves around slut-shaming, which sounds risqué until you remember the sexuality of teenage girls isn’t as mysterious as we might expect. It’s a fixation of pop culture, even the kind aimed at kids, and kids catch on early to double standards about dating and sex — certainly Mike is well enough versed in innuendo that he knows exactly how to get Nancy’s goat about Steve.

More telling is how Nancy’s personal worth is framed outside romance; it’s measured almost entirely by how nice she is to her little brother’s friends, or to Jonathan, the older mirror of these young outsiders. Even the death of Nancy’s friend Barb is designed to bring Nancy into closer contact with Jonathan. (Nancy still gets to help the boys fight monsters; true to perspective, that conveniently redeems the time she wasn’t nice enough to Dustin when he went up to her bedroom.)

Barb’s demise is a pointed example of the pitfalls of this pattern of indulging nostalgia. Barb – studious, uninterested in Steve's crowd, more common sense than Nancy but still loyal – was positioned halfway between a Final Girl in an '80s horror movie and the overlooked best friend in a John Hughes movie who will eventually have her day.

In a purely nostalgic framework, that gives her character direction. In a purely series-oriented framework, her disappearance on top of Will's disappearance should rock this small town to the core and have repercussions throughout the season. Instead, she's merely collateral damage; hardly anyone in town besides Nancy registers that her disappearance is sinister — or even worth investigating.

The situation gets awkward when you imagine that one of the reasons Barb perished so early is that Stranger Things' childhood lens simply couldn’t imagine what happened to a girl boys didn’t think was cute.

A HitFix interview with the Duffer brothers doesn’t do much to shake that impression. Matt Duffer equivocated: "I’m surprised and also not surprised at the outpouring of love for Barb, because that was something everyone felt on set. The fact that people aren’t really following up on her disappearance to the same degree they are with Will makes her that much more of a tragic character."

And then there’s Eleven. Played with electric force by Millie Bobby Brown, Eleven is the hothouse character dropped among the Indiana mundanes: damaged, powerful, and alone.

Eleven definitely has the biggest arc of any woman on the show. It helps that she’s central to the boys’ plot; within that, we see her face her past, learn about the world, and develop her powers. But she is deliberately set up as an analog of an alien life form, and that’s pretty much the neatest metaphor possible — both for how this series frames its female characters and why those female characters become a particular sticking point in perspectives. 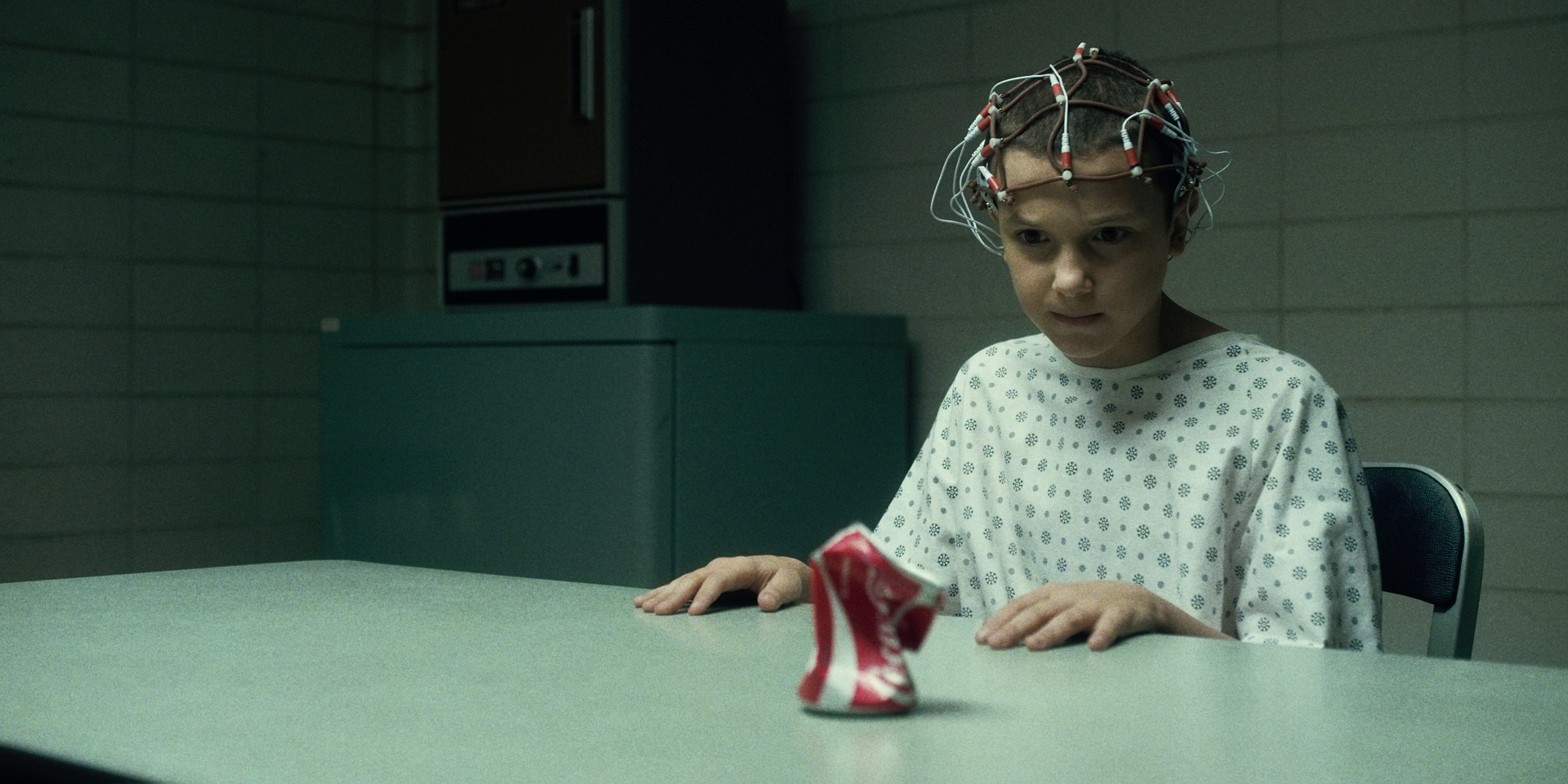 This approach gets strained by the demands of a season of television in ways it wouldn’t in a movie. A two-hour film doesn’t have to move beyond its central perspective.

Stranger Things has a small-town ensemble and multiple plots that must come together over the course of a season, and the shift from boyhood nostalgia vision to adult narratives doesn’t always land. The adult perspective knows that Dr. Brenner’s flashback solicitude to Eleven is creepy on a level beyond scientific coldness. That makes it tricky to then size the show’s perspective back down to Mike and company ushering Eleven through the world.

Mike as a master of makeup application is supposed to be a nod to E.T., but it’s really John Hughes; in dressing up Eleven, Mike has polished his own dream girl. (Tellingly, it’s one of the things Eleven internalizes deeply; after losing her wig, she checks in with Mike: "Still pretty?") Mike's intentions are earnest, and it's clear he genuinely cares for Eleven — theirs is the series' central love story. Still, it's unsettling to see Eleven caught between being Brenner’s good little girl and Mike’s first crush.

That sense of being caught between men is worth noting across the board; the story is ostensibly about a small town, but the female residents don’t share much screen time with one another. Nancy briefly has Barb and, equally briefly, her mother (who’s the most direct John Hughes hat tip character), and Joyce gets a touching scene with Eleven. But otherwise these central women are surrounded by men and boys.

It’s not an unusual sight on TV, unfortunately, but for a show that built its first season around everyone in town incrementally joining forces to defeat the many faces of evil, it’s striking how rarely women’s lives touch.

It will be interesting to see how the Duffer brothers’ perspective matures in season two, alongside the boys and their cultural references. Joyce has Will back and might build up a more complex inner life in the wake of her crisis. Nancy, filling both the teen romance and the teen horror squares on the Stranger Things Bingo card, is (hopefully) past slut-shaming and headed for better things, especially now that she’s proven her loyalty to the boys. And Eleven — well, we’ll start with getting her back and go from there.

Ultimately, there’s a warmth to Stranger Things that suggests its missteps are just casualties of enthusiasm for the source material. It wouldn’t be hard for these characters to gain a little nuance; let’s hope the show grows up a little where it needs to, and comes out the other side.

Watch: How a TV show gets made