The world’s frogs are disappearing. These photos show the most amazing ones left.

Photographer Robin Moore stalks "lost" frogs in some of the most remote forests in the world.

Share All sharing options for: The world’s frogs are disappearing. These photos show the most amazing ones left.

If you've ever admired the dogged passion of bird watchers — their willingness to rise before dawn, memorize subtleties in feather color and song, and stand in silence peering through binoculars for long periods of time while being bitten by mosquitoes — then you're bound to be impressed by frog watchers.

According to Robin Moore, a leading amphibian advocate and photographer, frog watchers may be even more hardcore than bird watchers.

"Frog lovers have to endure a lot. They have to go out at night with headlamps, in rugged conditions," he tells me. "If you're going to see these cryptic, elusive species, you need a lot of patience and perseverance."

We're not talking about the American bullfrog, which you might have spotted (or heard) paddling around any given North American pond at dusk. We're talking about the rarest and most at-risk frogs and toads that hide deep inside some of the most remote forests in the world.

Moore became enamored of amphibians as a lad; one of his hobbies was collecting newts on the west coast of Scotland. He got a PhD in biodiversity conservation at Kent University and eventually landed a job at Conservation International just after a major global assessment showed that amphibians were the most threatened group of vertebrates.

He's thrown himself into saving frogs, toads, salamanders, and their brethren from the talons of extinction through conservation projects and photography. In 2014 he published In Search of Lost Frogs, a book of stories and images of his travels around the world. (I first spotted these incredible images in the California Academy of Sciences' online magazine, bioGraphic.)

Moore has found frogs on the largest uninhabited island in the South Pacific (part of the Solomon Islands), in the Bale Mountains of southern Ethiopia, and in the Chocó rainforests of Colombia, where, he says, "armed conflict has effectively preserved vast swaths of forest harboring lost and undescribed species."

These days Moore is the communications director of the Global Wildlife Conservation and a senior fellow of the International League of Conservation Photographers. And he continues to stalk frogs with his camera. He recently returned from a trip to Indonesia, where he pursued the rediscovered Borneo rainbow toad (his photo of it appears below).

I caught up with him in Washington, DC, to hear about his latest adventure and the plight of frogs and toads on the brink of extinction. Our conversation has been edited for brevity and clarity. 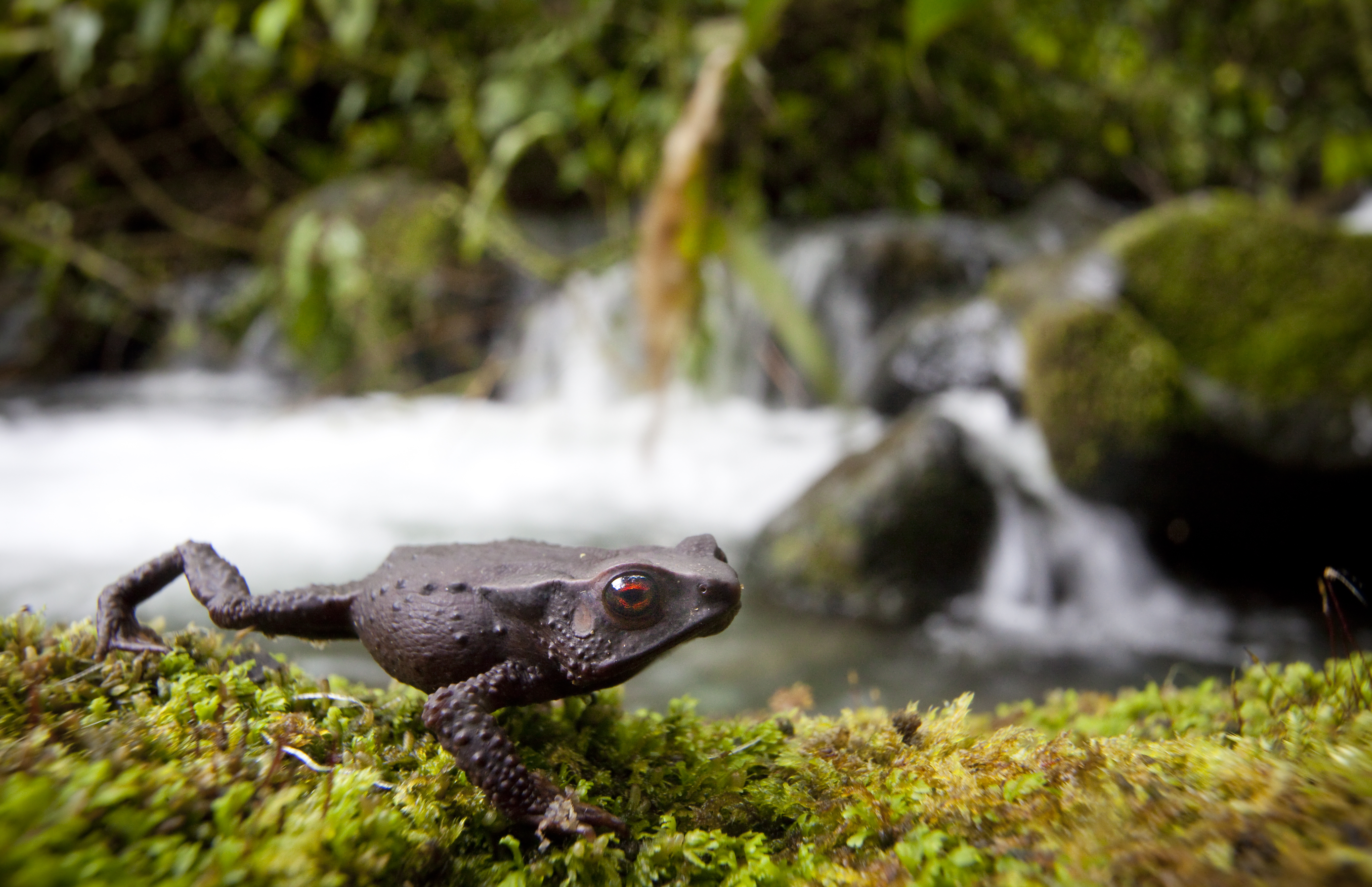 The ruby-eyed toad was discovered for the very first time by Moore and other conservationists on a "lost frog" mission in Colombia in 2010.

How did the Search for "Lost" Frogs campaign get started?

I joined CI [Conservation International] to scale up the response to the huge threat to amphibians. But it's hard to engage people in amphibian conservation; they're not cute or fluffy with long eyelashes. It's hard to compete with pandas and polar bears.

I became interested in how to elevate the profile of amphibians, and I came up with this idea of a most-wanted list of lost species.

In the 1980s into the 2000s, a lot of amphibians suddenly disappeared almost overnight. But in 2003, one species reappeared: the harlequin toad in Costa Rica. It was followed by another couple of species people presumed were extinct.

So all these species presumed extinct -- what can they tell us? Some have survived, why? There may be a clue there that could help us protect other species.

That was the scientific rationale -- that we could try to raise the profile of frogs, and get people engaged in adventure and discovery.

We pulled together the Top 10 Most Wanted Amphibians list in 2010 with the International Union for Conservation of Nature [IUCN]. I chose the species on the list rather subjectively — they were the most iconic poster children.

Pretty quickly we secured support to send 33 teams in 21 countries over course of six months to look for the species. And it actually resulted in a number of rediscoveries, including the Borneo rainbow toad in 2011.

That was backbone of Search for "Lost" Frogs.

Tell me about your trip to Borneo this month. Why did you go, and what did you find there?

Borneo has an annual photographic frog race [where participants race up a forest trail to take pictures of as many amphibians as possible]. And I was invited as a speaker. I said, "If I’m going to come to Borneo, we have to try to see the rainbow toad."

I was told I had a 50/50 chance. It's a very unusual toad that lives up in trees and is a couple of inches long. The way to find it is at night; you have to walk up this pretty steep forest trail and then, just using your headlamp, scour the trees. I was with a young student named Pui who had rediscovered the toad in 2011; he was the first person to have seen it after 87 years.

I have been on many expeditions where we didn't find the frog we were looking for, because they can be very elusive. They could be hiding for any reason.

But we found two individuals. When Pui called out, it was a shot of adrenaline and a huge relief — I had come all this way and I would get the shot I came for. The whole experience, for me, it's like being a kid again. What’s so great about the expeditions is tapping into a sense of exploration and discovery.

How do you take pictures of frogs at night?

It's a real pain in the butt. They have shiny skin, so you need a good flash that’s not going to bounce off it. I use an off-camera flash with a big soft box and a wireless remote trigger. I'm literally balancing it, holding it above the frog.

It’s a pain in the butt, walking through the rainforest with a massive soft box and flash and camera. But being able to have complete control over the light is important. I wave the flash over and in front of the frog to get that light right. I like having the one source of soft light to give dimensionality to the frog. And a macro lens to get nice and close to the frog.

What else has come out of the "Lost" Frog project?

One of the very powerful things is that some frogs can become real flagships of conservation. They can instill a real sense of pride locally. That’s what I saw in Israel, where the Hula painted frog became a symbol of hope and resilience. The ecosystem was regenerated and the [Hula Valley wetlands] were re-flooded, and the frog reappeared after 50 years.

A taxi driver there told me the story of the frog that had come back from the dead. These stories can be very powerful and can inspire conservation. Another example: The region of Borneo where the rainbow toad was rediscovered is now famous because of this toad.

Some frogs are truly lost, though, right?

Yes, we have a list of over 200 lost amphibians, and I think a lot of them really are lost. Some, like the golden toad of Costa Rica — where some people hold out glimmers of hope — have not been seen since 1989. Every year search teams still go out looking for it.

The gastric brooding frogs of Australia are probably not there anymore either.

We have these stories of rediscovery, but the bigger picture is amphibians are in trouble, and do need help. And protecting the ones that are left is vitally important. In Panama, there are species being held in tanks because we don't know if we can put them back in the wild.

One of the biggest threats is [chytrid] fungal disease that has swept through. What some of the rediscoveries are showing us is that there are individuals and populations that have survived the wave of fungus that’s killed everything around them.

Now there’s cutting-edge research to figure out why. Is it the microbial community? Is it the habitat? That research is really going to inform how we protect and bring back frogs that have been lost.