Share All sharing options for: How conservative megadonors built a shadow GOP that weakened the official party

If it feels like outside groups have an enormous amount of influence on Republican groups, that's because they do. Or they at least have a huge share of the money, according to new research from Theda Skocpol, an influential Harvard University political scientist.

The Republican Party's official organs have seen the amount of money at their disposal decline by hundreds of millions of dollars. Meanwhile, outside conservative advocacy groups — mostly controlled by a small network of extremely wealthy donors — have built sprawling national political institutions with large enough staffs and financial clout to rival a weakening GOP infrastructure.

Below, for instance, you can see the rapid growth of one of these groups: Americans for Prosperity, funded by the wealthy libertarian industrialists David and Charles Koch. (The graphic below was created by Vox's Javier Zarracina.)

The effect of this shifting locus of key resources has been to yank Republican politicians toward positions held by outside groups like AFP, Skocpol says.

"AFP leverages Republican candidates and officeholders and pulls them to the far right on political and economic issues," Skocpol says. "The Koch network exerts a strong gravitational pull on many Republican candidates and officeholders, resetting the range of economic issues and policy alternatives to which they are responsive."

Republican officials moved to the far right on economic policy

Particularly since the mid-2000s, Republican politicians have moved almost uniformly toward a set of far-right positions on tax policy and cutting government spending, according to Skocpol.

The presidential candidates' tax plans are a good shorthand illustration of this. In 2000, George W. Bush proposed a tax cut that would have amounted to $1.8 trillion in today's dollars. But by this election cycle, Ted Cruz and Donald Trump want tax cuts amounting to $8.6 trillion and $9.5 trillion respectively, according to the Tax Policy Center.

There's good evidence that these positions are to the right of even the Republican electorate. A 2015 Pew poll, for instance, found that about half of Republicans think the wealthy don't pay "their fair share" in taxes — even as their party moves to dramatically slash tax rates on top earners.

Understanding this disconnect has become one of the key puzzles for political scientists. Much of the previous research on this question has looked at the decisions of individual leaders, like leaders in Congress, or at voter polling data.

Skocpol worked with Vanessa Williamson of the Brookings Institution, Harvard Ph.D. candidate Alexander Hertel-Fernandez, and several Harvard students to take a different approach and see which institutions in the conservative orbit were gaining power and which were losing it.

They followed the money. The researchers added up the budgets of all the major organizations in the conservative political universe — including think tanks, lobbyists, and fundraising groups — and looked to see if there had been any big changes over the same time.

The Republican Party itself has gradually lost control of important resources

The researchers' first major finding was that the Republican Party has lost much of its levers of power.

In 2001, the Republican Party's various committees — at the federal, state, and local levels — had a combined budget that commanded about 50 percent of the financial resources on the right, according to Skocpol's research.

Now, by contrast, party committees control closer to 30 percent of the money in the right-wing universe. And it's not just that other groups in the conservative orbit have gotten bigger: In the aggregate, funding for Republican Party committees has fallen by more than $200 million since 2001.

"We see sharp shifts in the organizational channels through which political resources flow, with the share of resources directly controlled by the GOP party committees dropping sharply," the researchers write. "Our data reveal that the Republican Party itself has recently lost considerable ground."

These numbers furnish evidence for the widely made claim that the structure of the GOP has grown weak. And they show the opening that's been created for outside groups seeking to steer the agenda in a different direction.

"When we talk about a GOP establishment, there isn't much of one left," Skocpol says in an interview.

As the GOP faded, outside groups gained cash, resources, and influence

While the Republican committees were losing cash, outside fundraisers like the Koch brothers were finding new ways to raise it.

Beginning in 2003, the Koch brothers began holding gatherings at exclusive resorts for a few hundred millionaires and billionaires. It now takes at least $100,000 in annual dues to attend these meetings, which are called "Koch seminars."

These seminars have provided a huge sum of cash for the Koch brothers, according to Skocpol. Since they began, there's been a 446 percent increase in the budgets of what the researchers call "extra-party funders" in the conservative orbit — more than 80 percent of which can be directly tied to the Koch brothers' network. 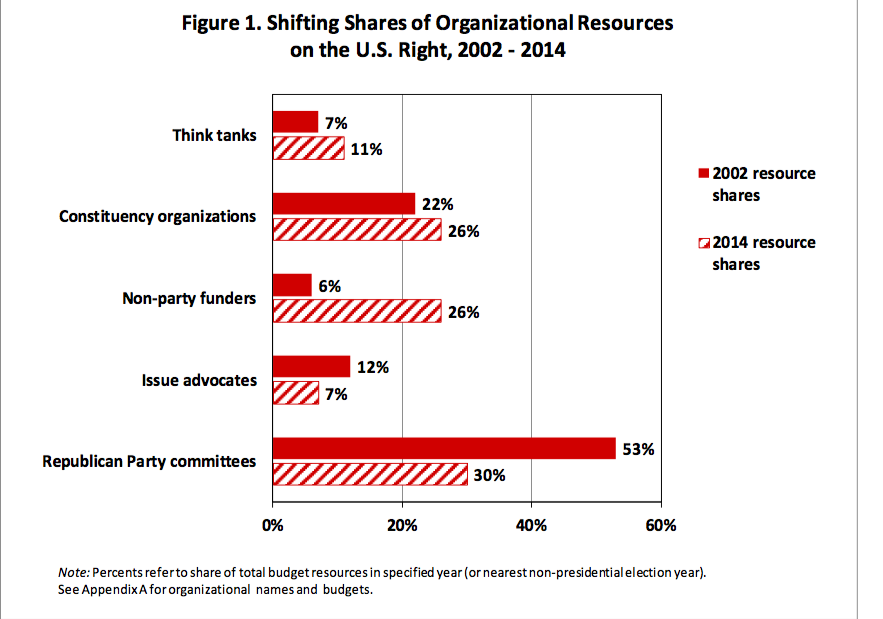 In total, funding for these outside groups has exploded by more than $400 million over the past decade.

What do these "non-party funders" do with this new cash?

For politicians, this shift in party funding and infrastructure changes a lot.

Groups like Americans for Prosperity buy television ads and have access to millions of activists, donor records, field staff operations, and campaign staffers that Republican officials want for their reelection bids.

They also hire extensively from former GOP ranks. About two-thirds of AFP's state directors had served in Republican politicians' administrations or campaigns, and close to a third of former AFP directors soon took significant positions in GOP campaigns or on Republican staffs, according to Skocpol's research.

"All of these make Koch organizations and the ever-expanding Koch voter repository very attractive resources for Republicans," the researchers say.

The cumulative effect is that whereas elected officials once relied on GOP committees for funding, the financial center of gravity has now shifted to outside party funders like Americans for Prosperity.

"The Koch network possesses greater clout and a much stronger ideological backbone than most of the groups that ruled the GOP-conservative roost as recently as 2000," Skocpol writes in one of the papers. "The contemporary Koch operation has put in place a parallel federation that can discipline and leverage Republican politicians across multiple levels of government."

But what does all this money really mean?

It's one thing to say that mega-wealthy donors are spending far more money on elections than they did before. It's another altogether to say that those efforts have actually succeeded in influencing Republican Party policy.

Of course, it's impossible to prove that the rise of the Kochs caused the Republican Party's rightward shift on economic issues. But Skocpol believes the evidence overwhelmingly suggests that it's been a major contributing factor.

In one analysis, for instance, the researchers found states with AFP branches were about 30 percent more likely to curb public sector union rights — even controlling for outside factors, like the strength of that state's union and its ideological composition.

"The Koch network ... has become thoroughly intertwined with the Republican Party and functions to pull GOP candidates and officeholders into alignment with Koch policy preferences," Skocpol says.

And that effort, she says, has created a divide between the Republican politicians and their voters.

"Republicans have moved so far to the right," she says, that "it's created an opening you could drive a truck through."

How much do conservatives hate Trump?