These maps show how Americans are dying younger. It’s not just the opioid epidemic.

Share All sharing options for: These maps show how Americans are dying younger. It’s not just the opioid epidemic.

For the second year in a row, the Centers for Disease Control and Prevention reported that Americans are dying earlier — and mortality rates have increased for a number of causes of death, including opioid overdoses.

But we’ve seen very little explanation on precisely where in the country this public health crisis is most acute.

Thankfully, the Institute for Health Metrics and Evaluation published studies in JAMA in December 2016 and May that map out mortality trends by county and cause. And they're very revealing. Understanding what mortality in America looks like today now means zooming in on what’s happening in different regions. Because what’s killing more people in the South, the Great Plains, Appalachia, and other regions is remarkably different.

First, the big picture: Across the country, there were massive disparities in overall mortality from 1980 to 2014. Counties in South Dakota and North Dakota — particularly those with native populations — had the lowest life expectancy, along with eastern Kentucky and southwestern West Virginia. Conversely, counties in central Colorado had the highest life expectancies. These geographic disparities in life expectancy, the Institute for Health Metrics and Evaluation researchers found, "are large and increasing."

In general, though, Americans live longer today than they did in 1980

In this map of mortality rates in the US, comparing 1980 and 2014, you can see that there is some good news: Fewer people are dying in the US today compared with 36 years ago. 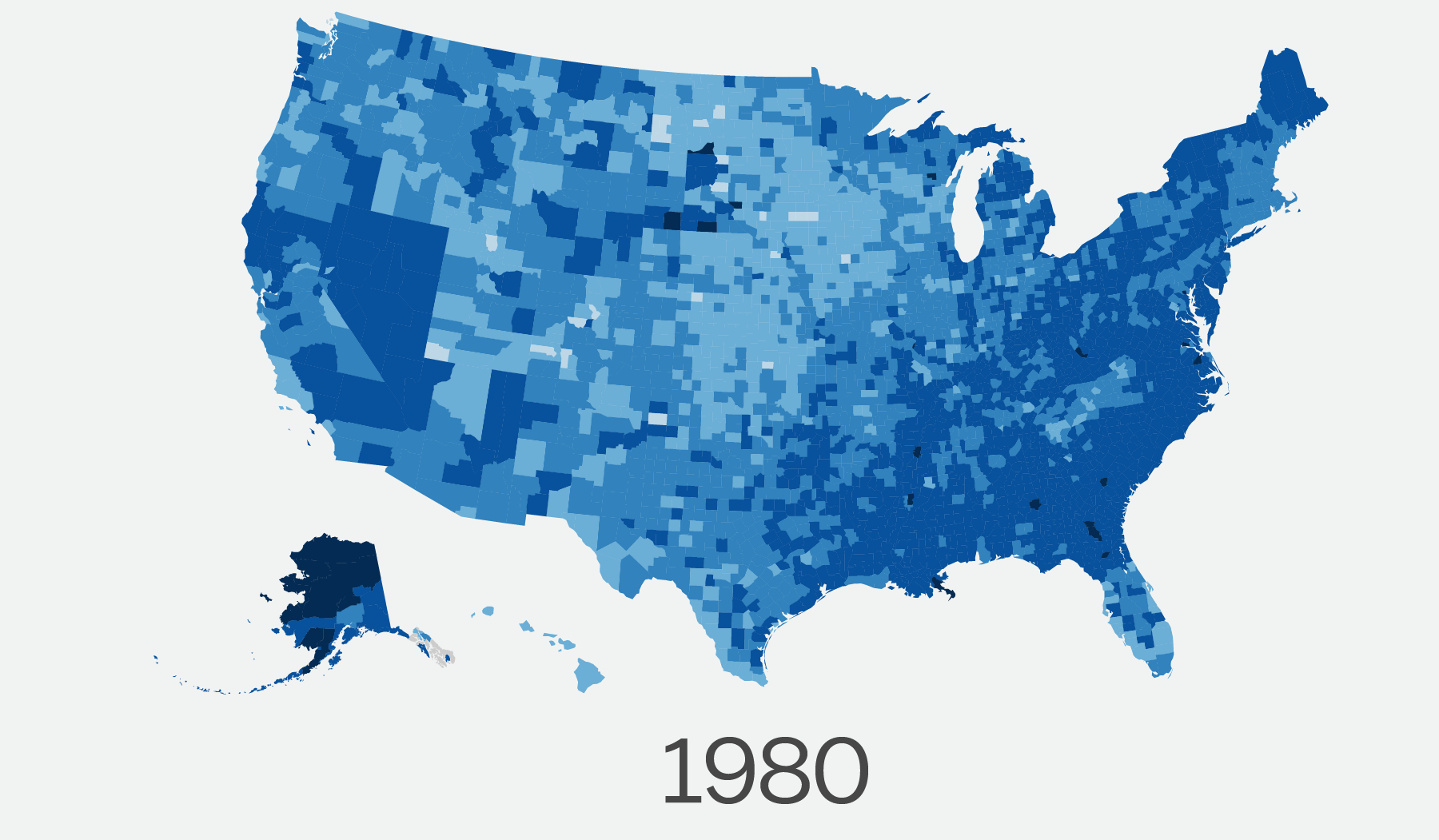 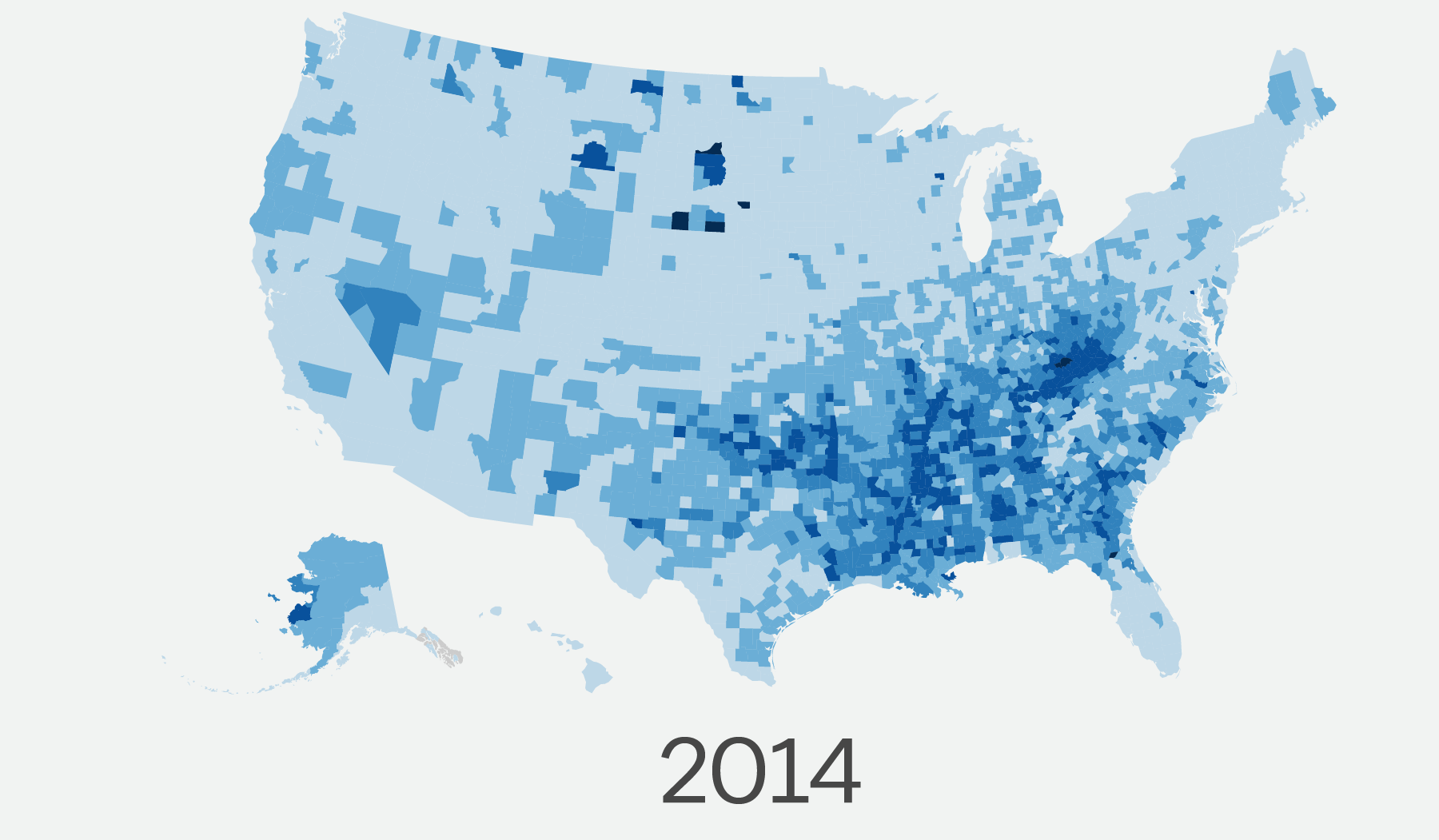 An IHME study published in May found that many pockets of the US do not actually enjoy a significantly lower mortality rate (as you saw in the first map). In fact, in some southern counties in states like Oklahoma and West Virginia, there was little, if any, improvement in life expectancy despite overall national progress.

"It's important to note that the population is falling in a lot of the places with rising mortality rates — people are leaving those places when they have the opportunity to," said University of Maryland health inequality researcher Philip Cohen. "That partly means that the less healthy people are left behind, so you see higher mortality rates in those places. But in addition to declining economic fortunes from economic shifts, it's also depressing and isolating to live in a place that people are trying to leave." Which helps explain why we see these health outcomes in these places.

Deaths from alcohol and drug use and mental health disorders have risen dramatically, particularly in Appalachia

Of the 3,007 counties in America, more than 2,000 saw increases of 200 percent or more in death rates related to alcohol use, drug use, and mental disorders since 1980. You can see this astonishing trend here: 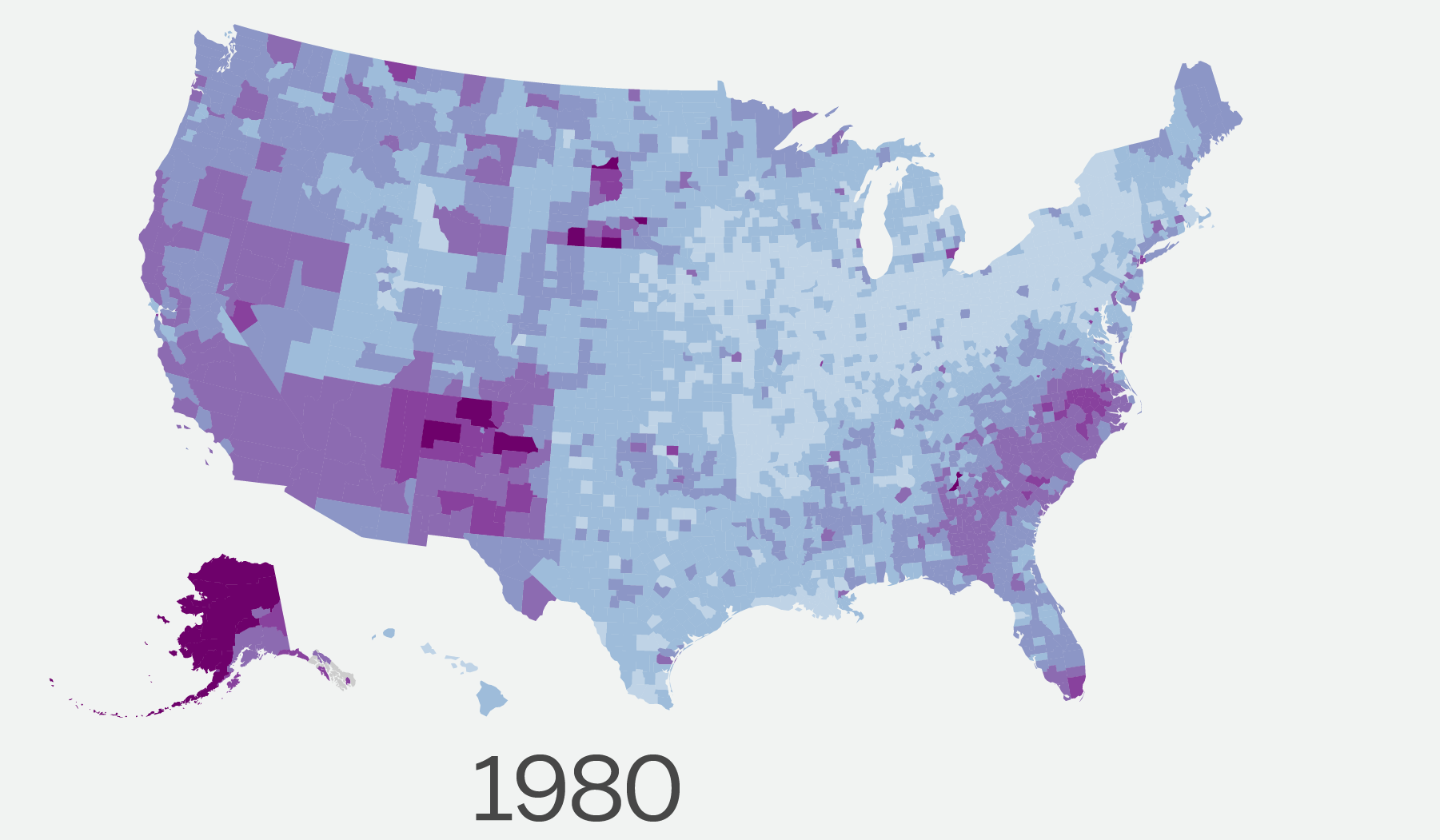 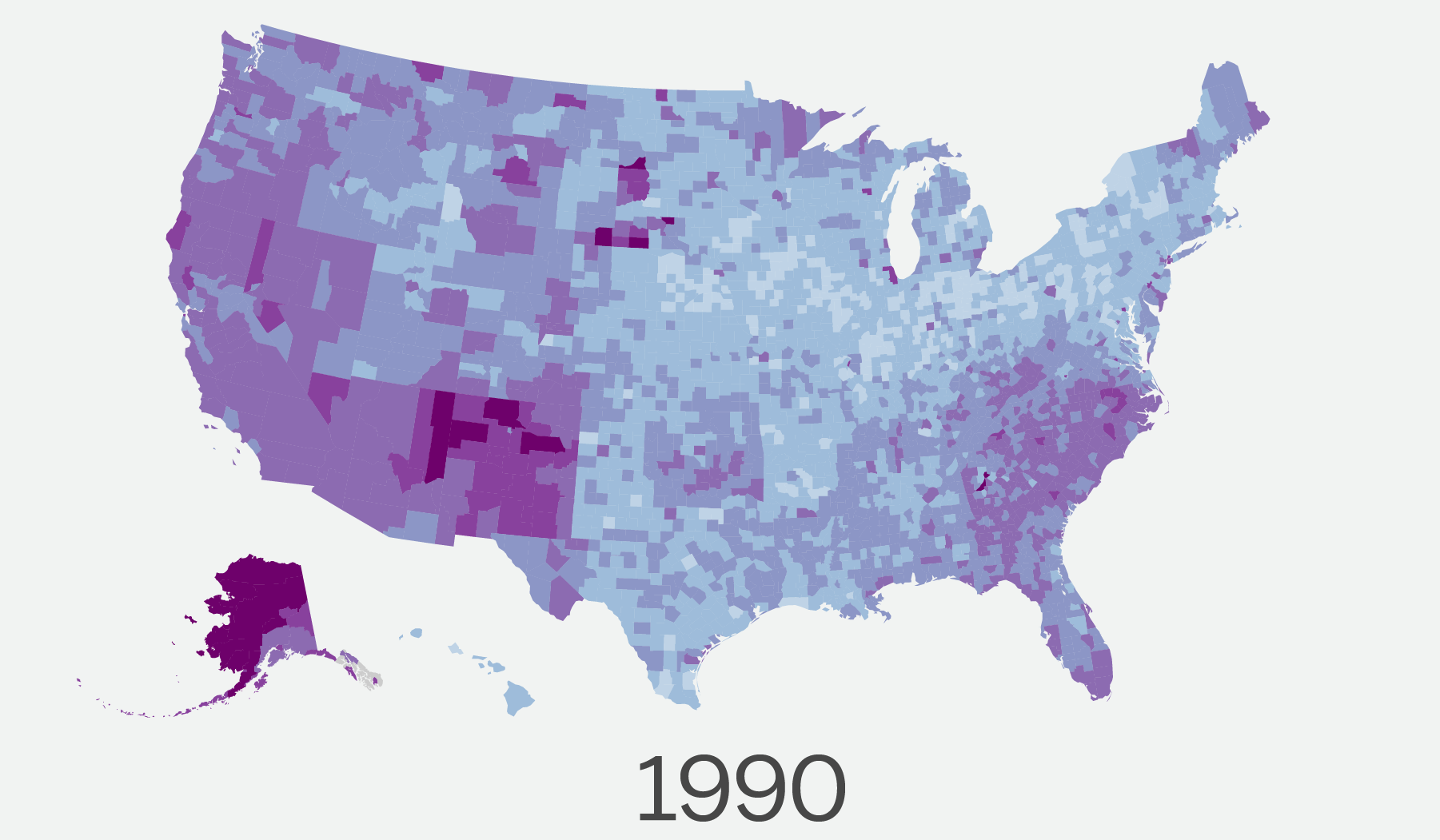 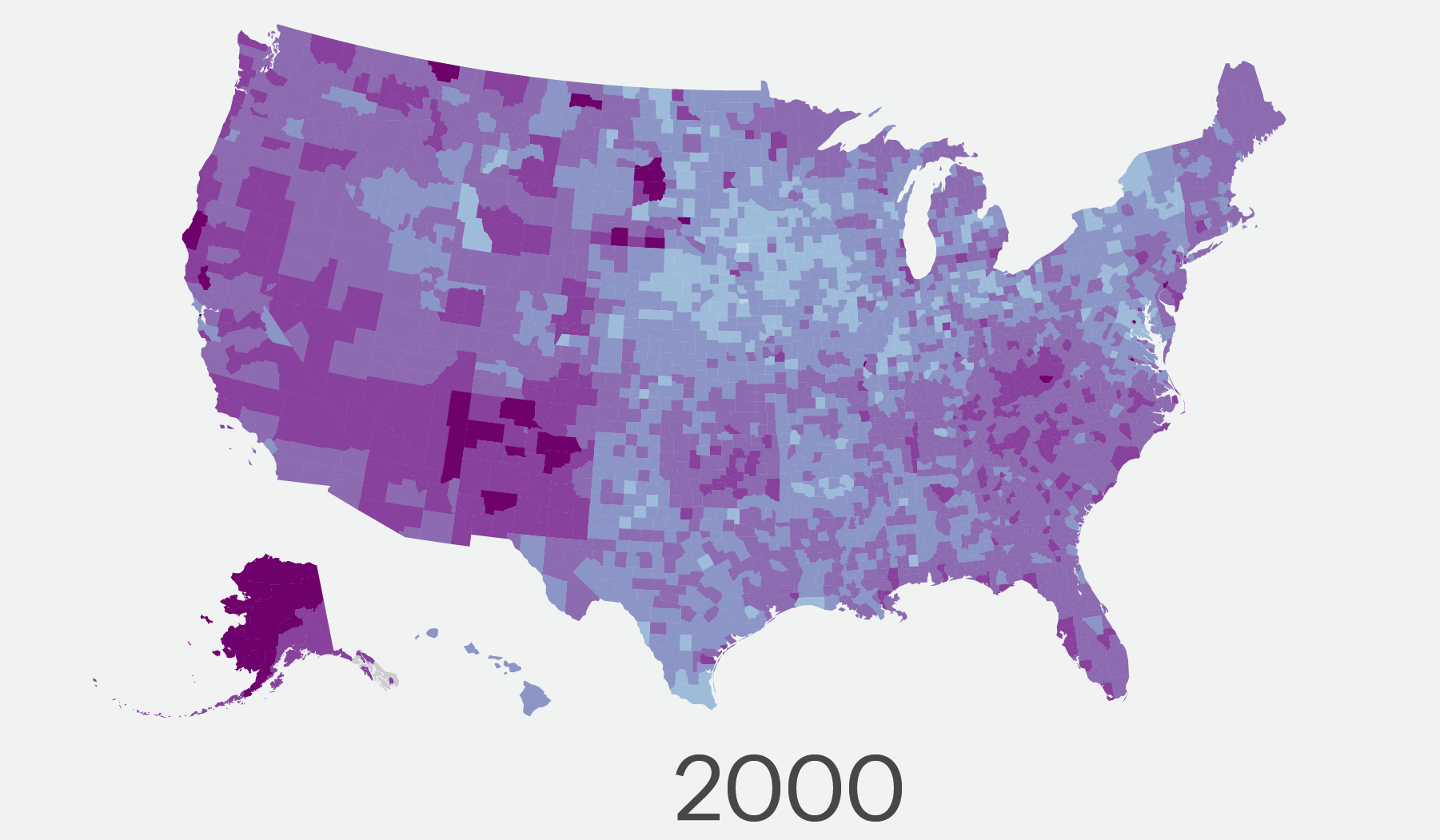 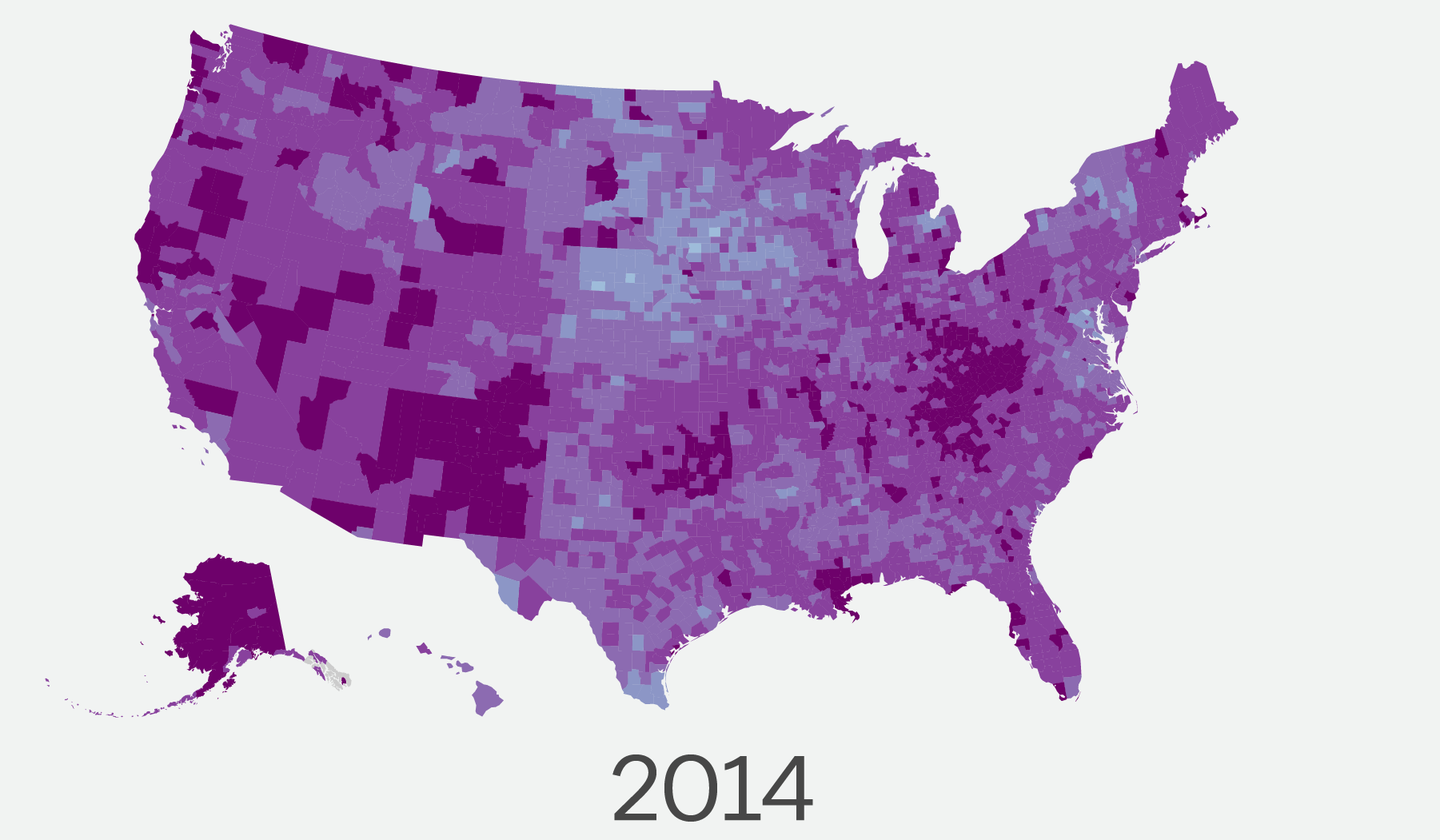 The problem has grown most acute in counties in Kentucky, West Virginia, Ohio, Indiana, Pennsylvania, and Missouri — where mortality rates have shot up by more than 1,000 percent between 1980 and 2014.

Researchers are still puzzling over why we’re seeing these increases, but many have pointed to economic despair and the opioid epidemic concentrated in these areas of the country.

There are huge disparities in cardiovascular disease deaths, with hot spots in the South

One of the most troubling trends was the massive disparities in heart disease deaths across America. From 1980 to 2014, all 50 states experienced a decline in deaths from cardiovascular disease. But this progress hasn’t been shared equally. States like Minnesota and Massachusetts lead the nation with some of the lowest reported rates of cardiovascular-related deaths (roughly 200 per 100,000), whereas states like Arkansas and Oklahoma still report more than 300 for every 100,000 deaths. Heart issues seem to be particularly clustered around the Mississippi River and reaching west to Oklahoma. 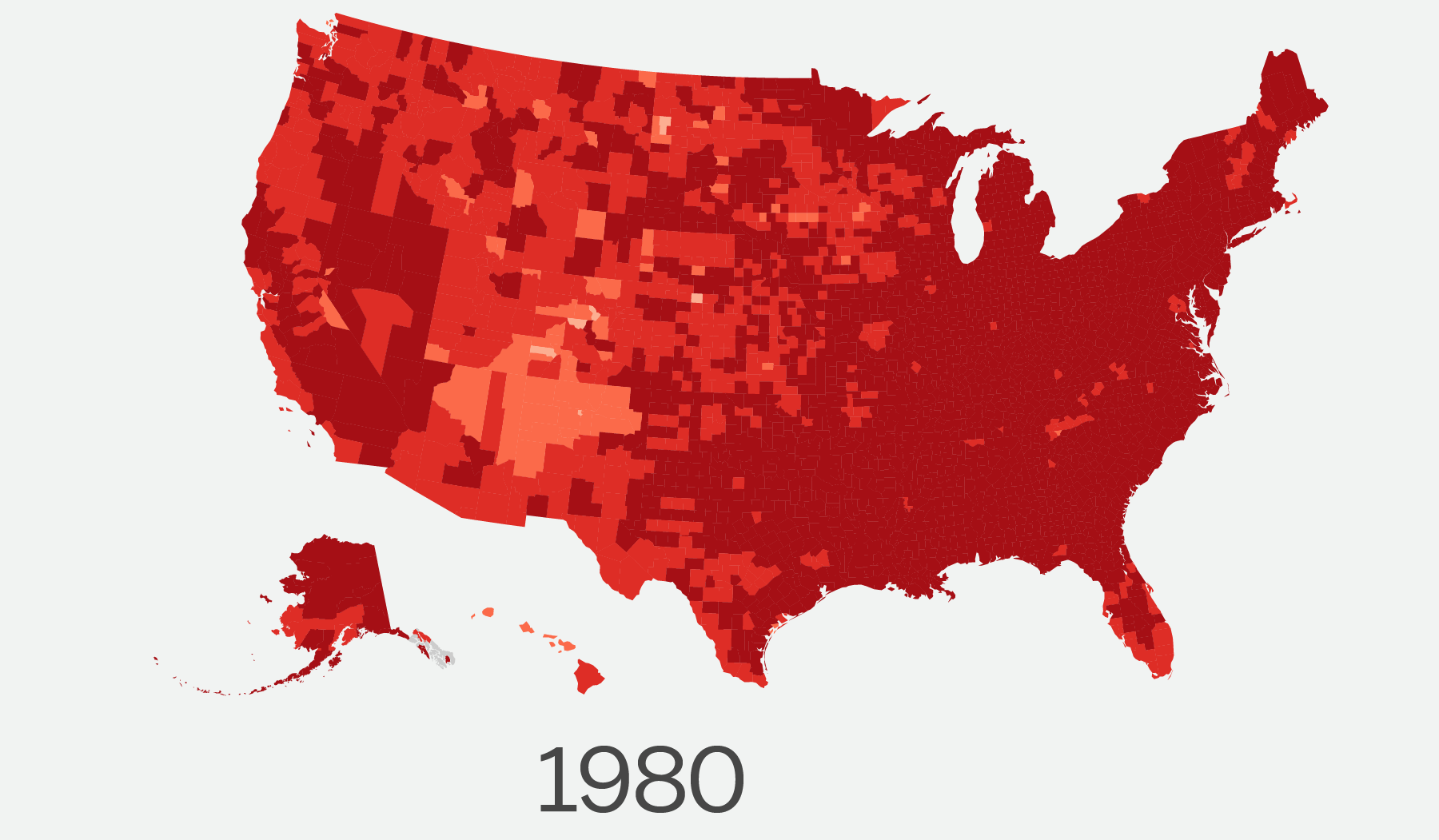 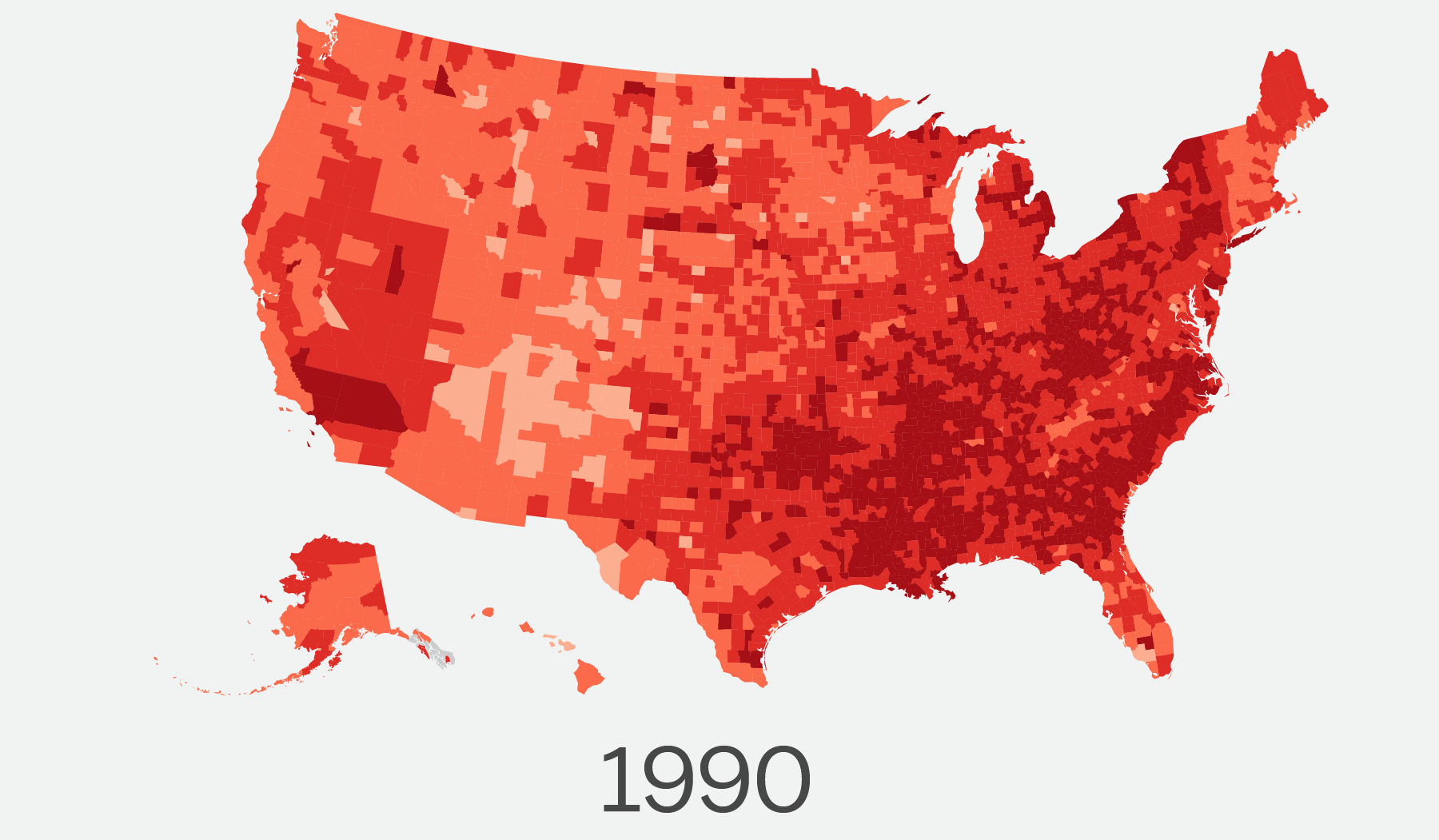 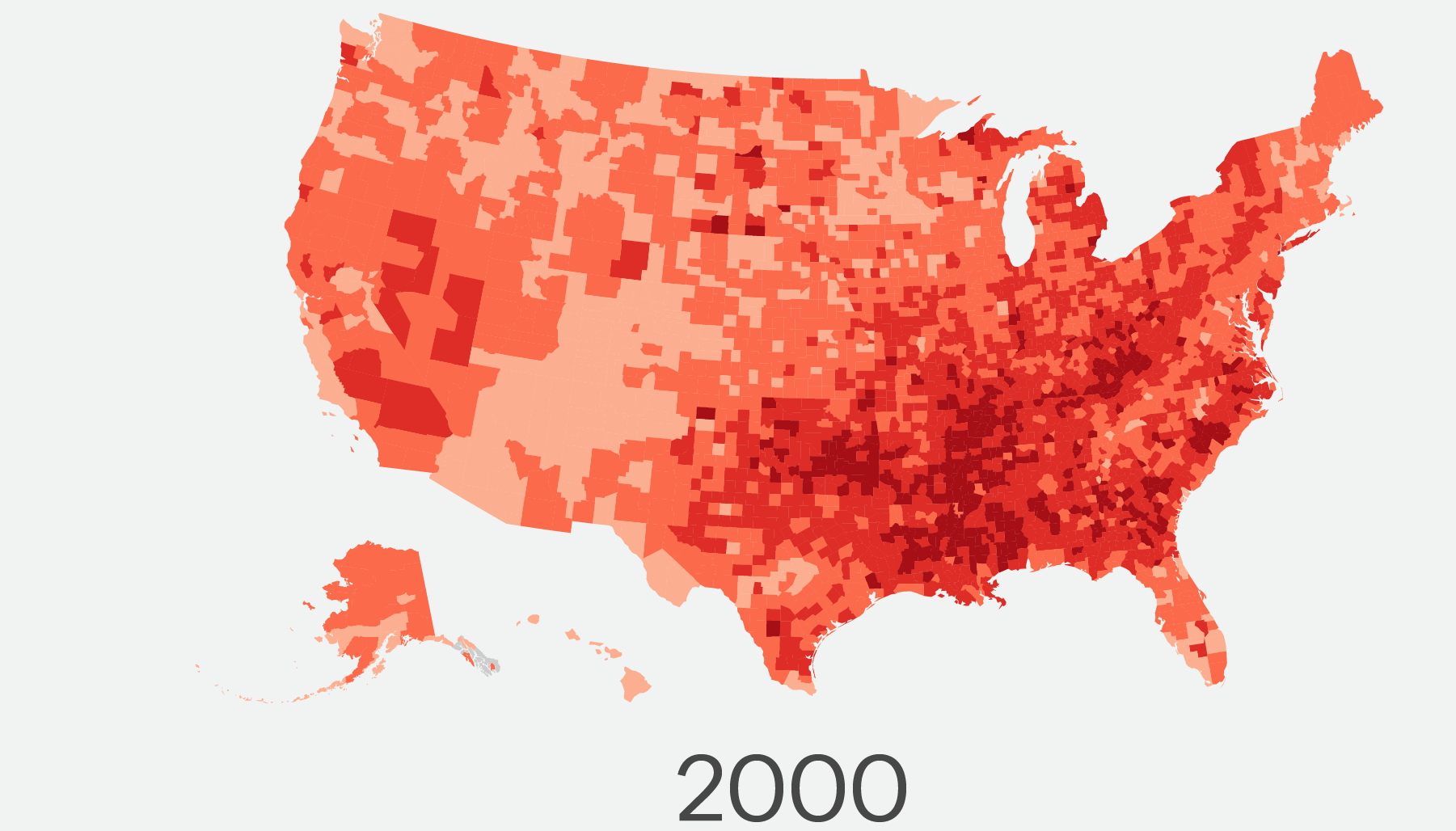 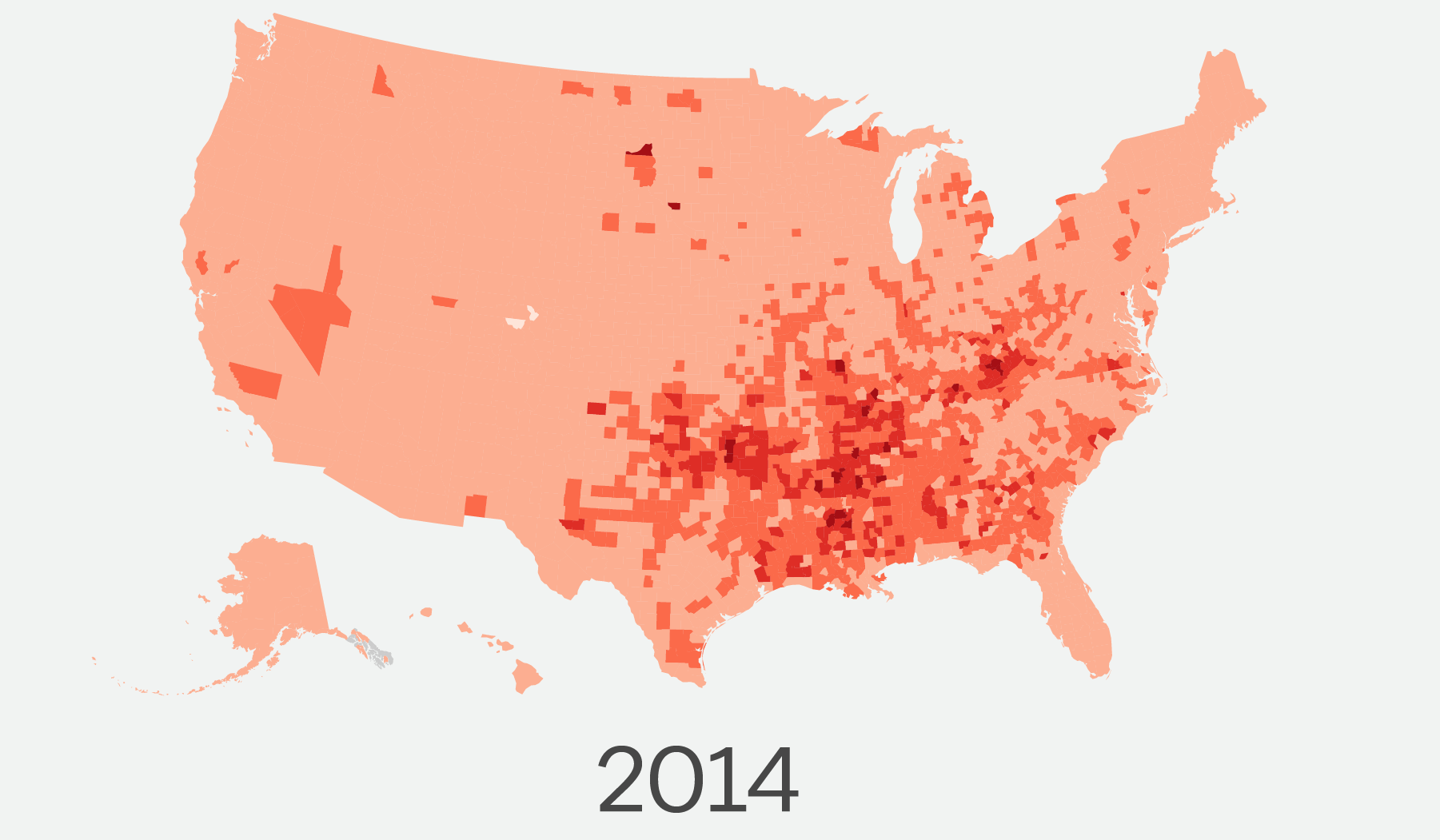 Overall, progress has been stalling on this measure too. After peaking in 1985, heart disease deaths fell dramatically — but there has been an uptick since 2010, as you can see in this study in JAMA. The trend has been linked to rising rates of obesity and diabetes in this country over the past several decades. (According to the CDC, nearly 40 percent of adults in the US are obese, while 15 percent were in the early 1970s. Between 1980 and 2014, the number of adults with diabetes in the US has nearly quadrupled.)

What complicates the overarching narrative of despair — that a lack of economic prospects is leading people to self-harm and substance abuse — is that it simply can’t apply to the whole country. Different geographic regions are experiencing extreme variations in despair-related outcomes like suicides, drug overdoses, and heart disease, said Abraham Flaxman of the University of Washington, one of the authors of the December JAMA paper.

"If you look at geographic patterns, you can say it’s despair that’s leading people to drink and do drugs," he said. "But then why wouldn’t that apply to leading people to overeat and become obese and diabetic? These trends are happening in different places."

To be more specific, today’s cardiovascular disease problems (which are linked to nutrition and obesity) largely plague the South, while the substance abuse and mental health issues are more concentrated in Appalachia, and the rise in self-harm and interpersonal violence is happening in the southwestern part of the country. 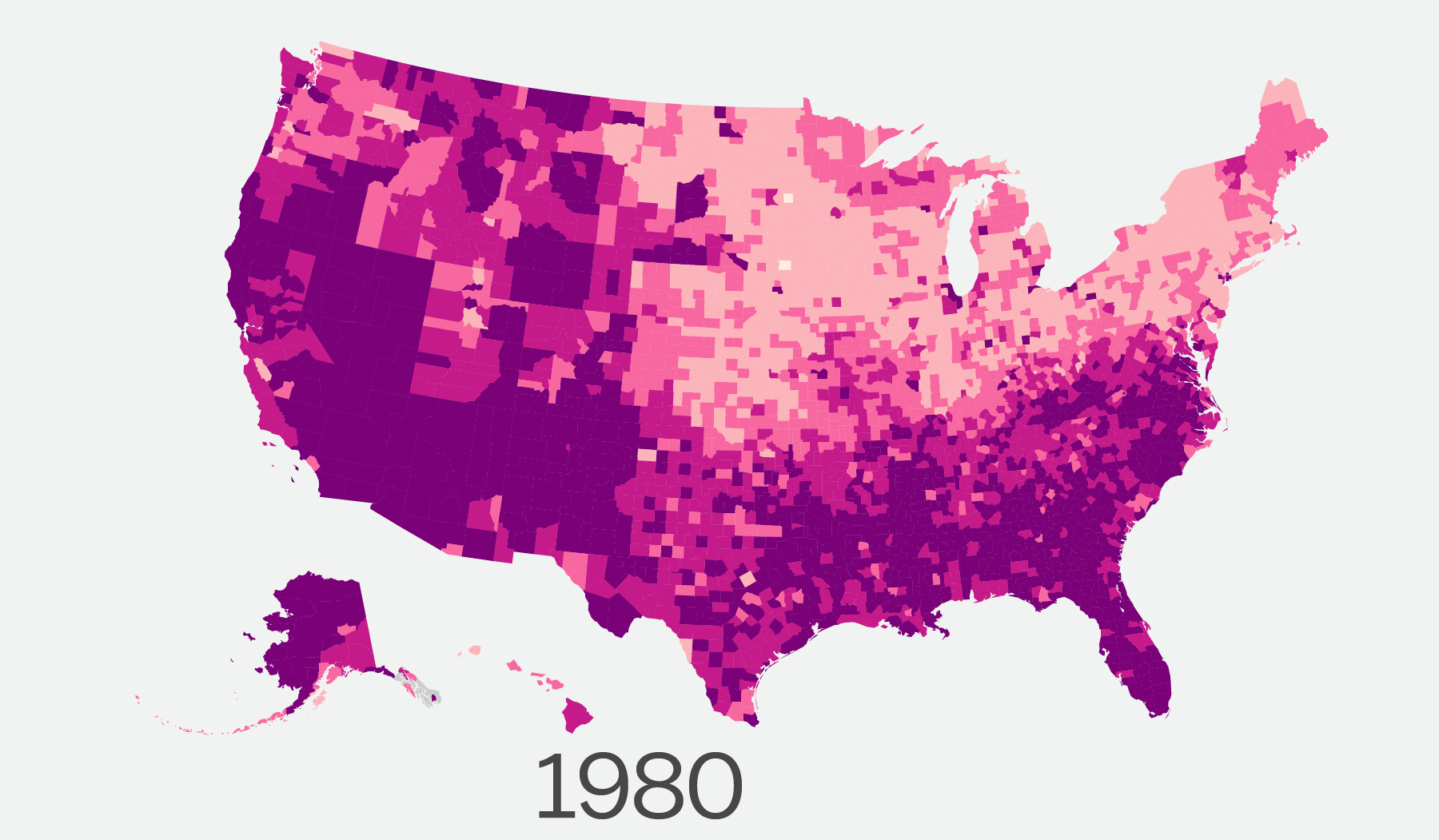 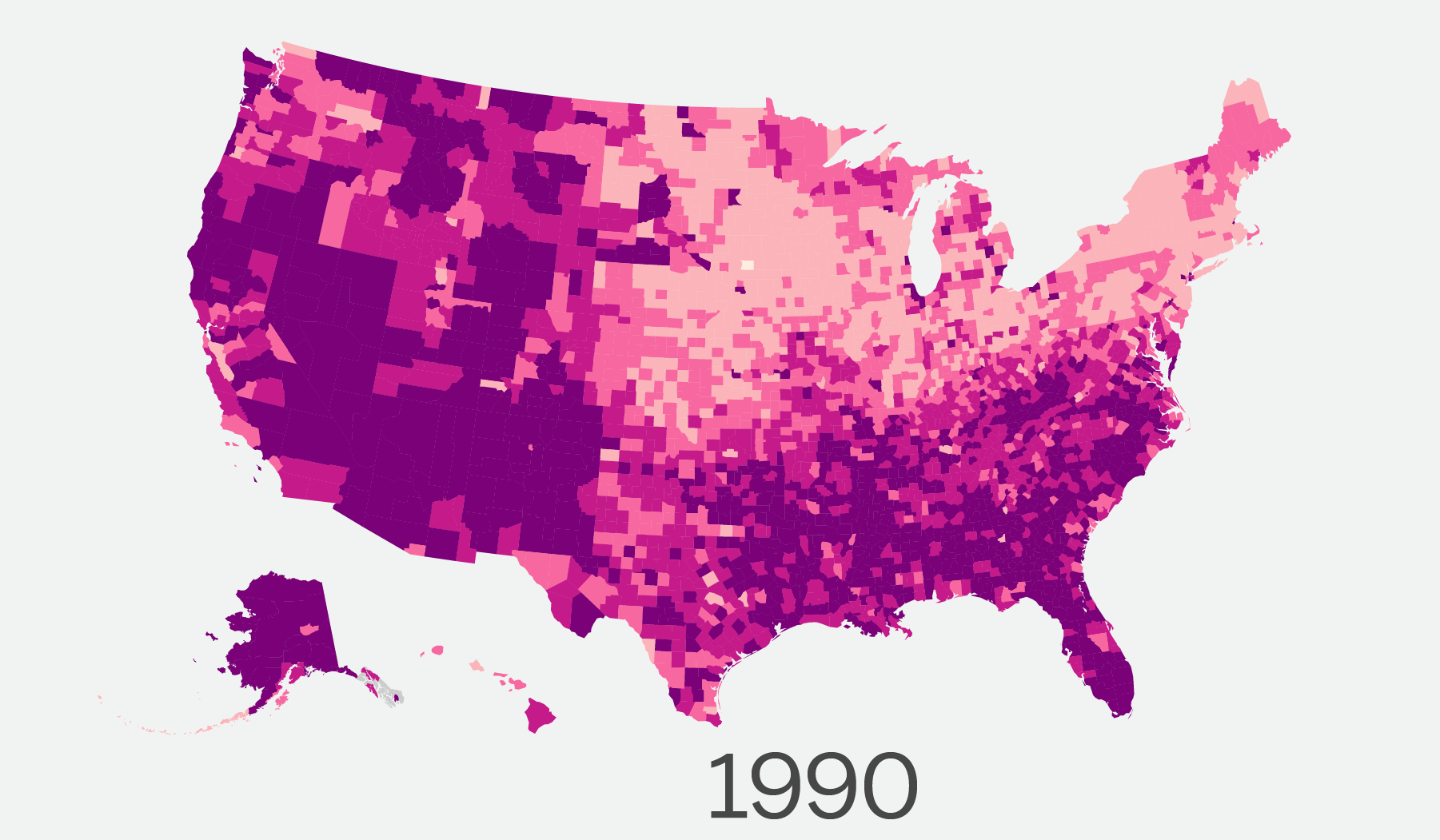 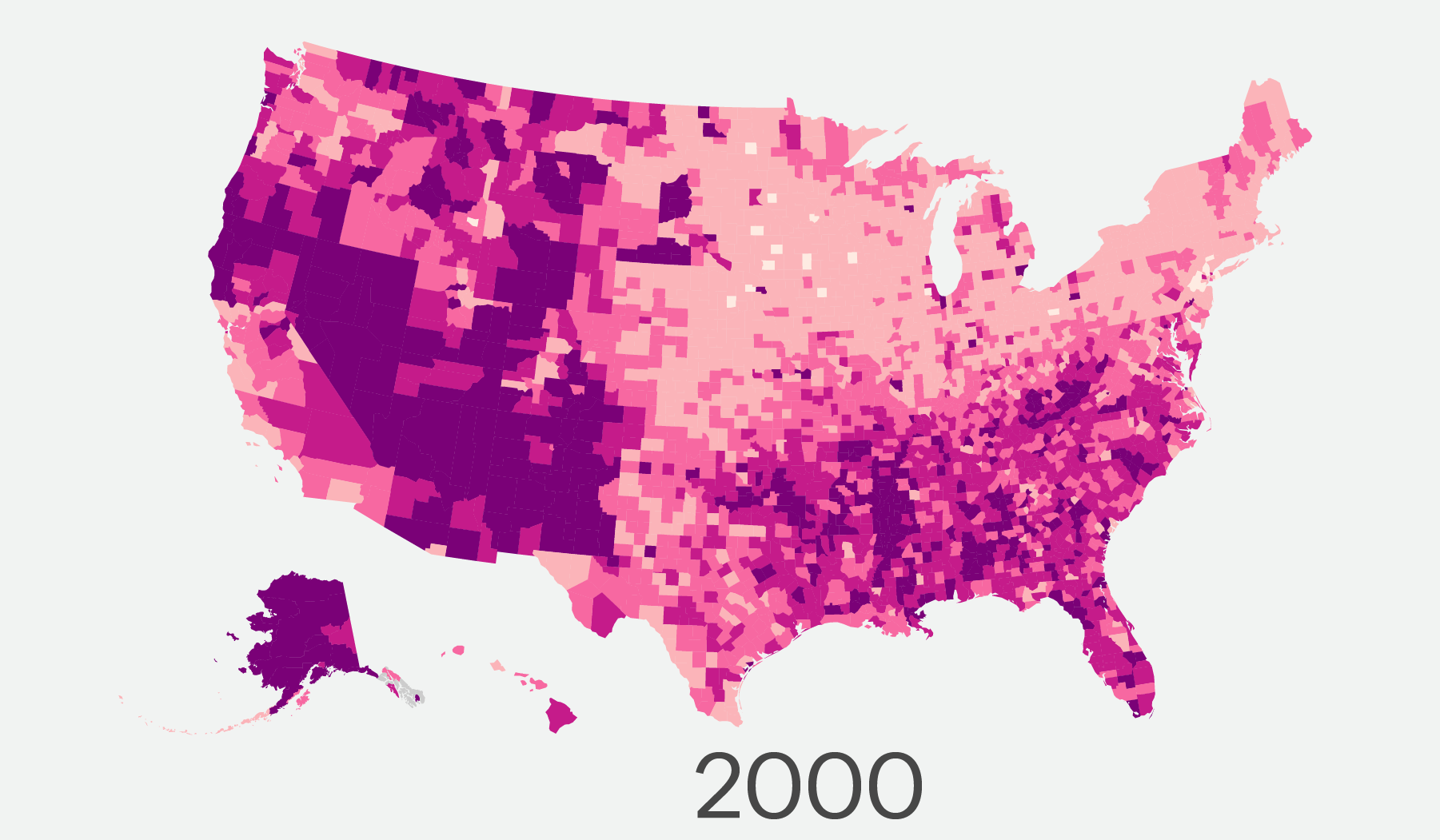 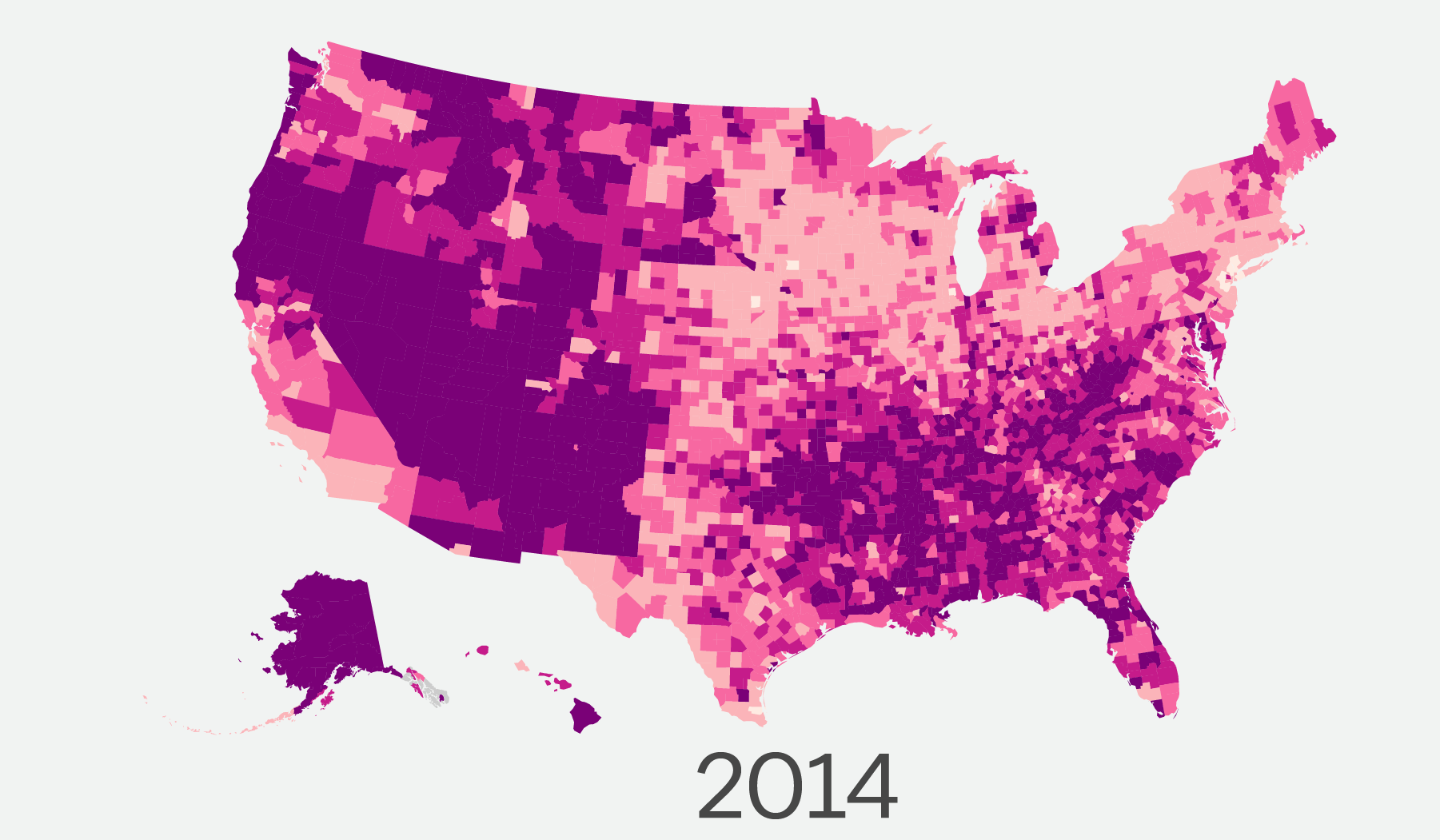 So are people just harming themselves in different ways for the same reason — despair over the future — or is there something else going on?

"These maps make it harder to come up with a universal explanation for recent mortality increases, and in my view, that’s a good thing, because there probably isn’t one," said McGill University epidemiologist Sam Harper.

"It is true that ‘despair over the future’ is something that could be implicated, and that is most clearly seen in rising suicide rates — but it hardly seems a sufficient explanation for the persistently high rates of cardiovascular disease we see in parts of the US South, which are largely driven by much longer term behavioral and health care risk factors," he says.

For now, all the researchers I spoke to were reluctant to hypothesize much more than this. But they say they are increasingly obsessed with these questions because it’s extremely unusual to see death rates increase in a developed country like the US.

In a commentary on last year’s blockbuster paper by the Princeton economists Angus Deaton and Anne Case on the rise of mortality among middle-aged white people, researchers flagged the rise in mortality rates among Russian men after the fall of the Soviet Union as one of the few examples of this trend.

"Every once in a while, you get these spikes and mortality jumps up — but there’s usually something you can point to to explain why it happened," said one of the authors of that commentary, Dartmouth health economist Jonathan Skinner. "You can point to the fact that millions of Russian men lost their secure jobs in the Soviet Union."

The same isn’t true for the mortality trends in the US today, he added. "The attribution here is just much more difficult because we think we have some idea — we are pointing to opioids — but we don’t really know yet."