Truvada has been called both a medicine to "end the HIV epidemic" and a "party drug."

Share All sharing options for: Critics worried an HIV prevention pill would encourage risky sex. So far, it hasn't.

When a new pill to prevent HIV hit the US market in 2012, it sharply divided the health community. Some experts hailed it as a major breakthrough in the fight against AIDS. Others worried it would turn back years of advocacy around condom use and encourage risky sex.

No one quibbled with the effectiveness of pre-exposure prophylaxis (or PrEP): Clinical trials have demonstrated incredible results — more than 90 percent of those at high risk for HIV who took PrEP didn't get the virus compared with those who didn't take a daily pill. The side effects were minimal. And by the time it was authorized for prevention, the drug had already been studied for more than a decade as a treatment for HIV-positive patients, so researchers were comfortable with PrEP's safety.

But some public health researchers and AIDS activists had concerns about how this drug might be used in the real world. They feared that people might take Truvada (the brand name for PrEP) and then abandon condoms altogether — leading to a rise in other types of sexually transmitted infections. Others worried about what might happen if people didn't take the pill every day, as directed. Would it still work? In the gay community, there was stigma to deal with, and some suggestion that those who opted for PrEP were more promiscuous, "Truvada whores."

When I talked to a group of young, gay black men in DC last September — perhaps the highest-risk population for HIV in the United States — I heard many of these same concerns. "I have had conversations with my friends — if they decide to take it, they usually discontinue using condoms all together," one said.

"My biggest fear," another added, "is that people are going to abuse it and not use a condom. It may make things worse."

Many of people's biggest fears about Truvada haven't been realized 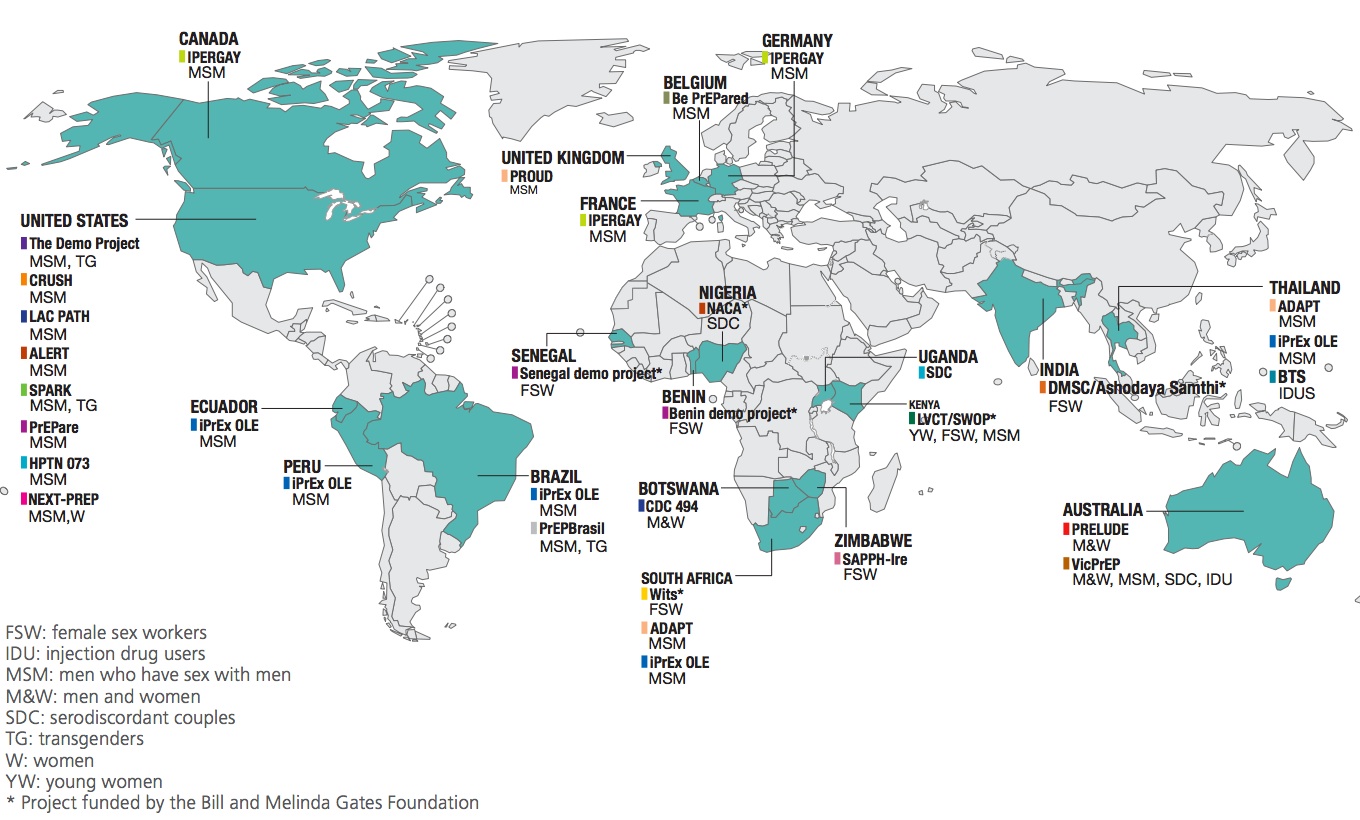 Ongoing studies on the real-world use of PrEP, as of February 2015. (WHO)

But over the past year, more and more studies looking at how PrEP is used outside of the clinical trial setting have emerged. And the good news is that most of the biggest fears haven't been realized so far.

This week, a study in the journal Clinical Infectious Diseases examined how PrEP was used in San Francisco among men who have sex with men. Over three years, the researchers followed men who started using PrEP to see whether they contracted the virus. Not one of the 657 patients on the drug got HIV.

That echoes the results of the Ipergay study published earlier this year. Researchers looked at what would happen if people didn't take the drug daily but instead took it before and after they had sex.

Even under these conditions, PrEP reduced HIV risk among men who have sex with men by an average of 86 percent. That's not quite as good as taking the drug every day, but it suggests that even imperfect use can be effective.

Another study of real-world usage that has been running in England, organized by the UK Medical Research Council, came to similar results this year. Known as the Proud study, it involved researchers looking at whether the daily use of Truvada reduced the risk of HIV among men who have sex with men compared to a group who began PrEP after 12 months. Again, this was a "real-world" study — not a clinical trial — and again, the participants cut their HIV risk by 86 percent.

But the results don't mean PrEP is a miracle drug

When the results of the Ipergay study came out, the CDC cautioned that researchers still don't know whether taking the drug before and after sex will work for people who have sex less frequently. Those users may forget they have a prescription, for example, if they hardly use it. And since the study was mainly focused on men who have sex with men, it's not clear how PrEP will work in the real world among other high-risk populations, like injection-drug users. Most guidelines now suggest PrEP only for the highest-risk populations.

What's more, there's reason to wonder whether PrEP may have at least some drawbacks. The most recent Clinical Infectious Diseases study — the one that found PrEP stopped all users from getting HIV — also found that a subset of men asked about their sexual behavior while on the drug reported using fewer condoms. And many of those were diagnosed with an STI a year after initiating the drug.

Since this was an observational study, it's not at all clear that the pill itself was responsible for the uptick in STIs. It's also possible the men who chose to take PrEP in the study — more than 1,000 were offered the drug, but only 657 chose to take it — were the highest risk group to begin with. The researchers weren't able to measure STIs in their patients before and after using PrEP and in a comparable group, so a lot more research is still needed to untangle these effects. It's also worth noting UK's Proud study found no evidence of an increase in STIs.

For Truvada to have a big impact, high-risk populations need to know about it and have access. Research has shown that awareness among men is still pretty low. In some of the developing countries that could most benefit from PrEP, the World Health Organization has noted, adherence to the drug — and its efficacy — were also lower. In other words, this is no silver bullet or magic pill for problems of health education and access.

Those caveats aside, the real-world study results so far suggest PrEP will be a promising tool in the HIV prevention arsenal.

"I think society has to be more real around the conversation of how we have sex and how we like to have sex," one of the men in DC, who was already using PrEP, told me in September. "I don't use condoms all the time," he added. On Truvada, he said he wasn't using condoms any less, but "I have less anxiety around sex. It gives me an additional level of protection."