Share All sharing options for: The unusual politics of Silicon Valley, explained

This post is part of a series on Silicon Valley's political endgame.

Of late, the news has been thick with clashes between Democratic politicians and Silicon Valley titans.

New York Mayor Bill de Blasio waged a high-profile battle with Uber, only to be soundly defeated by the company. Mark Zuckerberg and Bill Gates have spent millions of dollars funding the controversial public charter school movement and have become villains in the eyes of many liberals.

Meanwhile, Republicans are falling over themselves to embrace the technology industry. Republican presidential candidate Jeb Bush took an Uber as a campaign gimmick during a trip to San Francisco to tout his tech credentials. His competitor and libertarian icon Rand Paul opened up an operations office in the Valley to court young, anti-authoritarian techies.

But old-guard Democrats may come to regret this love affair. Tech elites love the Democratic Party in the same way they love the health care, transportation, and education industries — as a hodgepodge of aging leaders ripe for disruption.

For two years, a leading tech blog in the Valley, TechCrunch, charged me with covering the political interests of startup founders and the tech elite. I found that Silicon Valley’s denizens loved government, at least in theory — they saw it as a kind of alpha venture capitalist, funding citizens to be as healthy, civic, and entrepreneurial as possible. What they didn’t like was the liberal idea that government uses regulations to protect workers from the whims of capitalism. To them, the mechanisms of protection often act as an impediment to innovation. And when Silicon Valley leaders don't like something, they use their money to change it.

So I began collecting data on what startup founders believed and how they might use their influence and cash to change American politics. Among other new data sets, I conducted the first representative political psychology study of the tech industry, with the help of an exhaustive database of Silicon Valley founders called CrunchBase (which was created by TechCrunch).

I then compared the answers from those data sets with a SurveyMonkey panel of US population to see how and where Silicon Valley founders differed in their ideology from most Americans. Here’s what I found:

Only 3 percent of startup founders identify as Republican

"Most of Silicon Valley, most of the executives, tend to be Democrats"  —PayPal co-founder Peter Thiel 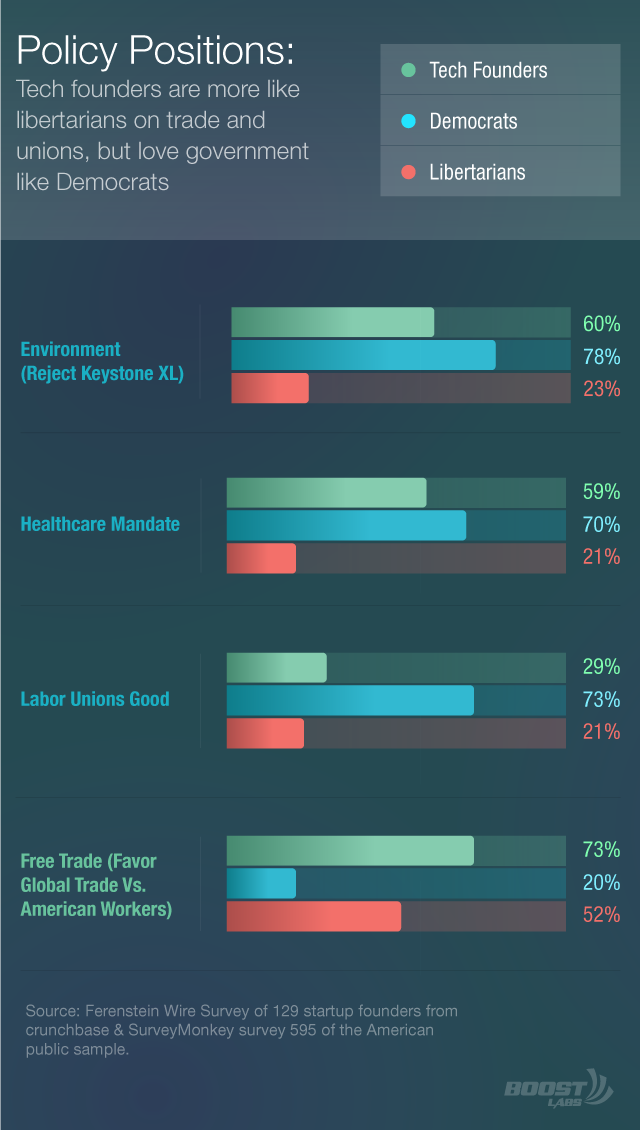 Founders believe that everyone can benefit from, and contribute to, change

The core philosophy of Silicon Valley is that nearly all change, over the long run, is progressive, and that there's no inherent conflict between citizens, corporations, and the government. This helps explain why the tech community eschews traditional political tribalism, such as labor unions, sovereignty, militarism, or small government advocates. All these traditions assume some conflict of interest between major groups.

"I tend to believe that most Silicon Valley people are very much long-term optimists. ... Could we have a bad 20 years? Absolutely. But if you’re working toward progress, your future will be better than your present." —LinkedIn founder Reid Hoffman

"Wanting to connect people is a pretty deep thing to me. It’s something that I’ve cared about since I was a kid. My mom told me these stories that a lot of boys when they’re younger have, like, Ninja Turtles or some toys, and they’re fighting. I just wanted them to make them connect and form villages and be peaceful and communicate." —Mark Zuckerberg, recalling stories his mother told him on the unique way he played with action figures as a child

As a result, Silicon Valley believes the government services themselves can be run like competitive, innovative organizations. The state also has a role in encouraging personal decisions that help maximize contributions to society.

That is, a belief in the free market and competition isn't wedded to libertarian individualism. Silicon Valley has found a way to be both radically free market and aggressively collectivist.

"Competition is healthy in all industries, profitable or not." —Internet Founder Survey respondent

Silicon Valley's support for government involvement in everyday decisions often shocks politicians who expect a more libertarian approach to the world. Last May, when Sen. Rand Paul held a public talk in Silicon Valley, he opened up his speech with a familiar question: "Who's a part of the leave-me-alone coalition?" No one clapped.

On the other hand, Silicon Valley types share libertarians’ love of competition and the market. Indeed, Silicon Valley types have an unusual faith in citizens' ability to solve their own problems. They are the only group I've found that believes having an active and informed citizenry is as important for society as reducing government regulation, reducing income inequality, or beefing up national security.

At their absolute core, Silicon Valley types are extreme idealists: They believe there is always a better solution that is great for nearly everyone. Life is just a matter of discovering great ideas through conversation, innovation, and education. 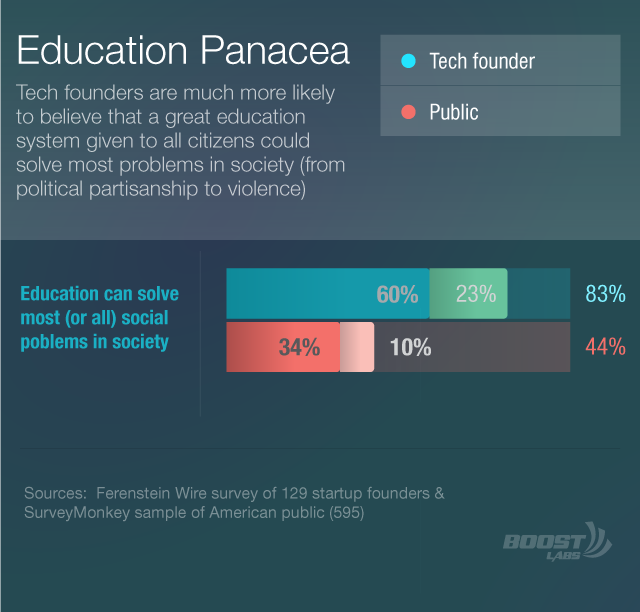 The conclusion I've come away with is that Silicon Valley represents an entirely new political category. It is a libertarian-like ideology within the Democratic Party. It loves competition and capitalism but believes the government has an essential role in empowering every person to give their best to society. People and organizations that can contribute more deserve more resources.

This belief is closest to what political scientists call communitarianism, the theory that active communities can solve problems better than either the market or the government alone. For instance, a communitarian might choose a neighborhood watch over more police or a carpool system over public transit.

And, indeed, this is not unlike what the ride-hailing industry has done by adding a carpool component to its smartphone apps, part of a long-held dream of Lyft's executives to reduce cars on the road through mass carpooling.

In essence, it is a civil society completely oriented toward innovation. They don't see conflicts between citizens, the government, big corporations, and other countries — just one big mass of people coming up with mutually beneficial solutions as fast as possible.

These utopian ideas are not entirely new. They've been around for a long time. But the economy is empowering these idealists like never before, and the Democratic Party is evidently the political vessel they've chosen to make it a reality. And given the amount of money they have to spend, and the kind of Democratic talent they are now buying — David Plouffe now works for Uber, and Jay Carney works for Amazon — traditional Democrats may soon find themselves on the wrong side of the disruption.

Read more details about the survey here (including methodological details). Some quotes have been edited for clarity.