Senate Republicans took initial steps Thursday to strip tens of millions of federal dollars from enemy No. 1 – Planned Parenthood. The effort is near certainly dead on arrival if it hits the President's desk — Obama has long threatened to veto any such efforts — but the vote gave legislators an opportunity to reignite a fight against the country's largest abortion provider, even in the wake of a deadly shooting at one of Planned Parenthood clinics last Friday.

Related Planned Parenthood gets $500 million in public funds. Here's where it goes.

In fact, Republicans used to have a more ambitious line of attack, one that aimed to take on all providers of the procedure. But since 2011, they’ve shifted strategy. Instead of focusing on a hazy notion of abortion providers, they created a clear enemy in Planned Parenthood.

The chief outcome of this strategy was success in states, where local legislators have followed up and voted to defund Planned Parenthood. At the same time, anti-abortion outside groups have kept up the same cause, focusing on the nonprofit as a prime target in the fight to end abortion.

So now in the wake of videos that went viral this summer, showing controversial discussions of Planned Parenthood procuring fetal tissue for researchers, Republicans had the perfect opportunity to revisit their nemesis in presidential primary debates — and on Capitol Hill.

In the wake of Roe v. Wade, the Supreme Court case that legalized abortion, Republican legislators looked for ways that they could curtail abortion access. First they looked at a constitutional amendment to ban abortion, but that quickly ran into obstacles. There was no way legislators could get three-fourths of the states to ratify such a change.

Rep. Henry Hyde (R-IL) came up with a different and easier-to-pass approach: passing a bill that would bar the government from paying for abortions. That amendment passed in 1976 and has been in place ever since.

The Hyde amendment bars the government from paying for abortions at Planned Parenthood — or any other provider — except in cases of rape, incest, or to save the life or health of the mother. What it didn't do, however, was bar the government from funding women's health providers who provide abortions to do other things.

That effort didn't start in earnest for another 35 years.

The defund Planned Parenthood movement arguably traces back to one key politician: Mike Pence. Pence is currently the governor of Indiana, but before that he was a congressman from the same state dead set on defunding the country's largest abortion provider.

"If Planned Parenthood wants to be involved in providing counseling services and HIV testing, they ought not be in the business of providing abortions," Pence told me in 2011, when I was a reporter at Politico. "As long as they aspire to do that, I’ll be after them."

For three legislative sessions in a row, Pence had introduced legislation that would prevent any entity that provides abortion from receiving funds through Title X, the only federal program dedicated to reproductive health and family planning. But the bills would typically languish in committee, never even making it to the House floor.

But in February 2011, Pence changed his approach: He introduced a budget amendment that would strip Planned Parenthood — and Planned Parenthood alone — of all federal funding. This was about a year after Obamacare passed, and many conservatives were still angry over a health law provision that allowed plans purchased with government subsidies to cover abortion. (The White House said that insurers would have to ensure only private contributions covered abortions, but anti-abortion groups wrote this off as a budget gimmick.)

That time, Pence's proposal did get traction: The budget amendment to defund Planned Parenthood nearly shut down the federal government. House Speaker John Boehner got behind the cause, and it became a final sticking point in negotiations with the White House. Boehner ultimately abandoned that demand, but the idea of attacking Planned Parenthood's funding still stuck.

The April 2011 budget showdown made it clear that the Obama administration would not budge on Planned Parenthood funding. It also catalyzed a wave of state-level attempts to cut off the nonprofit's funding, especially in states with Republican-controlled legislators.

In the 1990s, a small handful of states barred abortion providers from receiving public family planning funds. But states took up the cause again in earnest after the spending showdown.

Before 2011, only one state — Colorado — had a law that banned abortion providers from receiving state family planning dollars. Since 2011, six more states have passed such laws, according to the Guttmacher Institute, a nonprofit that supports abortion rights.

Some states took even more aggressive approaches, like trying to strip Planned Parenthood of Medicaid funding. Indiana, Pence's home state, was the first to attempt such a law. But the law ultimately failed when the Obama administration threatened to pull all of the state's Medicaid funding if it discriminated against abortion providers.

What it would mean if Congress really did defund Planned Parenthood

The defunding bill is an exercise in politics, so legislators can say they voted to end federal funds for the country's largest abortion provider. President Obama has repeatedly said he will veto any such bill should it land on his desk.

But if this bill ever did pass, it would have a huge effect on Planned Parenthood.

Planned Parenthood receives more than $500 million annually in government funding, mostly through Medicaid and grants. That accounts for 40 percent of the organization's budget.

Most of this money goes toward providing low-income women with family planning services like STD screening and contraceptive coverage. Planned Parenthood is, without a doubt, one of the largest providers in this space: Of the 6.7 million women who rely on public programs to pay for contraceptives, 2.4 million of them — 36 percent — do so at Planned Parenthood's 817 clinics across the country.

Because Planned Parenthood is such a large provider in this space, it's hard to see other clinics stepping in to fill the gap that it would leave. 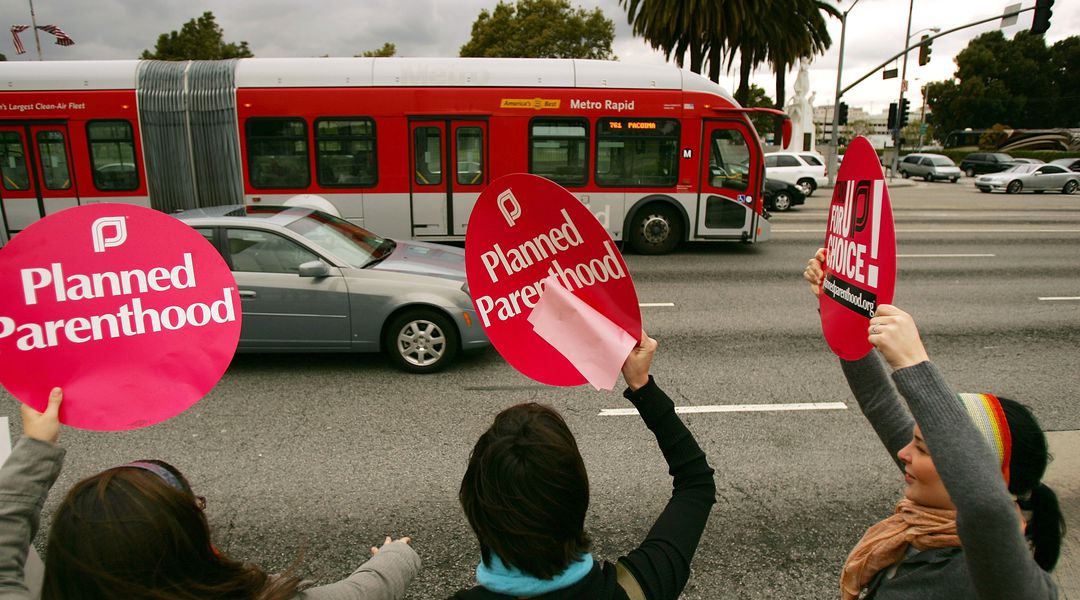