If mass mammography screening for breast cancer worked well, fewer women would die from the disease.

And yet, a new study published in JAMA Internal Medicine has found something that may seem counterintuitive: More breast cancer screening didn't actually save lives. Screening did however lead to more "overdiagnosis," detecting cancers that would not have been fatal or even harmful.

Related The problem with Taylor Swift's advice about cancer screening

The research, led by Richard Wilson of Harvard University, revealed that in more than 500 US counties, mammography screening programs were linked with more diagnoses of smaller breast cancers — but not with fewer deaths or with fewer larger breast cancers (which theoretically would be prevented by finding the disease early through screening).

To be clear: Mass screening is different from using technologies like ultrasounds to diagnose people at risk of a disease or who have symptoms that require investigation. And not all mass screening programs are bad. Colorectal cancer screening, for example, has been shown to save lives as a result of early detection, and the Pap test transformed cervical cancer into a treatable disease.

But this isn't the first study to call into question the benefits of mammography and whether women are too often the victims of overdiagnosis.

The trouble with overdiagnosis is that while the cancers doctors find wouldn't have harmed their patients, the treatment and stress that result from the diagnosis probably will. 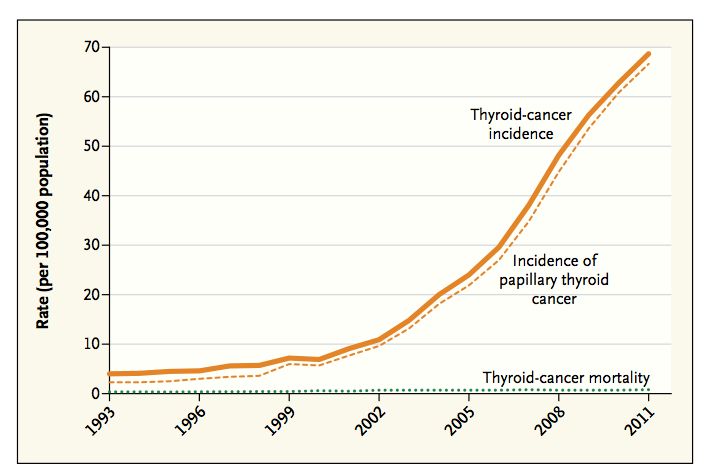 Overdiagnosis in thyroid cancer: While the incidence of the disease increased after a screening program was instituted in South Korea, the thyroid cancer mortality rate stayed the same. (New England Journal of Medicine)

The medical community has known about overdiagnosis and overtreatment for years, documenting the problem in a range of cancers — in breast, prostate, lung, and thyroid (which you can see in the chart above).

This raises a tough question: What should the medical community do about overdiagnosis? In a related commentary in the journal, a pair of doctors from the University of Washington School of Medicine note that the estimates of overdiagnosis of breast cancer are "frustratingly broad" — from less than 10 percent to 50 percent or more of women who get screened. In other words, we don't actually know how bad the problem is.

"Sadly," they write, "we are left in a conundrum. Women will increasingly approach their physicians with questions and concerns about overdiagnosis, and we have no clear answers to provide."

The authors of the newest study don't advocate no screening. Instead, they note that the benefits of screening will probably be more favorable when screening is directed at people with a high risk of the disease — such as those with a family history of breast cancer.

The US Preventive Services Task Force, which analyzes the best available evidence to create guidelines for doctors, now recommends biennial mammography screening for the general population in women ages 50 to 74. For women under 50 and over 75 — who aren't at a high risk of breast cancer — the benefits of mass screening are less clear.

There are small things doctors can do that still don't happen often enough. For example, most women aren't told about the potential downsides of mammography screening — even though they're almost always briefed on the benefits.

How to think about the benefits and harms of mammography. (Harding Center for Risk Literacy)

For now, it's up to patients to talk to their doctors about their particular risk profiles and how to screen accordingly. We also need to remember that in medicine, more often than not, we generally overestimate the benefits and underestimate the harms.

WATCH: The naked mole rat might help us cure cancer