Share All sharing options for: There's deep irony in removing the Confederate flag using the rhetoric of states' rights

There was an incongruous message wrapped inside South Carolina Governor Nikki Haley's call for the Confederate flag to be removed from the Capitol grounds in Columbia: states' rights.

The flag issue may now be off the table for the 2016 Republican presidential contenders. But not before many of the GOP candidates — even some who hinted at opposing the flag — showed their allegiance to state sovereignty. For example, Wisconsin Governor Scott Walker, who later applauded Haley for the call she made, tweeted this on Saturday:

RE: confederate flag in SC, it's a state issue & I fully expect SC leaders to debate this after the victim's families have time to mourn-SKW 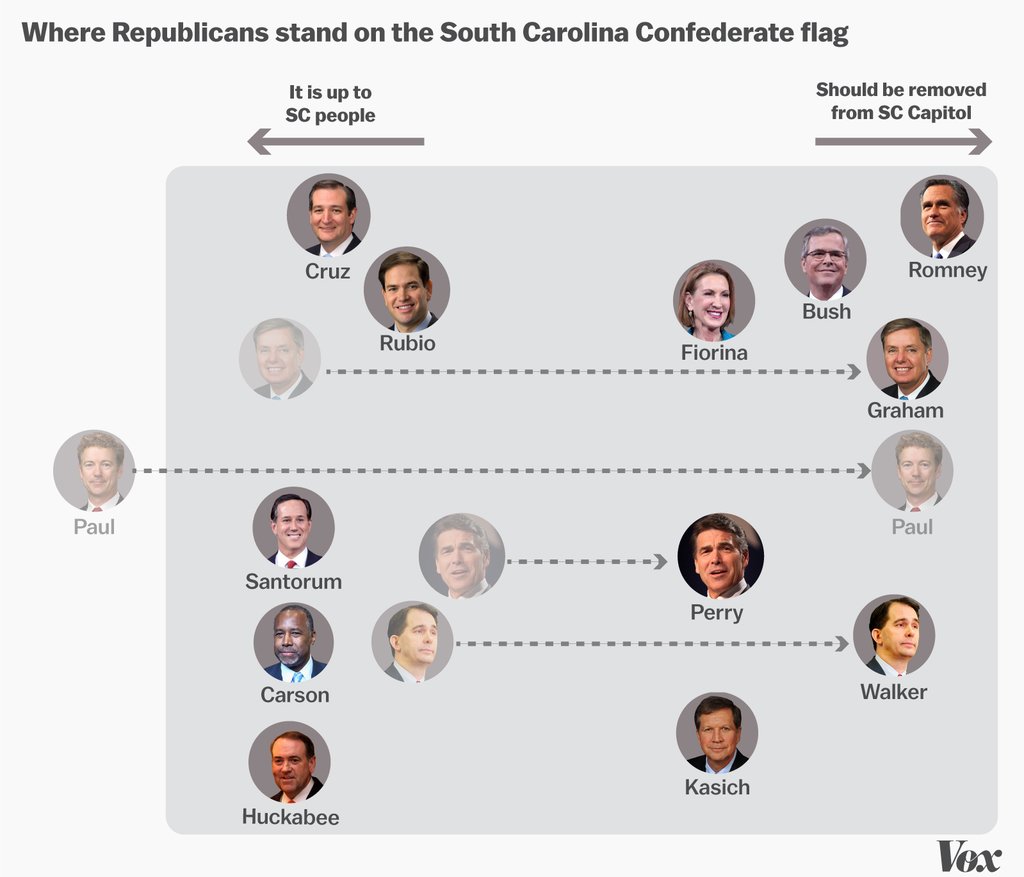 South Carolina may be forced to surrender the flag in the wake of the racially motivated murder of nine black worshipers in a Charleston church last week, but the Republican political class is signaling with its rhetoric that it's worth the sacrifice to preserve states' rights.

States' rights have been the cover under which generations of southerners have argued for slavery, lynching, Jim Crow laws, and the proud display of the Confederate flag. And it's been a historic dodge for politicians — Democrats in the pre-Civil Rights era and Republicans since — who wanted to court Southerners without alienating the rest of the country by playing directly to race.

The history of Southern states' rights used as a cover for racial discrimination begins in the early 1800s, when South Carolina refused to abide by two federal tariffs — the first major volley in a decades-long effort to protect slavery in the state. The slave-owning classes in the South looked at the tariffs as punitive measures that would undermine the Southern economy and slavery.

Acting in accordance with Vice President John C. Calhoun's theory that a state government could nullify a federal law that it deemed unconstitutional, South Carolina objected to tariffs imposed in 1828 and 1832.

President Andrew Jackson believed that the fight over the tariffs, which were viewed in the South as a thumb on the scale of economic power, was a proxy for the coming battle over slavery and secession. In December 1832, after he had just been reelected president, Jackson issued a proclamation declaring that the state had no right to nullify a federal law. The next year, he signed a use-of-force law allowing him to deploy the military to enforce the tariffs. South Carolina agreed to a compromise on the tariffs.

It's difficult to disentangle the moral depravity of slavery from the economic system of antebellum America — where Northern manufacturing and commerce profited from Southern agricultural production — and the states' rights genesis story doesn't help.

From the Southern point of view, the federal government had intruded to impose costs on South Carolina, with the North benefiting. But Jackson made clear in a letter the following year that he didn't think the fight was about duties at all.

"The tariff was only the pretext and disunion and a Southern confederacy the real object," he wrote. "The next pretext will be the negro, or slavery question."

The fundamental struggle between the North and South would play out over the next generation as a battle over states' rights, with the union expanding and admitting states as either free or slave states.

The 1820 Missouri Compromise, which essentially drew a line across the country dividing slave states and non-slave states, was destroyed in 1854 by the Kansas-Nebraska Act, which provided for "popular sovereignty" — states' rights — on the slavery question in those territories.

Shortly after the country elected Abraham Lincoln as president in 1860, South Carolina became the first state to secede from the union, citing the North's abandonment of principles of state sovereignty embedded in the Constitution. Or, as Albany Law School professor Paul Finkelman put it in the New York Times:

"The Palmetto State asserted that slavery was threatened because the North no longer followed the Constitution, which protected states’ rights to maintain the institution of slavery and protected the rights of individual southerners to retrieve fugitive slaves."

From Jim Crow to Strom Thurmond

After the post-Civil War Reconstruction era ended, states and localities — mostly in the South — began writing and enforcing "Jim Crow" laws intended to disenfranchise, segregate, and intimidate African Americans. They would defend those as the right of states to govern as they saw fit.

In the late 19th and early 20th centuries, lynchings became common in Southern states. Southern senators thwarted efforts to stop the practice at the federal level. Some of them cited their states' rights not to be interfered with by the federal government, as the Washington Post noted in a 2005 story:

"Excerpts from the Congressional Record show some senators argued that such laws would interfere with states' rights. Others, however, delivered impassioned speeches about how lynching helped control what they characterized as a threat to white women and also served to keep the races separate, according to records provided by the Committee for a Formal Apology, a group that has lobbied the Senate."

In 1948, Strom Thurmond, then the governor of South Carolina and later a senator from the state, led a breakaway camp from the Democratic Party to form the "States' Rights Democratic Party" — known as the "Dixiecrats."

Their platform included the following:

"We stand for the segregation of the races and the racial integrity of each race; the constitutional right to choose one's associates; to accept private employment without governmental interference, and to earn one's living in any lawful way. We oppose the elimination of segregation, the repeal of miscegenation statutes, the control of private employment by Federal bureaucrats called for by the misnamed civil rights program. We favor home-rule, local self-government and a minimum interference with individual rights."

Former Arkansas Gov. Mike Huckabee, one of the Republican presidential candidates, said over the weekend in an interview with NBC that the flag shouldn't be a national issue because it's a state matter.

"People want their president to be focused on the economy, keeping America safe. I don't think they want us to weigh in on every little issue in all 50 states," he said.

Huckabee should know about the clash between federal and state governments. It was his state's Democratic governor, Orval Faubus, who ordered the Arkansas National Guard to prevent the desegregation of Little Rock Central High School three years after the landmark Brown v. Board of Education case. President Dwight Eisenhower federalized the guard to move them out of the area and sent Army troops to protect black students who desegregated the school.

Similar scenes would play out across the South over the integration of schools and universities over the next several years. In his 1963 inaugural address, Alabama Gov. George Wallace, a Democrat, thundered about the right of states not to be tyrannized by the federal government.

"Today I have stood, where once Jefferson Davis stood, and took an oath to my people. It is very appropriate then that from this Cradle of the Confederacy, this very Heart of the Great Anglo-Saxon Southland, that today we sound the drum for freedom as have our generations of forebears before us done, time and time again through history. Let us rise to the call of freedom-loving blood that is in us and send our answer to the tyranny that clanks its chains upon the South. In the name of the greatest people that have ever trod this earth, I draw the line in the dust and toss the gauntlet before the feet of tyranny and I say . . . segregation today . . . segregation tomorrow . . . segregation forever."

Wallace would later seek the presidency, as a third-party candidate in 1968 and as a Democrat in 1972. He survived an assassination attempt during the latter run but was left paralyzed. That was the year that Richard Nixon won reelection, for the second time using his "Southern strategy" to attract votes from white former Democrats.

In August 1980, 16 years after three civil rights workers were murdered nearby, Ronald Reagan went to Philadelphia, Mississippi, and declared, "I believe in states' rights." Four years after Jimmy Carter had swept the Southern states in winning the presidency, Reagan took all of them but Carter's home state of Georgia.

What now in South Carolina?

The flag has long been a dividing line for Republican presidential hopefuls in the South Carolina primary, a proxy for the right of states to fight federal overreach — first on slavery, then on segregation, and now on a variety of issues.

In 2000, John McCain flip-flopped on the flag, calling it a "symbol of racism and slavery" one day and then a "symbol of heritage" the next.

"I feared that if I answered honestly, I could not win the South Carolina primary," he said later that year. "So I chose to compromise my principles."

Governor Haley spoke Monday of the flag as "a symbol of respect, integrity, and duty" for some and of a "brutally oppressive" past for others.

"That flag, while an integral part of our past, does not represent the future of our great state," she said. "The time for action is coming soon."

But Haley also framed the decision as one that should be left to the state — just like many of the Republican presidential contenders. Since there's no movement for the federal government to intercede, there's no need to defend the state's right to make its own call. It's just a political dog whistle to conservative Southern whites. When politicians hit that note now, it will be heard through the commotion of the Confederate flag debate, and it will signal that they're not ready to stop fighting for their states' rights to oppose the federal government — even on policies that discriminate.