Map: Here's where the world is running out of groundwater

Share All sharing options for: Map: Here's where the world is running out of groundwater

Some of the world's most important farming regions rely on freshwater from large underground aquifers that have filled up slowly over thousands of years. Think of the Central Valley aquifer system in California. Or the Indus basin in Pakistan and India. This groundwater is particularly valuable when rain is scarce or during droughts.

But that groundwater may not last forever. Data from NASA's Grace satellites suggests that 13 of the world's 37 biggest aquifers are being seriously depleted by irrigation and other uses much faster than they can be recharged by rain or runoff. And, disturbingly, we don't even know how much water is left in these basins. That's according to a 2015 paper in Water Resources Research.

The map below gives an overview. There were 21 major groundwater basins — in red, orange, and yellow — that lost water faster than they could be recharged between 2003 and 2013. The 16 major aquifers in blue, by contrast, gained water during that period. Click to enlarge: 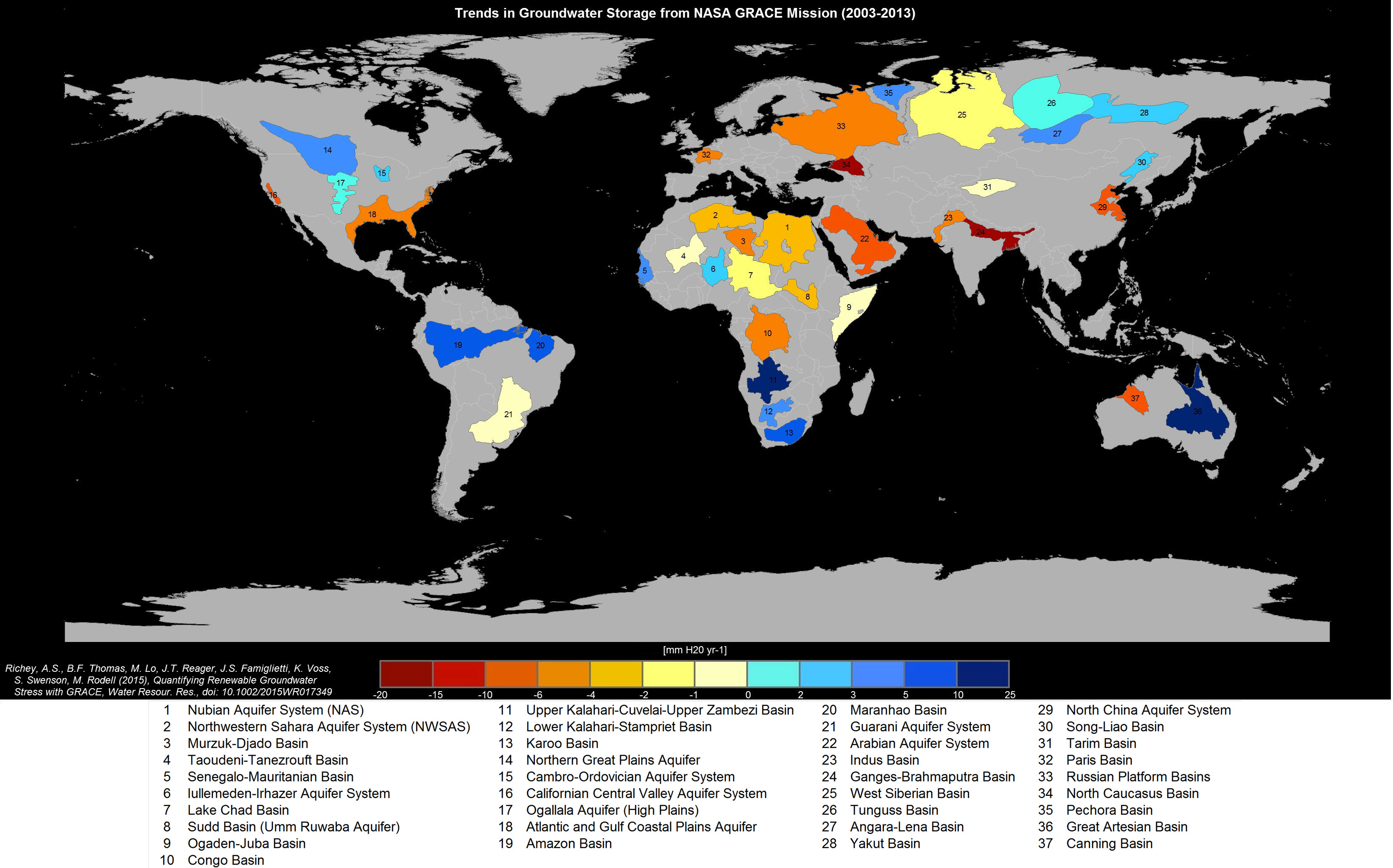 The researchers found that 13 basins around the world — fully one-third of the total — appeared to be in serious trouble.

Eight aquifer systems could be categorized as "overstressed": that is, there's hardly any natural recharge to offset the water being consumed. In the direst state was the Arabian aquifer system beneath Saudi Arabia and Yemen, which provides water for 60 million people and is being depleted by irrigation for agriculture. Also in bad shape were the Indus Basin that straddles India and Pakistan and the Murzuq-Djado Basin in Africa.

Another five aquifer systems were categorized as "extremely" or "highly" stressed — they're being replenished by some rainwater, but not nearly enough to offset withdrawals. That list includes the aquifers underneath California's Central Valley. During California's recent brutal, five-year drought, many farmers compensated for the lack of surface water by pumping groundwater at increasing rates. (There are few regulations around this, though California's legislature recently passed laws that will gradually regulate groundwater withdrawals.)

The result? The basins beneath the Central Valley are being depleted, and the ground is actually sinking, which in turn means these aquifers will be able to store less water in the future. Farmers are losing a crucial buffer against both this drought, if it persists, and future droughts.

The big question: How soon until these aquifers run dry?

Here's the other troubling bit: It's unclear exactly when some of these stressed aquifers might be completely depleted — no one knows for sure how much water they actually contain.

In a companion paper in Water Resources Research, the researchers took stock of how little we know about these basins. In the highly stressed Northwest Sahara Aquifer System, for instance, estimates of when the system will be fully drained run anywhere from 10 years to 21,000 years. In order to get better measurements, researchers would have to drill down through many rock layers to measure how much water is there — a difficult task, but not impossible.

"We don’t actually know how much is stored in each of these aquifers. Estimates of remaining storage might vary from decades to millennia," said Alexandra Richey, a graduate student at UC Irvine and lead author on both papers, in a press release. "In a water-scarce society, we can no longer tolerate this level of uncertainty, especially since groundwater is disappearing so rapidly."

The researchers note that we should figure this out if we want to manage these aquifers properly — and make sure they last for many years to come. Hundreds of millions of people now rely on aquifers that are rapidly being depleted. And once they're gone, they can't easily be refilled.

-- Saudi Arabia squandered its groundwater and agriculture collapsed. The rest of the world should take note.

-- Note that we don't have to sit idly by while aquifers get depleted. Arizona, for instance, has policies to promote "water banking" — in which farmers, cities, and other users have incentives to percolate down into sub-surface aquifers to use for later, during periods when surface water is scarce. In Yale360 Environment, Erica Gies reports on efforts to transplant these initiatives to California, which hasn't managed its groundwater quite as adeptly.