What Alberta's surprising election results could mean for the oil sands

Share All sharing options for: What Alberta's surprising election results could mean for the oil sands

As a rule, provincial elections in Canada don't attract a ton of attention in the United States. Why would they? It's not like people in Canada are fixated every time there's a governor's race in Pennsylvania.

But then came Tuesday's stunning election in Alberta — and, suddenly, the entire world was interested in the results.

Partly it's just a fascinating political story. Alberta is the conservative heart of Canada, with an economy dominated by the oil industry. The Conservative party has held power there for 43 years. On Tuesday, everything changed. The New Democratic Party (NDP), a labor-left party long on the political sidelines, unexpectedly won a majority of seats in the provincial legislature (in part because two right-wing parties split the vote). Imagine if liberal Democrats suddenly controlled the Texas statehouse. And had a supermajority.

A more substantive reason for the attention, though, has to do with energy. Canada is the world's fifth-largest oil producer, with about 78 percent produced in Alberta. Four-fifths of that comes from the province's vast oil sands — the root of the endless controversy over the Keystone XL pipeline in the United States. The recent increase in Alberta's oil-sands production has also been a big factor pushing down global oil prices. It's an important place:

And now comes an election that could, potentially, roil this entire arrangement. Conservative governments in Alberta have long had a relatively light hand in regulating the oil industry. Suddenly there's a new, left-leaning NDP government promising to negotiate new climate policies, to increase oil and gas royalties, and to quit lobbying President Obama to approve the Keystone XL pipeline.

So what will this election mean for those famous oil sands?

I asked Andrew Leach, an economist at the University of Alberta, whether the election could upend the oil industry. He first cautioned that it's too soon to say precisely — in part because the NDP's proposals on energy policy are actually quite light on details.

"This is why you're seeing so many different reactions right now," Leach said. "You get people who say the NDP will turn Alberta into Norway. Or that it will be a complete disaster for the oil industry. Or others arguing that the election won't change the industry that much because there's not that much room to move."

Instead, he walked through a couple of different broad policies that the NDP could pursue — with the caveat that the fine print, as always, will prove crucial:

1) Climate policy. First, the new provincial premier, Rachel Notley, has vowed to work with Canada's federal government on some sort of national climate change policy. That, in itself, is notable: Canada has become a climate pariah in recent years, bowing out of the Kyoto Protocol and missing its targets for cutting greenhouse-gas emissions. And oil-rich Alberta, the power base for Conservative Prime Minister Stephen Harper, has long been seen as a key obstacle to more ambitious climate-change policies.

That said, the NDP hasn't given any specifics on what type of climate policy it will pursue. Many greens, particularly in the United States, might prefer a focus on Alberta's oil sands. After all, producing crude from those sands is more energy-intensive to produce than regular crude, and hence worse for global warming. And there's a vast amount of oil up there.

The hitch, though, is that the options for reducing emissions from individual oil sands projects are fairly limited, Leach notes. Companies extract petroleum from these sands by digging them up and heating them with water or by injecting steam underground. Much of the extra energy needed for production goes into making this steam — but it's hard to find more efficient ways of making steam. (Companies like Suncor are exploring methods to extract more oil from sands for a given amount of steam, though that's probably not the solution greens prefer.)

Instead, Leach notes, any climate policy that Alberta does pursue is more likely to focus on coal plants, which still supply about 43 percent of the province's electricity. The NDP has said it would aim to phase out coal power in the province more quickly than its predecessors planned. That's a big deal for emissions, but it's less of an oil story.

2) Oil royalties. Perhaps more significant for the future of the oil sands is the fact that the NDP has pledged to review the royalties that oil companies pay to Alberta's government. These royalties have long been kept fairly low to encourage growth and development: Alberta's royalties run about 25 to 40 percent of oil company profits; in Norway, by contrast, royalties run to 80 percent of profits.

The NDP initially plans to make this royalty process more transparent. Less clear is whether the government will raise the rates. The crash in global oil prices is going to increase Alberta's deficit by around $7 billion this year, and the NDP has signaled it will raise more revenue to partially plug the hole. (The party also plans to raise the corporate tax rate from 10 percent to 12 percent.)

An increase in royalties, Leach said, would probably put a crimp in some oil-sands production at the margins though it's difficult to predict how much. "We're still trying to figure out the effects of the recent oil price crash and what the baseline is," he cautions.

Now throw royalties into the mix. Since oil sands projects require a steep upfront investment but are relatively cheap to operate, an increase in royalties would probably affect future projects more than existing ones. But even here, it will be hard to tease out the various factors at play. In the coming months, Leach noted, we may see companies canceling projects in Alberta — but these might have been planned cancellations that simply weren't public yet, a result of the price crash rather than new government policies. 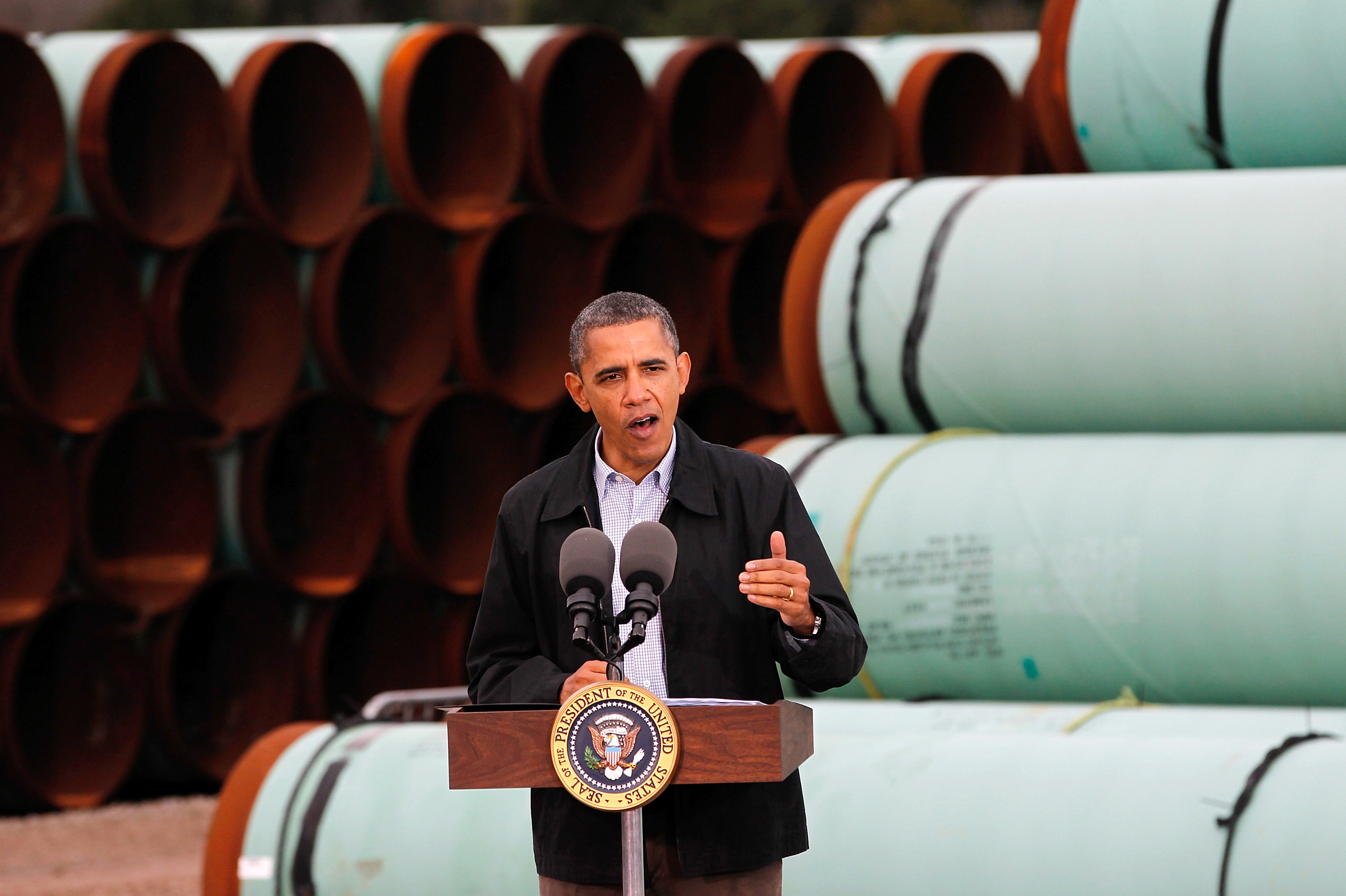 3) Pipelines. Then there's the question of pipelines, the story that arguably gets the most attention in the United States.

At the moment, President Obama is still wavering on whether to approve or deny the Keystone XL pipeline, which would transport 730,000 barrels per day of Alberta's crude down to refineries in Texas, thereby helping oil sands expand. Green groups have argued that this will exacerbate global warming, while Canadian politicians have long pressed Obama to approve it.

Now that's changing. Alberta's new premier, Notley, has famously said she'll quit lobbying Washington over Keystone. But this may be less significant than it first appears. After all, if Obama blocks the pipeline, it won't be because of insufficient lobbying by Alberta's government. It will be because Alberta's oil sands have a reputation for being terrible for climate change.

What's more, Notley isn't broadly anti-pipeline. She supports Kinder Morgan's proposal for a TransMountain line from Alberta to British Columbia as well as the proposed Energy East pipeline to the Atlantic, which would be bigger than Keystone XL and bolster the oil-sands industry. The one pipeline she's soured on, the Gateway project to British Columbia, has little chance of being completed anyway, thanks to fierce opposition from First Nations tribes. So it's not clear if the NDP's pipeline stance will have a big practical impact.

Add it all up, and Tuesday's election could have a big impact on Canada's oil industry, especially if there's some huge change to Alberta's royalty policy. But it's also possible to envision a scenario where surprisingly little changes, at least where oil's concerned.

-- Some good reading on the political background to Alberta's election from Canadian newspapers, here and here.

-- For much more detail on energy, Andrew Leach had a very thorough analysis of the NDP's energy platform back in late April.