Share All sharing options for: A surprising number of Americans don't see themselves as hyper-masculine or hyper-feminine

A surprising number of Americans are willing to reject traditional gender stereotypes, according to a new Vox poll.

Roughly 15 percent of Americans said they fall in the middle of the masculine versus feminine spectrum, saying they don't identify as more masculine or more feminine, the survey of more than 1,000 Americans, conducted by research and communications firm PerryUndem, found.

Male and female respondents were asked to state where they fall on a scale of 0 (very masculine) to 10 (very feminine). It's possible people who chose 5 were saying they are equally feminine and masculine or neither.

These results measure how people express their gender, but not their gender identity, which is someone's personal identification as a man, a woman, or a gender outside of societal norms. Gender expression refers to characteristics and behaviors a person identifies with that can be viewed as masculine, feminine, a mix of both, or neither — according to the poll, gender expression is fluid for many Americans, regardless of whether they are men or women.

Men were more likely to reject traditional notions socially attributed to their gender. Roughly one in five men said they're very masculine, and one in five women identified as very feminine. But 25 percent of men didn't identify as more masculine, while 20 percent of women didn't say they're more feminine.

Taken together, the results show a great majority of Americans don't identify with a gender different from the one they were assigned at birth, but a lot of people partially reject rigid gender stereotypes.

If you're curious where you fall on all the different spectrums, Trans Student Educational Resources developed this handy visual to help people find out: 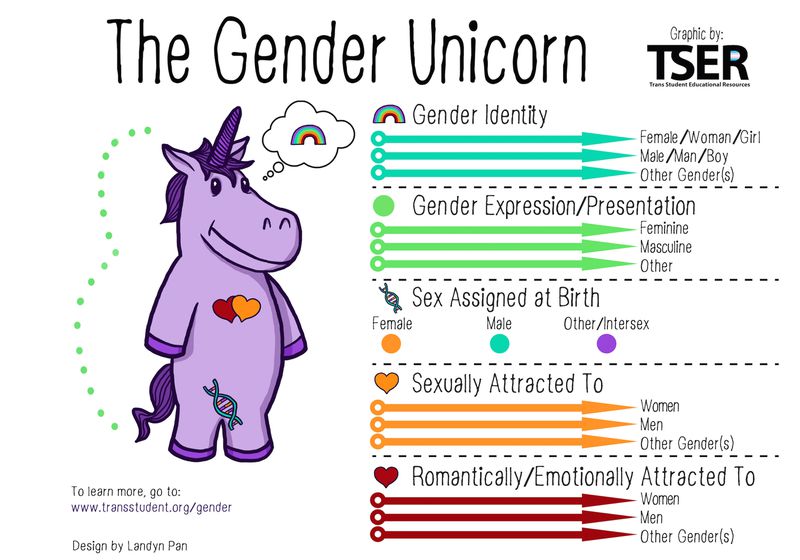 PerryUndem Research/Communication conducted the survey among n = 1,067 adults 18 and older nationwide, March 4 through 12, 2015. The survey was administered among a nationally representative sample of adults, using GfK's Knowledge Panel. The margin of error is +/- 4.1 percentage points. Some results do not add to 100 percentage points as a result of rounding. Topline results are available here.

Watch: How most states still discriminate against LGBT people