The big mistake lots of NFL teams make in the draft, according to economists

Share All sharing options for: The big mistake lots of NFL teams make in the draft, according to economists

In last year's NFL draft, the Buffalo Bills traded up from the eighth pick to the fourth to take receiver Sammy Watkins. To do so, they gave up their first pick this year, 19th overall.

Watkins has had a solid start to his career. But the receiver the Bills could've taken if they'd stayed put — Odell Beckham Jr. — was named Offensive Rookie of the Year and already looks to be a generational talent.

It's always easy to pick apart draft decisions in retrospect. But this mistake was utterly predictable — and it remains a mistake whether Watkins ends up a better player than Beckham or not.

A series of papers by economists Cade Massey and Richard Thaler has shown that at any given position, historically, the odds of the top player picked (Watkins) being better than the third player picked (Beckham) is just 55 percent or so.

"It's basically a coin flip," Massey, who serves as a draft consultant with several NFL teams, told me last year, "but teams are paying a great deal for the right to call which side of the coin."

Because teams just aren't that good at evaluating a player's chance of success, Massey and Thaler's analysis says in the current trade market, teams are better off trading down whenever they get an offer — that is, trading one high pick for multiple lower ones, in order to diversify risk. But many teams, like the Bills, become overconfident in their evaluation of one particular player and do the opposite: they package several slightly lower picks for the right to take one player very early.

Watch: The history of the NFL draft, explained in 2 minutes

It's just not worth it to trade up

In their first paper, Massey and Thaler studied 1,078 draft pick trades made between 1990 and 2008. This let them determine the value teams got in return when they traded away each pick in the first five rounds of the draft: 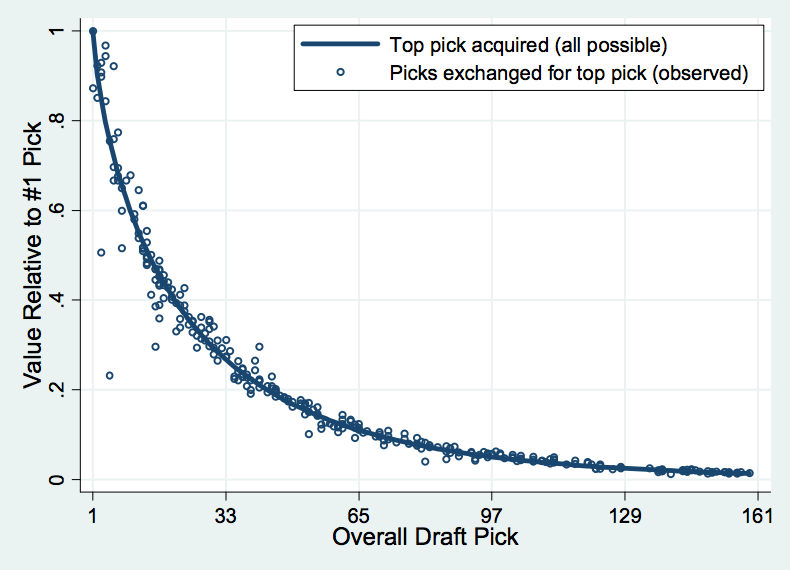 The most important thing about this graph: the curve is very, very sharp in the first round. That means teams think the very top picks are extremely valuable: the value of the 10th pick is only about half that of the first pick.

Now, it's worth pointing out that for years, most teams followed something called "the Chart," which assigned values to each pick in the draft for trade purposes. Since 2008, many teams have smartly stopped treating the Chart as gospel, and the curve has become slightly less steep.

But Massey says it still hasn't flattened out to anything near where it should be, in terms of the actual value derived from the players picked. He and Thaler calculated this value based on the odds that the first player picked at any given position will perform better — in terms of the number of games he starts in his first five seasons — than the second player drafted at that position.

Lots of teams, like the Bills, will trade up when they identify a player they prefer at a needed position: they need a wide receiver, and a few highly rated ones are available, but they trade up because they're certain Sammy Watkins is the best. But the data says that teams just aren't very good at figuring out when this is true.

On average, the chance that first player will start more games than the second one picked at his position: 52 percent. Compared with the third player, it's still only 55 percent, and compared with the fourth, it's just 56 percent.

These numbers suggest that moving up eight picks (the average distance between the first and second players at the same position) should cost a small amount, since you're only increasing the odds of a getting a more productive player by 4 percent or so. But as the steep curve shows, teams pay a ton to move up, especially at the top of the draft.

It really pays off to trade down 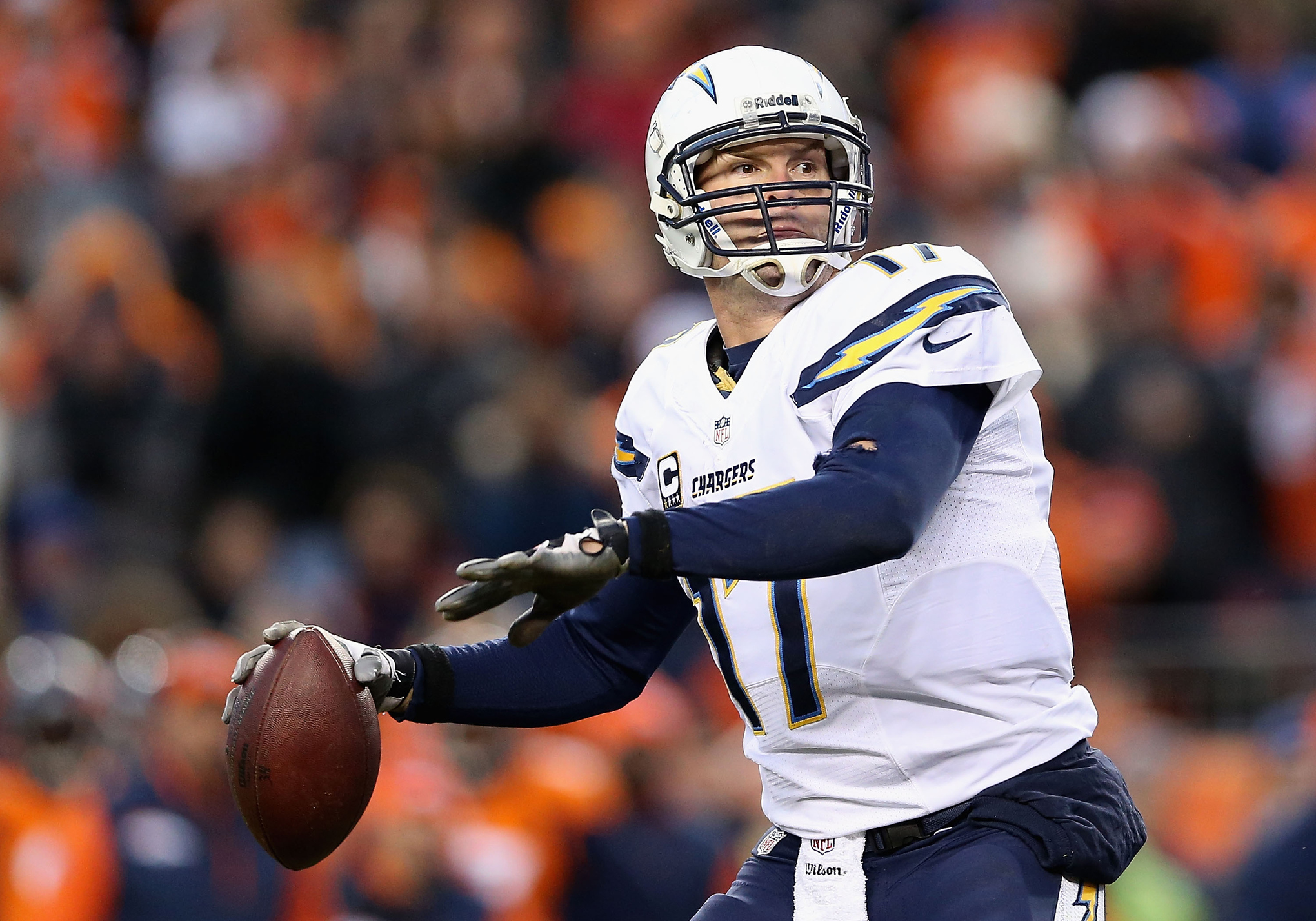 Given that some teams, like the Bills, are irrationally willing to pay a lot to trade up, smart teams can reap huge benefits by trading down. Even staying put and drafting from your original spot, the researchers' analysis shows, isn't the best strategy.

For each pick in the first round, Massey and Thaler calculated all of the different two-pick packages a team could've gotten by trading down, based on the historical data (a team with the first pick, for instance, could get the second and 181st picks, or the 14th and 15th picks, or any combination of picks in between that provide the same sum value).

Then they calculated what teams have gotten out of these picks, on average, in terms of the number of starts a player picked at that spot has historically provided in his first five years, and the number of Pro Bowls he's voted to. (They included Pro Bowls to counter the criticism that their analysis ignores the unique impact of superstar players only available in the first few picks.)

Again, the data was unequivocal. On average, trading down and getting two players gave a team five more starts per season and slightly more total Pro Bowls.

You could chalk this up to the simple fact that more players start more games, but it's more than that. Even if you imagined that the team trading down could only keep the better one of the two players it drafted, it'd still get slightly more total starts and the same number of Pro Bowls. The truth is that teams are imperfect talent evaluators, so having two later picks is better than a single early one. It's just risk diversification at work.

The most straightforward piece of proof for all this is the fact that trading down correlates with more wins on the field.

Massey and Thaler came to this conclusion by looking at the number of wins a team had in any given season between 1997 and 2008, and the total value of all picks they'd made in the previous four years (the amount of time, on average, for which a rookie is under contract).

They found that one standard deviation in pick value translated to 1.5 more wins per season on the field. Sure, it's a small sample size, and there's a lot of chance and other factors built into the system, such as a coach's strategy. But trading down correlates with a significant amount of victories, given that there are only 16 games in a season.

So why don't more NFL teams follow this advice? 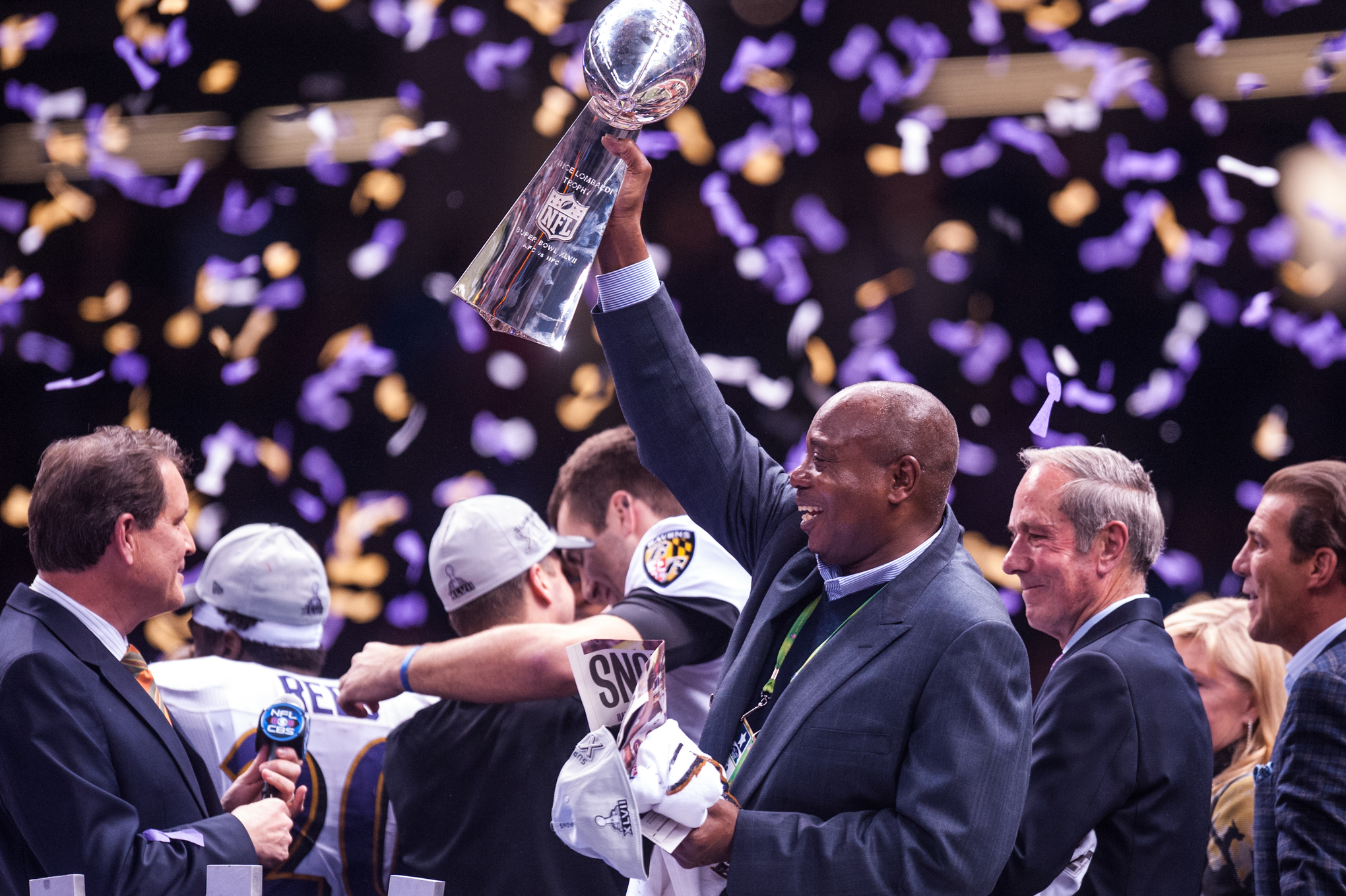 If all teams took note of these findings and corrected their behavior, the principles would no longer apply. Teams would be much less interested in trading up, so the lucrative market for trading down would evaporate.

Why hasn't this happened? One answer is a widely known psychological bias called the overconfidence effect. As people are given more information, the accuracy of their analysis often hits a ceiling, but their confidence in it continues to increase.

This tendency has been demonstrated in all sorts of areas, from bettors picking horses to psychologists making diagnoses. It's not hard to imagine that NFL general managers — who are given scouting reports on players that cover everything from their body fat percentage to their home life — fall victim to the same sort of overconfidence.

"[teams] fall in love with players, get more and more confident in their analysis"

"In my experience, teams always say they're on board with [trading down] in January," Massey said. "Then when April rolls around, and they've been preparing for the draft for a long time, they fall in love with players, get more and more confident in their analysis, and fall back into the same patterns."

There's also the fact that the sports world as a whole tends to glamorize superstars — leading many to disproportionately attribute a 53-player roster's success to one or two highly drafted players. For a struggling GM, it might seem easier to trade up and land a guaranteed superstar than to patiently fill a roster with competent players.

The problem, though, is that there are no guaranteed superstars — and Thaler and Massey have found that, given a long enough time frame, no teams are any better at accurately evaluating prospects than others. Sure, a GM might hit a hot streak over the course of a few drafts, but long term they estimate that 95 to 100 percent of the difference in teams' odds of striking gold with any one pick is driven by chance.

So the key isn't drafting better — it's just drafting more.

As Massey noted, there are a few teams out there following his philosophy. In a recent interview, Eric DeCosta — assistant GM of the perennially successful Baltimore Ravens — dropped a hint about the identity of one of them:

We look at the draft as, in some respects, a luck-driven process. The more picks you have, the more chances you have to get a good player. When we look at teams that draft well, it’s not necessarily that they’re drafting better than anybody else. It seems to be that they have more picks. There’s definitely a correlation between the amount of picks and drafting good players.