Everything you need to know about the White House Correspondents' Dinner

Share All sharing options for: Everything you need to know about the White House Correspondents' Dinner

White House correspondents are integral to reporting on President

The White House Correspondents' Association is the organization that represents the White House Press Corps, and is in charge of administrative matters like assigning seats to reporters during press conferences, deciding which news agencies get to use the workspace in the White House, and determining which media organizations are part of the corps and gain access to the president.

They are consulted about the composition and rotation of the White House press pool, the smaller group of journalists who travel with the president. The relationship between the WHCA and Donald Trump has been rocky because of Trump's contentious relationship with the press.

The WHCA is also in charge of organizing the annual White House Correspondents' Dinner. This year, Trump is skipping the dinner — he's the first president in 36 years to do so.

The history of the White House Correspondents Dinner

The White House Correspondents' Dinner (WHCD) is an event thrown by an organization called the White House Correspondents' Association (WHCA). The WHCA was initially founded in 1914 when Woodrow Wilson, displeased by the way he was being quoted in press conferences at the White House, threatened to cease giving them altogether. The group's formation didn't succeed in stopping him; Wilson eventually canceled regularly scheduled press conferences in 1915, and they weren't revived until Warren Harding, a newspaper publisher himself, took office in 1921.

... the trade journal Editor & Publisher said no president before him had such "mutually frank and satisfactory contacts with the reporters. The correspondents who controlled congressional press accreditation adopted a resolution that "no finer contact of genuine understand and sympathy ever was established between an American president and the newspapermen"

According to the WHCA, the first official WHCD was born out of Harding's relationship with the press. "One of his first acts as president had been throwing a dinner for the correspondents who had covered his campaign in Marion, Ohio. Now, it was time to reciprocate," National Journal's George Condon wrote, referring to how the WHCA intended to throw a dinner attended by the president.

Even though he had a good relationship with the press, Harding did not attend any of the three dinners held during his presidency. A number of his aides — including personal secretary George Christian and Secretary of Labor James Davis — attended the first dinner in his stead.

In 1924, President Calvin Coolidge became the first president ever to attend one of these dinners. "Every president since Calvin Coolidge has attended the dinner at least once during their time in office but in recent decades it’s become mandatory participation for the commander-in-chief," White House Corespondents Weekend Insider, a site dedicated solely to the dinner and events surrounding it, explains.

This year, President Donald Trump is skipping the ceremony. He will be the first president in 36 years to pass on the dinner and will instead hold his own rally.

What is the Gridiron Club?

The Gridiron Club is an organization composed primarily of DC's premier journalists and Washington bureau chiefs. The club has been hosting dinners since 1885, which feature live entertainment, jokes, and even satirical songs (not unlike the WHCD). The main difference is that the Gridiron party is very private, and cameras are not allowed. In 2013, a pool reporter was finally granted access to the club's dinner, which Chuck Lewis, the senior editor of Hearst News and president of the Gridiron Club at the time, said was a major concession.

What exactly happens at the White House Correspondents' Dinner?

The activities of WHCA dinners have changed over the years. They were initially started so the WHCA could do some organizational housekeeping, such as electing officers, but also included, to quote one 1921 attendee, "such fun as the Prohibition Era afforded." That "fun" wasn't unlike what you'd see from the Gridiron Club.

The WHCD nowadays is more akin to a roast. News organizations bring celebrities and other notables as guests to the dinner event. The president makes a few jokes (President Obama's jokes have centered on his name and his birth certificate), and then is usually followed by a comedian who gets to be a bit more glib and ruthless. The proceedings are broadcast on C-SPAN (in contrast to the Gridiron dinner, which bars cameras).

Here is President Obama's speech from the 2016 WHCD:

President Trump won't have a speech like that this year. He is skipping the ceremony, and will be the first president in 36 years to do so. Trump has had a contentious relationship with the press, consistently calling reporting on his administration and his sagging approval numbers "fake news."

The ceremony will go on without him, as comedian Hasan Minhaj will perform the quasi-roast.

The WHCD has been around for more than 80 years. Here are a few historical highlights of the WHCD:

The WHCD is essentially a roast

That's the intent. In the past few years the WHCD has centered on speeches by the president and a comedian that poke fun at the president, his opponents, and whoever else may be in the room. Some people (usually anyone who is not the president) laugh a bit harder than others. Here are three times the comedian delivered the laughs (some of them a little more uncomfortable than others):

2009: Wanda Sykes pokes fun at Michelle Obama on a royal faux pas. Michelle touched the Queen of England (who, protocols of etiquette have it, is NOT to be touched). Sykes says it was like the former first lady was patting the queen down as if she slid into home plate:

2011: Seth Meyers sent Donald Trump, then flirting with a presidential run, to the burn unit (this is really strange now that Trump is now president):

Why the WHCD is called "Nerd Prom"

People call the WHCD "Nerd Prom" because, more often than not, journalists are (or like to think of themselves as being) deeply nerdy, dorky, weird, wonky, etc. And the dinner gets a lot of them into one place, cleaned up and dressed pretty nicely — hence the prom description.

But there's a bit of a debate over the nickname and whether it still fits. Since 2009, there have been fewer nerds and more celebrities coming to the dinner. "It's time to concede that the White House Correspondents' Association dinner doesn't have much to do with the White House and its correspondents anymore," the Washington Post's Roxanne Roberts and Amy Argetsinger explained. "Forget about that cute, self-deprecating 'nerd prom' image — sorry, but nerds can't get into the parties anymore."

Why do celebrities go to the WHCD? Don't they have better things to do?

While celebrities have been attending at least since Barbra Streisand in 1993, President Obama has changed the game a bit and made the dinner more enticing to A-listers. Part of that has to do with the celebrity involvement in his campaigns — tastemakers like Anna Wintour, stars such as George Clooney, and producers like Harvey Weinstein supported Obama's presidential runs and raised his profile. In return, it brought many of them closer to the world of politics and Washington, DC.

Here's a Google chart examining the searches for "White House Correspondents' Dinner" over the past few years. What you'll notice is that the spikes got bigger (signifying more interest) and more interest was sustained once Obama came into office: 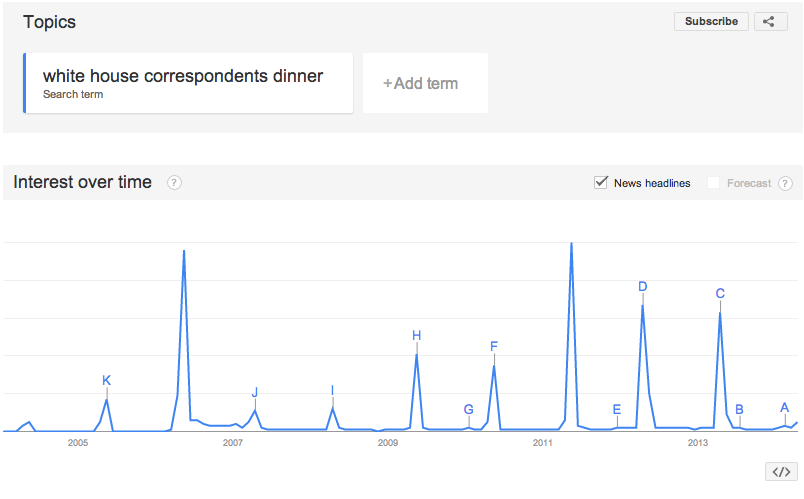 That giant spike in 2006 occurred on the heels of Stephen Colbert roasting George W. Bush, but that seems like an outlier. When Obama came into office, there's been more consistent and sustained search traffic.

What's the case against the White House Correspondents' Dinner?

The biggest criticism about the White House Correspondents' Dinner is that it blurs, or fully dissolves, the boundary between journalists and the president. The contention is: journalists should not be laughing and partying with someone they should be asking to answer hard questions.

The New York Times decided in 2007 that it would no longer participate. Frank Rich, a columnist for the Times at the time, wrote a scathing critique of the dinner, arguing that it is a symptom of a press failing to rigorously cover the president:

After last weekend’s correspondents’ dinner, The Times decided to end its participation in such events. But even were the dinner to vanish altogether, it remains but a yearly televised snapshot of the overall syndrome. The current White House, weakened as it is, can still establish story lines as fake as "Mission Accomplished" and get a free pass.

Dean Baquet, the current executive editor at the Times, told the New York Observer in 2011 that the dinner "had evolved into a very odd, celebrity-driven event that made it look like the press and government all shuck their adversarial roles for one night of the year, sing together (literally, by the way) … It just feels like it sends the wrong signal to our readers and viewers, like we are all in it together and it is all a game. It feels uncomfortable."

Baquet's observations were echoed by Tom Brokaw in 2012. Spurred by Lindsay Lohan's appearance at one of the dinners, Brokaw came out against the dinner. He told Politico that he wasn't pleased with what it had devolved into:

And I thought, ‘This is one of the issues that we have to address. What kind of image do we present to the rest of the country? Are we doing their business, or are we just a group of narcissists who are mostly interested in elevating our own profiles?' And what comes through the screen on C-SPAN that night is the latter, and not the former."

Some critiques are more blunt. Gawker's Hamilton Nolan called the event "the single most revolting annual gathering of pseudojournalistic cocksuckery in all the land."

In 2006, Stephen Colbert (in character) used the event itself to make many of these criticisms, arguing that White House correspondents weren't doing their job and that this jolly dinner was just adding to that. He said:

But, listen, let's review the rules. Here's how it works: the president makes decisions. He's the Decider. The press secretary announces those decisions, and you people of the press type those decisions down. Make, announce, type. Just put 'em through a spell check and go home. Get to know your family again. Make love to your wife. Write that novel you got kicking around in your head. You know, the one about the intrepid Washington reporter with the courage to stand up to the administration. You know - fiction!

That didn't go over well with the audience, who, for the most part, went silent as Colbert laid into them.

Some attendees think the concerns about the event are overblown. "As a former White House Correspondent, it’s really nice for people in politics and media to come together and have a little weekend of fun," MSNBC host Alex Wagner told Politico. "I understand the idea of the 'celebrification' of the event but I think it’s more of a testament to how interesting and compelling Washington politics is to the outside world."

Did Democrats blow it on Roe v. Wade?