Share All sharing options for: Obama's Catch-22 on climate change

On Wednesday, President Obama traveled down to the Florida Everglades to give a big Earth Day speech on global warming. And one of his key points was that climate change should, ideally, transcend partisan politics.

"This is not something that historically should be a partisan issue"

"This is not something that historically should be a partisan issue," Obama declared. After all, Republicans have placed a high priority on protecting the environment in the past. George H. W. Bush, he pointed out, was the "first president globally to acknowledge the impact of climate change."

It's a nice sentiment. The problem is, global warming has become a deeply rooted partisan issue over the past decade. And the bitter irony is that Obama's climate speeches only ever seem to exacerbate that divide — not narrow it.

Note: In this exit poll, about 60 percent of voters said climate change was a serious problem. 40 percent said it wasn't. (Vox)

"Climate change has become enmeshed in the so-called culture wars," writes Andrew Hoffman. "Acceptance of the scientific consensus is now seen as an alignment with liberal views consistent with other 'cultural' issues that divide the country (abortion, gun control, health care, and evolution)."

This has long posed a Catch-22 for Obama. It's harder to tackle global warming unless both parties can agree it's a problem that needs addressing. But anything the president says on the topic only ever seems to make that partisan split worse, not better. That's not because Obama is somehow uniquely unpersuasive. It's a persistent feature of modern American politics.

Why global warming has become so polarizing

There are plenty of hypotheses for why global warming has become so polarizing in the United States — more polarizing than it was in the early 1990s.

Some blame oil companies for sowing doubt about the science of climate change. Journalist Chris Mooney has suggested there may be something about conservatives' worldviews that makes them inherently inclined to distrust scientists more generally. Yale's Anthony Leiserowitz has argued that Al Gore may have helped deepen the partisan split when he became global warming's most high-profile champion in the 2000s.

Or here's another factor: psychologists have recently shown that people first think about potential solutions to global warming and then work backward to assess the problem itself. Climate advocates tend to argue that tackling global warming will require major government intervention: carbon pricing, clean energy support, public works for adaptation. But if the fix for global warming is lots of big government, then of course conservatives are going to be skeptical that it's an issue in need of urgent attention. 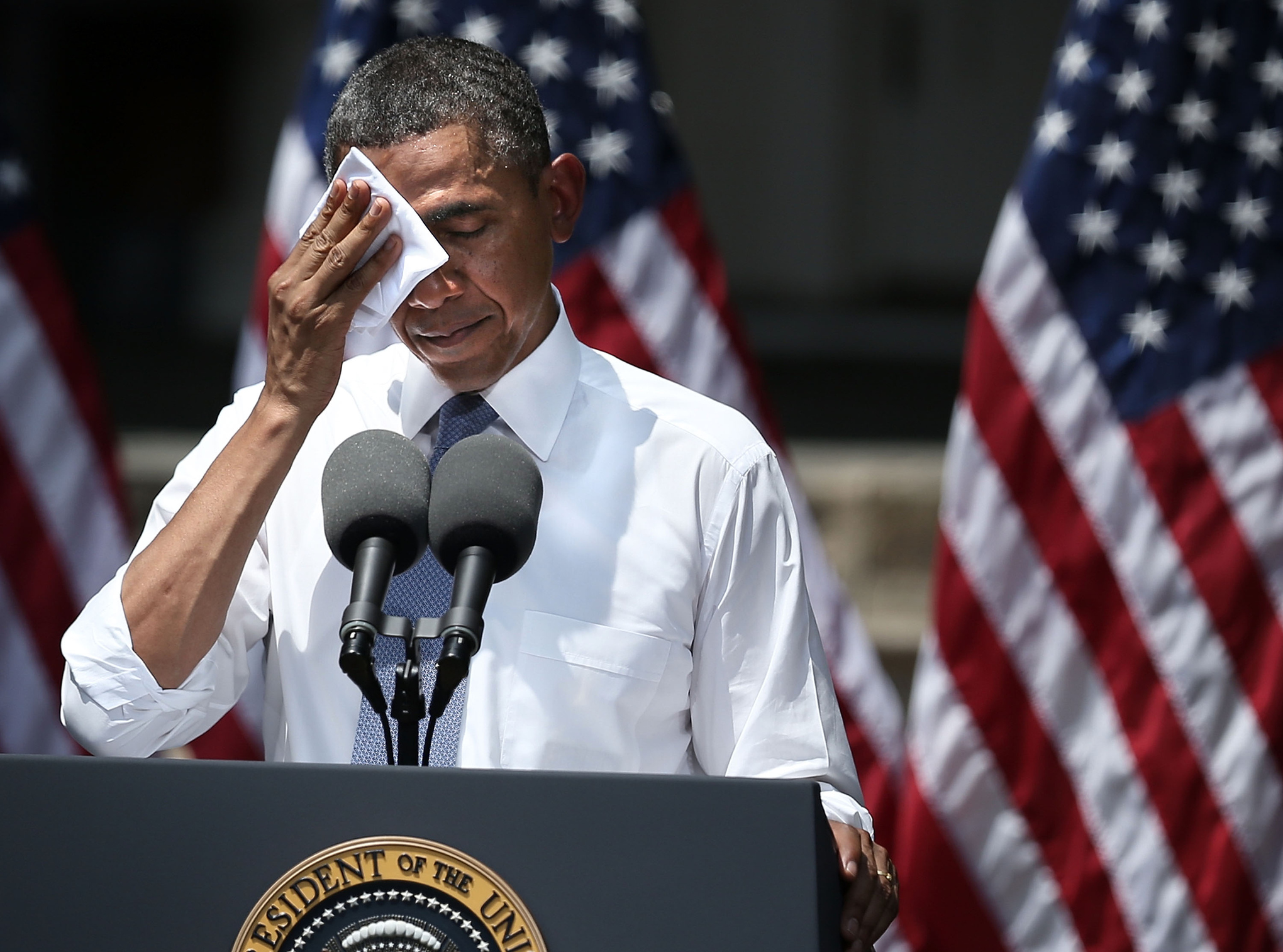 And whatever the cause of conservative skepticism, the past six years have shown that there's little President Obama can do or say to lessen it.

In his early years, Obama tried to push for a bipartisan climate-change bill — using essentially the same cap-and-trade program for carbon dioxide that John McCain proposed in the 2008 election. The result? Republican policymakers became even more bent on opposing climate action, not less. McCain himself came out against cap-and-trade. Newt Gingrich declared that he regretted ever cutting a 2007 ad with Nancy Pelosi supporting action on climate change. Global warming became more strongly identified as a Democratic issue — an Obama issue. And Republicans backed away.

Political scientists George Edward and Frances Lee have found that this is actually a consistent pattern in modern American politics. Whenever any president uses the bully pulpit to advocate for an issue, he rallies support within his own party but pushes the other party away. This was true of Clinton. It was true of Bush. It's true of Obama. Here's my colleague Ezra Klein on this research:

In more recent times, the Obama administration seems to have taken this lesson to heart. See Jonathan Chait's interview with outgoing aide Dan Pfeiffer, who basically suggests that the White House has all but given up on trying to appeal to the GOP.

Indeed, on climate, Obama now seems to be adopting a more pugnacious approach. In his Everglades speech, he took a jab at Florida Governor Rick Scott, who has reportedly stifled public officials from discussing global warming. "Climate change can no longer be denied," Obama said. "It can't be edited out. It can't be omitted from the conversation."

What does this new strategy accomplish? Taking the offensive might energize supporters. Or maybe it will push Republicans into a fight where they have a disadvantage, giving Democrats a political edge. (Polls suggest that most voters, though not all, disapprove of climate denial.) It's very unlikely to overcome partisan gridlock over climate. But then again, the upshot of Lee's and Edwards's work is that that's true of just about anything Obama could say.

Why the partisan divide on climate matters

This all raises a follow-up question: does it even matter if there's this large, intractable partisan gulf over climate change?

In the short term, maybe not. Right now the vast majority of Obama's policies to tackle global warming are being carried out through the executive branch. He doesn't need a single Republican in Congress if he wants to tighten fuel economy standards for cars and light trucks or impose new carbon-dioxide limits on coal-fired power plants through the EPA.

But the split could matter in other, more subtle ways. As Politico's Michael Grunwald points out, the White House has been highlighting how climate change and sea-level rise threaten Florida's Everglades, perhaps as a way to put pressure on Florida Republicans. It's an accurate point. But climate change also isn't the only threat facing the Everglades: there's also development and a century's worth of ill-conceived projects by the Army Corps of Engineers. Grunwald's worry is that White House efforts to put this problem into a contentious climate framework could make ongoing efforts to restore the Everglades even more polarizing than they already are.

Then there's the long run to consider. Obama doesn't need Republicans to care about climate change in order to tackle carbon emissions over the next two years. But he's not going to be president forever. And in the decades to come, it's much harder to see how global warming gets addressed — at least on the federal level — unless conservatives eventually get on board.

The question of how to defuse partisan tensions over climate change is an incredibly difficult one. Here's a look at one possible strategy, though note that one conceivable answer might simply be "it's impossible." But the clear lesson of the last six years is that it's unlikely to happen in the next two.

Further reading: Over at Grist, David Roberts has written a fair bit on the difficulties of bridging the liberal-conservative split on climate. This post is a good place to start (and includes links to past pieces).