The homicide of Freddie Gray: 6 Baltimore police officers on trial

Share All sharing options for: The homicide of Freddie Gray: 6 Baltimore police officers on trial

On Wednesday, hearings began in the trials of six Baltimore police officers accused of killing Freddie Gray. The case is a very big deal: It's the most high-profile attempt at holding police legally accountable for a black man's death since the police shooting of Michael Brown in Ferguson, Missouri, led to nationwide protests over cops' use of force.

The hearings on Wednesday focused on how the trial should proceed. The judge made three major decisions: Each of the six police officers will be tried separately, the charges against the cops won't be dismissed at this point in the trial, and Baltimore City State Attorney Marilyn Mosby will stay on the case despite accusations of bias. The case will now proceed into six trials, which could result in decades of prison time for the officers if they are convicted.

The case draws from a long and sometimes brutal history of policing in Baltimore — which is exemplified not just in Gray's death, but in dozens of other examples from the city's past. But Gray's death put these issues in the national spotlight, leading to protests and riots as demonstrators called for an end to racial disparities in the criminal justice system.

Freddie Gray suffered a fatal spinal cord injury on April 12, when he was tossed around in the back of a police van without a seatbelt fastened. He died a week later, in a death deemed a homicide by a medical examiner.

Baltimore police have a particularly bad history with brutality. A September 2014 report by the Baltimore Sun's Mark Puente, for example, found that the city had paid about $5.7 million since 2011 to more than 100 people — most of whom were black — who claimed officers beat them up. Police didn't admit fault in the cases, and the local union said the high cost was meant to avoid steeper costs from expensive lawsuits, according to CNN's Holly Yan, Ashley Fantz, and Kimberly Hutcherson.

The charges against the police officers involved in Freddie Gray's death

Here's the full list of the criminal charges, taken from a release handed out by the state attorney's office:

Protests over Gray's death were very heated, leading to some rioting

As the investigation into Gray's death dragged on for weeks, public anger rose against what many saw as an attempt by the city government and police department to cover up what happened to Gray.

Some of the protests were particularly tense, breaking out into riots. On April 25, after hours of large, peaceful demonstrations, some protesters began smashing car and business windows and looting stores. At one point, police briefly closed off the Camden Yards baseball stadium, keeping people at the Baltimore Orioles/Boston Red Sox game stuck inside until police gave the all-clear.

Riots broke out on April 27, when demonstrators looted, burned 144 vehicles and 15 buildings, and threw bricks, bottles, and other objects at police, injuring at least 20 officers. Police responded by trying to contain the crowds with tear gas, pepper spray, and other nonlethal weapons. Mayor Stephanie Rawlings-Blake also imposed a citywide, 10 pm curfew for less than one week, and Maryland Gov. Larry Hogan temporarily enlisted the state's National Guard to contain the violence.

All out war between kids and police pic.twitter.com/19y4YJ2Y5X

A police car and van burned on the streets of Baltimore. #BaltimoreRiots pic.twitter.com/Q4k6W9oQLK

It's common for the public and leaders to dismiss these types of violent outbursts as senseless. President Barack Obama, for example, described the rioters as "criminals and thugs" who were taking advantage of the tense situation in Baltimore. "They're destroying and undermining opportunities and businesses in their own communities," he said.

But historians and experts say these types of outbursts are rooted in legitimate anger toward a system that has in many ways failed them. "People participate in this type of event for a real reason," Darnell Hunt, a UCLA professor who's studied the 1992 Rodney King riots in Los Angeles, said. "It's not just people taking advantage. It's not just anger and frustration at the immediate or proximate cause. It's always some underlying issues."

Related Riots are destructive, dangerous, and scary — but can lead to serious social reforms In West Baltimore, some residents see rioting as a rational response to daily despair

In Baltimore, the anger was aimed not just at the questions surrounding Gray's death and a police department that has been subject to allegations of brutality in the past, but at widespread economic disparities that have left neighborhoods such as Freddie Gray's with populations of which more than half the residents don't have jobs. Residents weren't lashing out in violence just to take advantage of the situation — they were unleashing anger that's long existed in these communities.

"I was one of the ones who started the peaceful protests … the first seven days [after Gray's death], when it was fine and dandy," William Stewart, a West Baltimore resident who didn't participate in the riots, told Vox's Jenée Desmond-Harris. "I walked about 101 miles in peace. But if you protest peacefully, they don't give a shit."

Police are much more likely to kill black suspects 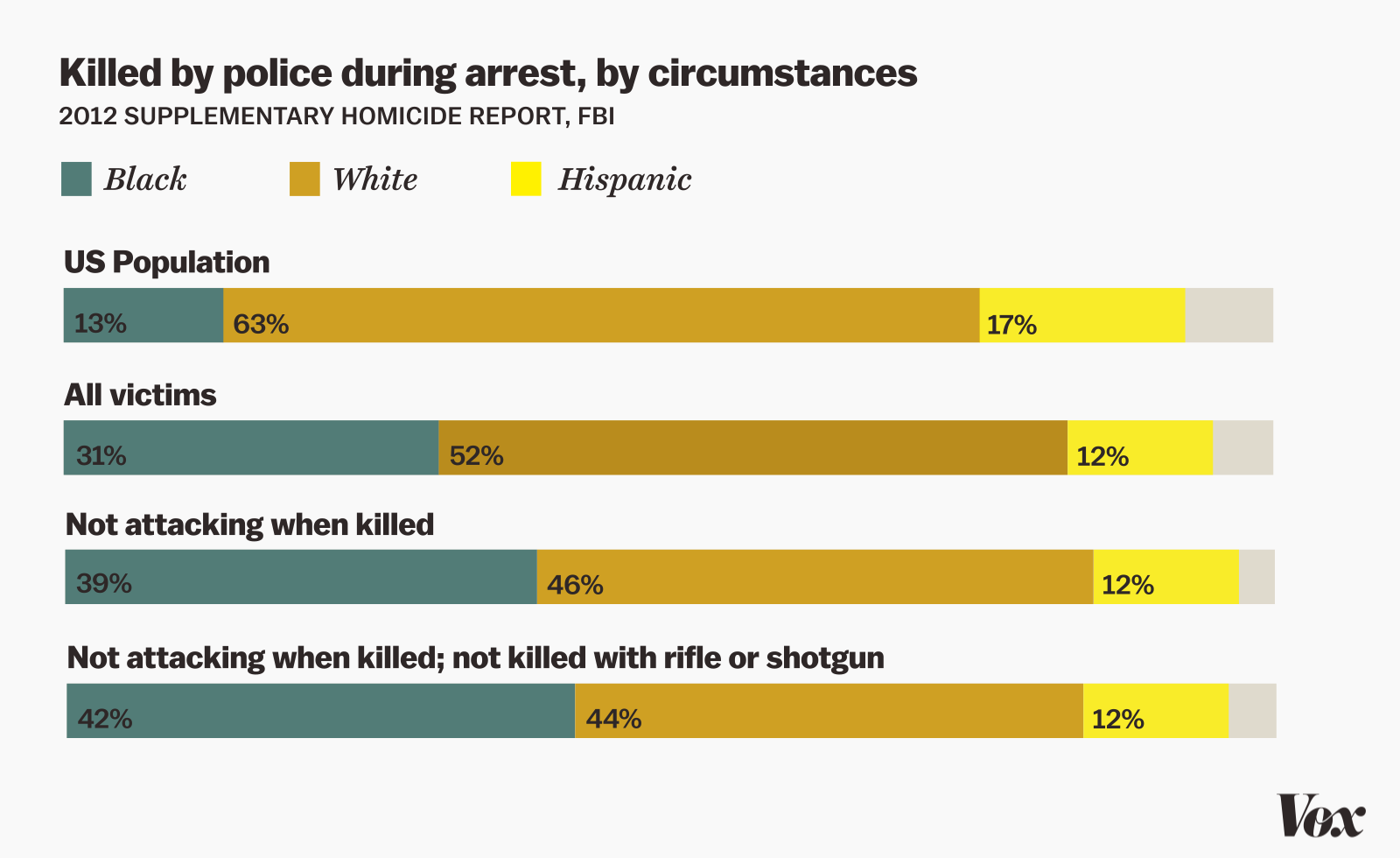 An analysis of the available FBI data by Vox's Dara Lind shows that US police kill black people at disproportionate rates: Black people accounted for 31 percent of police shooting victims in 2012, even though they made up just 13 percent of the US population. Although the data is incomplete, since it's based on voluntary reports from police agencies around the country, it highlights the vast disparities in how police use force.

Black teens were 21 times as likely as white teens to be shot and killed by police between 2010 and 2012, according to a ProPublica analysis of the FBI data. ProPublica reported: "One way of appreciating that stark disparity, ProPublica's analysis shows, is to calculate how many more whites over those three years would have had to have been killed for them to have been at equal risk. The number is jarring — 185, more than one per week."

There were several high-profile police killings in the past year involving black men and boys. In Ferguson, Darren Wilson killed Michael Brown, an unarmed black 18-year-old, triggering nationwide protests. In North Charleston, South Carolina, Michael Slager was charged with murder and fired from the police department after shooting Walter Scott, who was fleeing and unarmed at the time. In Ohio, police killed 22-year-old John Crawford and 12-year-old Tamir Rice in separate shootings after mistaking toy guns for actual weapons. In New York City, NYPD officer Daniel Pantaleo killed Eric Garner by putting the unarmed 43-year-old black man in a chokehold.

13 things you should know about the Michael Brown shooting

Police are rarely charged and prosecuted for use of force

The criminal charges against the police officers involved in Freddie Gray's death are surprising because police are very rarely prosecuted for using deadly force — and not just because the law allows them wide latitude to use force on the job. Sometimes the investigations fall onto the same police department the officer is from — as is the case in Gray's death — which creates a major conflict of interest. Other times, the best evidence comes from eyewitnesses, who can be notoriously unreliable and may be viewed as less trustworthy in the public eye than a police officer.

If police are charged, they're very rarely convicted. The National Police Misconduct Reporting Project analyzed 3,238 criminal cases against police officers from April 2009 through December 2010. They found that only 33 percent were convicted, and only 36 percent of officers who were convicted ended up serving prison sentences. Both of those are about half the rate at which members of the public are convicted or incarcerated.

To protesters, holding police accountable with charges and convictions is important not just to punish some officers for wrongdoing — but to send a message to all police departments that brutality and excessive use of force won't be legally tolerated.

But the numbers suggest that it would be a truly rare situation if the officers involved in Gray's arrest were convicted of a crime. And without a conviction, it's likely tensions will remain high — which is why the trial is so important.

Watch: Why filming the police is so important