What we know about the police shooting of Eric Harris in Tulsa County, Oklahoma

Share All sharing options for: What we know about the police shooting of Eric Harris in Tulsa County, Oklahoma

A white reserve deputy in Tulsa County, Oklahoma, who shot and killed an unarmed black man has been charged with second-degree manslaughter — and now the Tulsa County Sheriff's Office is conducting an internal investigation following accusations that the deputy's training records were falsified to give him credit for field training and firearms certification he didn't earn.

Robert Bates, the 73-year-old Tulsa County reserve deputy, shot Eric Harris, 44, during an April 2 sting operation in which officers recorded Harris attempting to illegally sell a gun to police. In video footage released April 10, it appears Bates meant to use his stun gun on Harris, warning deputies that he was going to use his Taser before firing a shot from his actual gun. Immediately after firing, he shouted, "I shot him! I'm sorry!"

The shooting led to questions about Bates's qualifications as a reserve deputy and corruption within the Tulsa County Sheriff's Office. Anonymous sources told Tulsa World's Dylan Goforth and Ziva Branstetter that supervisors at the sheriff's office were ordered to falsify Bates's records — and those who didn't comply with the orders were transferred from their positions. Those allegations came after the discovery by Tulsa World's Goforth that Bates, an insurance executive, had donated equipment to the police force, leading to criticisms that the reserve deputy had essentially bought his way into the sheriff's program.

The shooting also follows several police killings over the past year, including the deaths of Michael Brown in Ferguson, Missouri, and Eric Garner in New York City, that led to nationwide protests over racial disparities in police use of force and the criminal justice system. But it's rare that these cases lead to charges, as the Harris shooting did, in large part because police are given wide latitude to use force under the law.

(Warning: graphic footage of the shooting)

The video footage shows Harris fleeing after police caught him illegally selling firearms during a sting operation. Police eventually grabbed Harris and pinned him down.

Bates yelled that he was going to use his Taser, before he fired a single shot from his actual gun. Immediately after firing, Bates shouted, "I shot him! I'm sorry!" Harris then exclaimed, "He shot me. He shot me. Oh my god. I'm losing my breath." Police officers responded, "You shouldn't have fucking ran!" and "Fuck your breath!"

Bates isn't an active member of the police force, Tulsa World's Goforth reported. He's an insurance executive who volunteers during his free time as a reserve deputy, which is made up of about 130 people total. Many of the people in the reserve, including Bates, also donate equipment to the sheriff's office, including guns, stun guns, vehicles, and even the sunglasses cameras that recorded the shooting.

Reserve deputies are divided into three categories, according to Tulsa World: basic, intermediate, and advanced. The sheriff's office claimed Bates was considered advanced, meaning he can do practically anything a full-time deputy can do. Still, the sheriff's office acknowledged to Tulsa World that even an advanced reserve deputy would normally be at an undercover operation in more of a support role — taking notes and doing countersurveillance, for example.

Oklahoma prosecutors are investigating the shooting. Tulsa County District Attorney Steve Kunzweiler announced on April 13 that Bates was being charged with second-degree manslaughter involving culpable negligence, Tulsa World's Kevin Canfield reported. "Oklahoma law defines culpable negligence as 'the omission to do something which a reasonably careful person would do, or the lack of the usual ordinary care and caution in the performance of an act usually and ordinarily exercised by a person under similar circumstances and conditions,'" Kunzweiler explained in a statement.

The Tulsa County Sheriff's Office is also conducting an internal investigation into the reserve deputy program.

Police are much more likely to shoot and kill black suspects 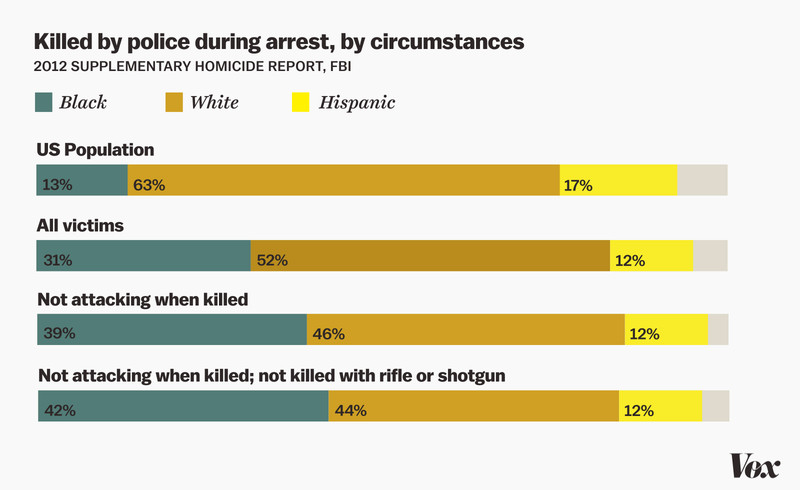 An analysis of the available FBI data by Vox's Dara Lind shows that US police kill black people at disproportionate rates: black people accounted for 31 percent of police shooting victims in 2012, even though they made up just 13 percent of the US population. Although the data is incomplete, since it's based on voluntary reports from police agencies around the country, it highlights the vast disparities in how police use force.

Police were 21 times more likely to shoot and kill black teens than white teens between 2010 and 2012, according to a ProPublica analysis of the FBI data. ProPublica reported: "One way of appreciating that stark disparity, ProPublica's analysis shows, is to calculate how many more whites over those three years would have had to have been killed for them to have been at equal risk. The number is jarring — 185, more than one per week."

There were several high-profile police killings in the past year involving black men and boys. In North Charleston, South Carolina, Michael Slager was charged with murder and fired from the police department after shooting Walter Scott, who was fleeing and unarmed at the time. In Ferguson, Darren Wilson killed 18-year-old Michael Brown in a highly contentious shooting that sparked nationwide protests. In Ohio, police killed 22-year-old John Crawford and 12-year-old Tamir Rice in separate shootings after mistaking toy guns for actual weapons. In New York City, NYPD officer Daniel Pantaleo killed Eric Garner by putting the unarmed 43-year-old black man in a chokehold.

What are the Ferguson protests about?

Cops can legally shoot when they reasonably perceive a threat

Constitutionally, "police officers are allowed to shoot under two circumstances," David Klinger, a University of Missouri St. Louis professor who studies law enforcement officers' use of force, said in August. The first circumstance is "to protect their life or the life of another innocent party" — referred to as the "defense-of-life" standard by police departments. The second circumstance is to prevent a suspect from escaping, but only if the officer has probable cause to think the suspect poses a dangerous threat to others.

The logic behind the second circumstance, Klinger explained, comes from Tennessee v. Garner. That case involved a pair of police officers who shot a 15-year-old boy as he fled from a burglary. (He'd stolen $10 and a purse from a house.) The court ruled that cops couldn't shoot every felon who tried to escape. But as Klinger said, "They basically say that the job of a cop is to protect people from violence, and if you've got a violent person who's fleeing, you can shoot them to stop their flight."

The key to both of the legal standards — defense of life and stopping a fleeing violent felon — is that it doesn't matter whether there is an actual threat when force is used. Instead, what matters is the officer's "objectively reasonable" belief that there is a threat.

That standard comes from the other Supreme Court case that guides use-of-force decisions: Graham v. Connor. This was a civil lawsuit brought by a man who survived his encounter with police officers but was treated roughly, had his face shoved into the hood of a car, and broke his foot — all while suffering a diabetic attack. The court didn't rule on whether the officers' actions had been justified, but said police couldn't justify their conduct solely based on whether their intentions were good. They had to demonstrate that their actions were "objectively reasonable," given the circumstances and compared with what other police officers might do.

What's "objectively reasonable" changes as the circumstances change. "One can't just say, 'Because I could use deadly force 10 seconds ago, that means I can use deadly force again now,'" Walter Katz, a California attorney who specializes in oversight of law enforcement agencies, said in August.

In general, officers are given lot of legal room to use force without fear of punishment. The intention behind these legal standards is to give police officers leeway to make split-second decisions to protect themselves and bystanders. And although critics argue that these legal standards give law enforcement a license to kill innocent or unarmed people, police officers say they are essential to their safety.

In the case of Harris, the legal question is whether Bates had good reason to believe Harris posed a physical threat to him or others when he fired the final shots.

Police are rarely charged and prosecuted for shootings

The charges against Bates are surprising because police are very rarely prosecuted for shootings — and not just because the law allows them wide latitude to use force on the job. Sometimes the investigations fall onto the same police department the officer is from, which creates major conflicts of interest. Other times the only available evidence comes from eyewitnesses, who may be viewed as less trustworthy in the public eye than a police officer. 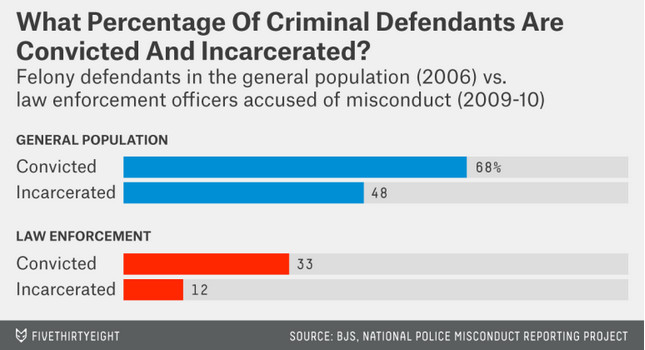 A couple of factors might explain why charges were brought against the Oklahoma deputy for Harris's death. The shooting was caught on tape, something that has been integral in inspiring public outrage over police use-of-force incidents since the Rodney King beating more than 20 years ago. In the recording, Bates almost immediately acknowledged and apologized for his mistake, suggesting he meant to use his Taser instead. Under Oklahoma law, that could be taken as an admission of culpable negligence, which would justify a second-degree manslaughter charge.

Watch: Why filming the police is so important