President Barack Obama on Saturday called for the restoration of the Voting Rights Act of 1965, which the Supreme Court significantly weakened in 2013.

The Supreme Court's decision in Shelby County v. Holder helped usher in a new wave of voter ID laws and other restrictions that disproportionately impact minority voters and make it more difficult to vote. Obama took at these laws Saturday, which many critics have compared to state-level measures, such as poll taxes and literacy tests, that made it difficult and even impossible for African Americans to vote prior to the Voting Rights Act.

"The Voting Rights Act was one of the crowning achievements of our democracy — the result of Republican and Democratic efforts," Obama said. "One-hundred members of Congress have come here today to honor people who were willing to die for the right to protect it. If we want to honor this day, let that hundred go back to Washington, and gather 400 more, and together, pledge to make it their mission to restore that law this year."

How the Voting Rights Act changed the US electorate

The Voting Right Act had a huge impact on many southern states. For example, black voter registration rates in Mississippi increased from a mere 6.7 percent in 1965 to 59.8 percent in 1967, according to the US Commission for Civil Rights. For a state that's historically around 40 percent black, this represented a massive shift in politics — a change that much of the predominantly white leadership at the time feared but would have to accept due to the Voting Rights Act.

But the landmark legislation didn't immediately dissolve all voting disparities. In 1967, there was still a roughly 32-point gap between black and white voter registration rates in Mississippi. 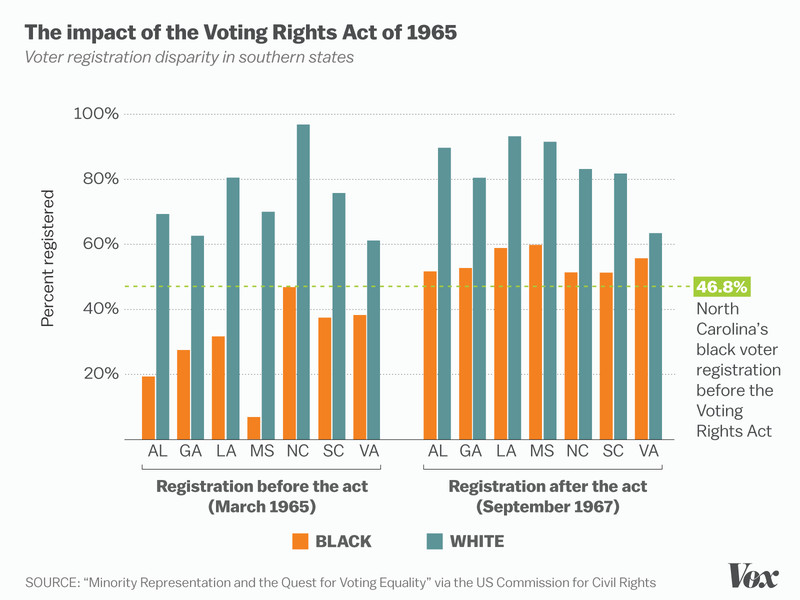 But Obama and other critics of the Supreme Court's 2013 decision worry that voter ID laws and other restrictions will reverse these voting demographic trends. Without the full power of the Voting Rights Act, the federal government may not be able to stop new laws that make it harder for black, Hispanic, and other minority citizens to vote.