Study: More than half of people killed by police aren’t counted by the FBI

Share All sharing options for: Study: More than half of people killed by police aren’t counted by the FBI

Different federal tallies under-counted the number of people killed by police by more than half from 2003 to 2009 and 2011, according to a new analysis released on March 3 by the Bureau of Justice Statistics (BJS).

ARD captured approximately 49 percent of people killed by police, while SHR captured 46 percent, according to the analysis. Neither system picked up about 28 percent of law enforcement homicides in the US, the analysis concluded, meaning more than one quarter of police-caused deaths aren't tracked at all under ARD or SHR.

Criminal justice experts have long known that these measures are flawed. ARD collects police-caused homicides data through state reporting coordinators, but the methods of collecting data can greatly vary from state to state, often depend on differing access to technology, and sometimes don't directly involve police departments or coroner's offices. SHR relies on reports submitted by police agencies, but these reports are voluntary — and some states, like Florida, don't participate.

Researchers at RTI International, which conducted the analysis for BJS, put together a Venn diagram to show which deaths are picked up by ARD, SHR, both, and neither. The researchers estimated more than 7,400 people were killed by police between 2003 to 2009 and 2011, or more than 900 deaths to law enforcement on average each year. 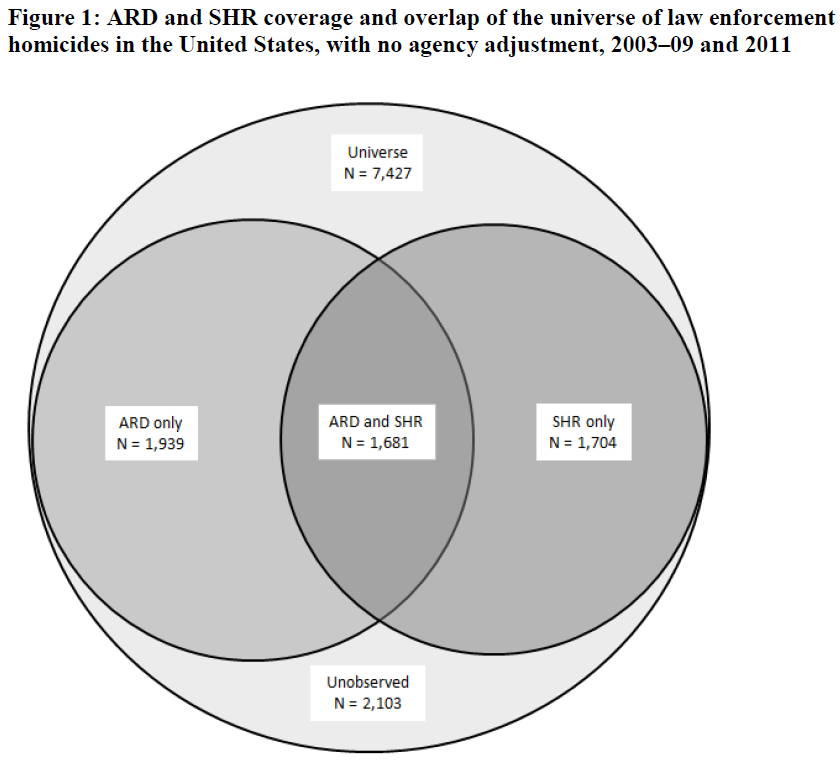 Not all of these homicides are unjustified, John Roman, senior fellow at the Urban Institute's Justice Policy Center, said. It's possible that in many of these cases police responded with force legitimately, perhaps when a suspect threatened the officers or others.

The fact that even both measures combined still miss 28 percent of police-caused deaths is a sign of just how incomplete these tallies are. The data's flaws make it difficult, if not impossible, to know the actual level of racial disparities in police use of force, which became a topic of national discussion following the police shooting death of Michael Brown in Ferguson, Missouri, last August.

"The available data (FBI, Vital Stats, BJS) are worse than miserable," David Klinger, a criminologist at the University of Missouri in St. Louis, wrote in an email to me last month. "They suck and no one should do any sort of analysis with them beyond using them to say that we have some floor [regarding] shootings and perhaps note that there are all sorts of circumstances involved when shootings occur."

"The troubling reality is that we lack the ability right now to comprehensively track the number of incidents of either uses of force directed at police officers or uses of force by police," Holder said, according to The Hill. "This strikes many — including me — as unacceptable."