The US only has two polar icebreakers. That's a problem if the Arctic keeps melting.

Share All sharing options for: The US only has two polar icebreakers. That's a problem if the Arctic keeps melting.

Here's one unexpected consequence of global warming: As the planet gets hotter and the frozen Arctic keeps melting, the United States may end up needing more icebreakers.

In a recent policy brief, Shiva Polefka, an analyst at the Center for American Progress, made the case that the US Coast Guard was woefully short of polar icebreakers and unprepared for a warmer Arctic, where it would have to deal with everything from oil spills to stranded ships. For now, the US government owns just two working Arctic-capable icebreakers — far fewer than Russia or Canada: 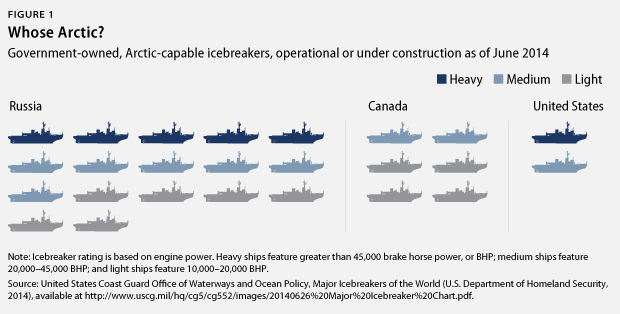 In recent years, politicians in Alaska have been warning about this very problem. "Without access to heavy icebreakers, we will be unable to adapt to historic changes in the Arctic," Rep. Don Young (R-AK) has said.

So is there really a dire icebreaker gap? Or is this all overblown?

As the world warms, the US Coast Guard will have to deal with a busier Arctic

Salvage teams conduct an assessment of Shell's Kulluk drill barge on January 9, 2013, in Kodiak Island's Kiliuda Bay in Alaska. An oil rig that ran aground in Alaska has been refloated and is being towed to a nearby harbor, with no signs of pollution seen, officials said on January 7. (TIM AUBRY/AFP/Getty Images)

Back when the Arctic Ocean was covered in ice year-round, this wasn't an issue. Hardly anyone was looking for oil or navigating ships up in this forbidding region. So the US Coast Guard didn't have much to do here.

But that's now changing. The Arctic is heating up faster than any region on Earth, and the extent of sea ice has been declining 3 to 4 percent per decade since 1979. In the summer months, especially, the Arctic Ocean is opening up: 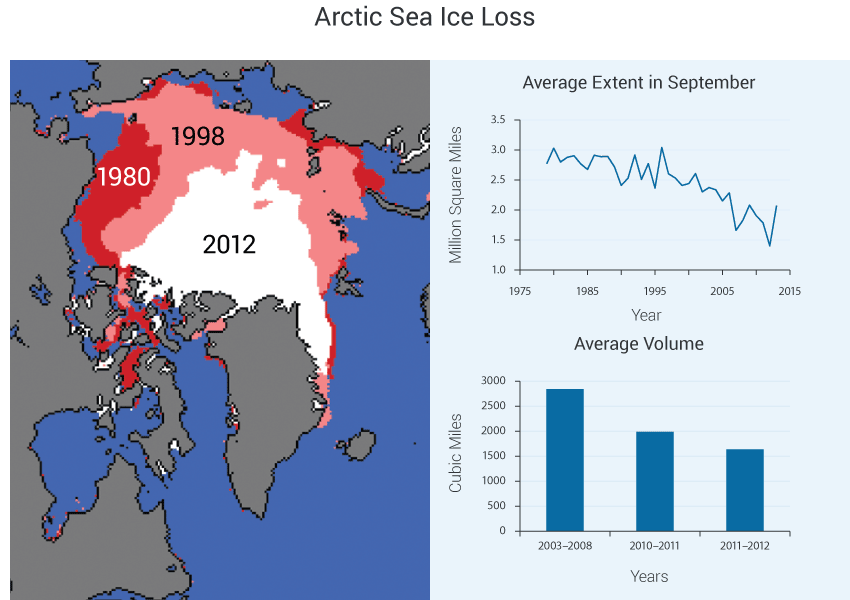 Suddenly, lots of companies — and countries — are moving in. Royal Dutch Shell is pursuing oil and gas exploration in the Beaufort and Chukchi Seas north of Alaska. (Shell's first exploratory drilling campaign in 2012 ended in disaster, but the Interior Department is expected to approve further forays this summer.) Arctic fishing and shipping are also expanding, with 53 ships traversing Russia's Arctic last summer.

If that traffic keeps growing, it could mean lots of extra work for the US Coast Guard, which is legally tasked with enforcing fishing and maritime laws and helping ships in distress.

The Coast Guard is also, crucially, responsible for handling the emergency response to any offshore oil spills. Shell, for one, is hoping to complete permanent oil platforms in Alaska's Chukchi Sea by the 2020s. If that happens, the Coast Guard will have to be able to conduct year-round emergency and spill response in icy and treacherous conditions. And that's where icebreakers come in.

"Today, winter sea ice now forms and recedes over a much larger proportion of the Arctic Ocean," Polefka notes. "In addition, loose icebergs and pack ice can be quickly transported long distances and jam into thick ridges and treacherous, hull-crushing floes."

Currently, the US has limited capacity to move through this ice. The country's only functional heavy icebreaker — the US Coast Guard Cutter Polar Star — was commissioned in 1976, recently went through major repairs, and will likely only last until 2020 or so. Another heavy icebreaker, the Polar Sea, has been disabled and sitting in a Seattle port since 2010.* Both are past their originally intended lifespan. (There's also a smaller operational icebreaker, Healy, but that's mostly used for supporting scientific research.)

Meanwhile, back in 2013, the Department of Homeland Security suggested it would potentially need at least six icebreakers in the coming years "to adequately meet mission demands in the high latitudes." (That's three heavy icebreakers, three medium.) The Coast Guard requested a new icebreaker in its FY2013 budget, but that proposal has largely languished in Congress.

But are more icebreakers really necessary? 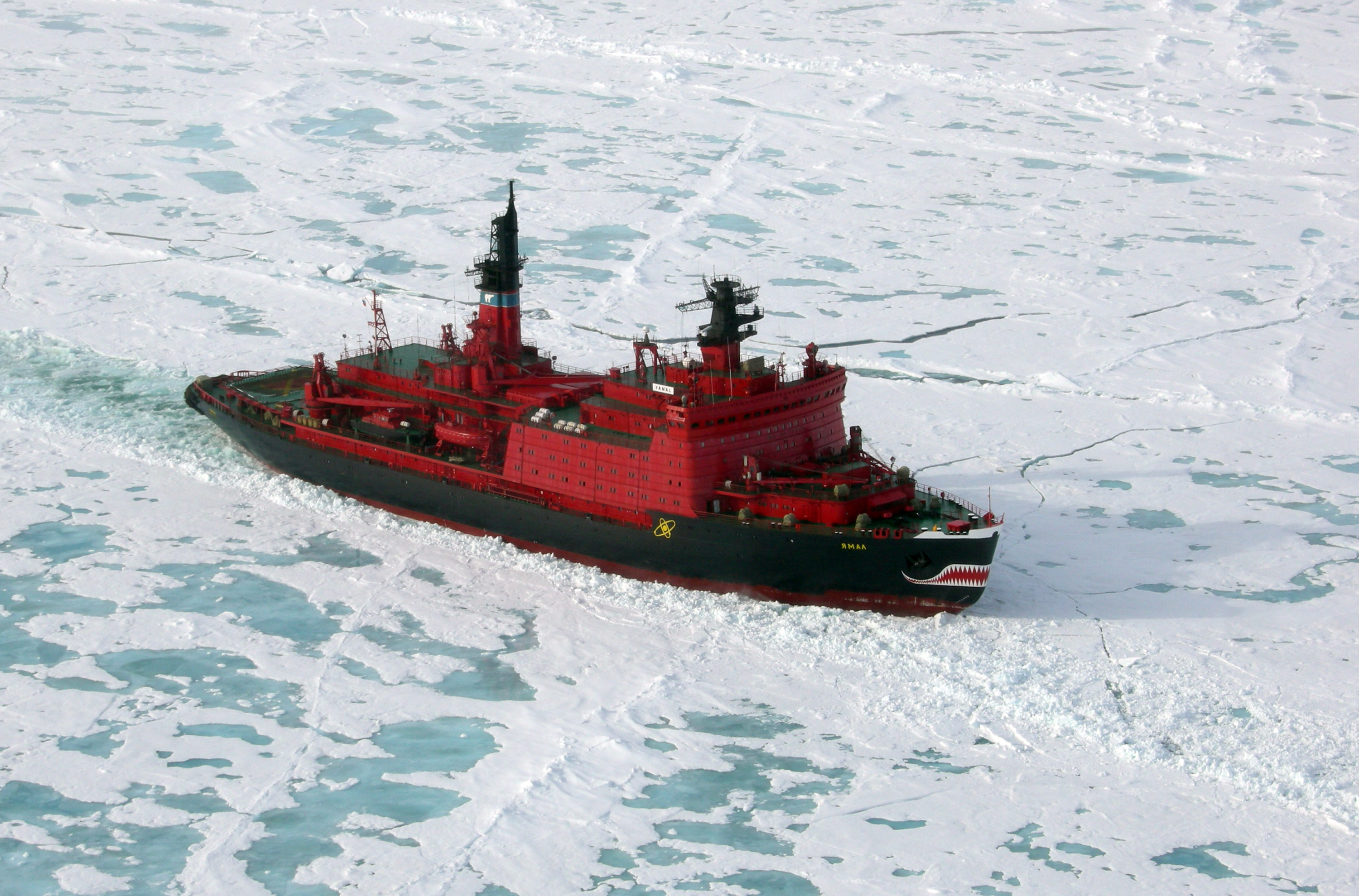 A Russian nuclear powered icebreaker Yamal traveling through the Arctic Ocean on its way to the North Pole. (Photo by Nery Ynclan/NBC/NBCU Photo Bank via Getty Images)

That said, there's room to wonder whether the need for icebreakers will really grow so fast in the near future.

As one recent piece in the Economist explores, the predicted boom in Arctic activity may materialize less quickly than once expected. Low oil prices are likely to dissuade many companies from fossil-fuel exploration in this difficult and unpredictable region. Companies like Total and Statoil have lately been pulling out of Arctic drilling. What's more, the unreliability of Arctic sea ice may deter many container ships from using northern routes, even if they are somewhat shorter.

There's also the vexing question of cost. The Congressional Research Service notes that acquiring a new heavy icebreaker would have a price tag of between $900 million and $1 billion. The Coast Guard's entire 2016 budget request for acquisition is just $1.01 billion. So where would the money come from? It might come out of the Department of Defense's budget. Alternatively, Rep. Young has put forward bills to lease icebreakers from private firms. Some Alaska officials have even pondered whether the state might help chip in. (A cheaper plan might also involve refurbishing the currently disabled Polar Sea, sitting in Seattle.)

That may explain why some people have been now making the national security case for icebreakers. The US Navy, for one, pointed out in its recent "Naval Operations Concept" report that in the case of an armed standoff in the Arctic, the Coast Guard would be in charge of guiding warships through the ice. Meanwhile, Polefka points out that Russia now has 14 Arctic-ready icebreakers and is building three more.

So how big a concern is this? Some experts have long been skeptical that the Arctic is going to be rife with conflict as it opens up. The eight nations that sit inside the Arctic Circle — the US, Canada, Russia, Greenland, Iceland, Finland, Norway, and Sweden — are already working together through the Arctic Council, a forum that has been signing treaties on everything from cleaning up oil spills to search-and-rescue missions.

There are occasionally tensions within these talks — last year, the Economist notes, the US and Canada sent a junior delegation to Russia, which was seen as a snub. But for now, cooperation has prevailed. If that persists, it may be harder to make the national security case for more icebreakers.

* Correction: The currently disabled Polar Sea is a heavy icebreaker, not a medium icebreaker as I'd originally written.