Solitary confinement is terrible for youth. Some senators want to get rid of it.

Share All sharing options for: Solitary confinement is terrible for youth. Some senators want to get rid of it.

Solitary confinement is torture. A United Nations report classified it as such in 2011. One teen inmate told the American Civil Liberties Union in 2012 that he "felt like [he] wanted to die" while in solitary confinement.

Now some senators are pushing to end solitary confinement for youth caught up in the federal system. The MERCY Act — introduced by Sen. Cory Booker (D-NJ) and co-sponsored by Sens. Dick Durbin (D-IL), Rand Paul (R-KY), and Mike Lee (R-UT) — would ban solitary confinement of youth tried in the federal system and held in pretrial facilities and juvenile detention centers, unless it's used temporarily for the juvenile's protection or the safety of others.

Related Mass incarceration in America, explained in 28 maps and charts

"Not only is solitary confinement cruel and demeaning, it's a violation of one's human dignity," Booker said in a statement. "When imposed on adolescents, it can cause serious long-term psychological and physical harm."

Solitary confinement involves putting someone in a cell for hours, days, weeks, or even months with little to no contact with others. It is often used to discipline wrongdoers in prisons, but it's also deployed to protect inmates from others and segregate groups of people who are causing trouble. Around the country, it is used to contain juvenile inmates detained in both youth detention centers and adult prisons.

The US largely abandoned the widespread use of solitary confinement for most of the 20th century, particularly after the US Supreme Court denounced the practice in the late 19th century. But with the rise of mass incarceration in the past three decades, juvenile solitary confinement returned — and some politicians and advocates are now pushing back.

Reform is getting more attention around the US

It's not just some senators working to reform solitary confinement. In the past year, Ohio and New York City enacted some of the most sweeping restrictions on juvenile solitary confinement in the country. But the Senate bill elevates the issue to the federal level.

The MERCY Act, proposed in the Senate, would prohibit solitary confinement for federally adjudicated juveniles unless it's a temporary response to a serious risk of harm to the juvenile or others. The bill would cap the maximum amount of solitary confinement to three hours, and require prison officials try less restrictive methods — such as de-escalation techniques and discussions with mental health professions — first before placing a juvenile in solitary confinement. That wouldn't stop all instances of this kind of detainment for youth, but it would greatly limit its use — particularly as a form of punishment — in the federal system.

The announcement came after Kalief Browder, who killed himself earlier this year, was kept in a New York City jail for three years, even though he was never convicted of the robbery he was wrongly accused of at the age of 16. He claimed he spent more than 400 days in solitary confinement, and he attempted suicide at least six times during his time at the jail. "I didn't get to go to prom, graduation, nothing," Browder told New York City's ABC 7. "I'm never going to get those years back. Never."

In 2014, Ohio also agreed to "dramatically reduce, and eventually eliminate" the use of solitary confinement for disciplinary purposes in youth prisons. The decision came in response to mounting private litigation, and after the US Department of Justice found "constitutional deficiencies" in the state's use of seclusion against youth inmates.

Instead of facing isolation when disobeying rules, inmates at these facilities will likely lose privileges or be moved to specialized housing units with additional therapy services.

A 2010 report from the Department of Justice found that more than one-third of youth prisoners report being held in solitary confinement at one point, with more than half saying the seclusion lasted for over 24 hours.

The widespread use of juvenile solitary confinement shows why New York City and Ohio's reforms — and now the Senate's proposal — are so important. By standing out, the city and state show it's possible to do away with a practice long decried by advocates and the US Supreme Court.

A large body of research shows that solitary confinement can worsen mental illness and even cause it in some circumstances, particularly among younger people whose brains are still developing. Symptoms include hypersensitivity to stimuli, perceptual distortions and hallucinations, anxiety, revenge fantasies, rage, appetite and weight loss, heart palpitations, headaches, problems sleeping, self-mutilation, suicidal thoughts, and, in rare situations, lower levels of brain activity.

Some of the research goes back to the 19th century. The early research about the health effects was so convincing that the US Supreme Court confidently stated in 1890 that solitary confinement is not "a mere unimportant regulation as to the safe-keeping of the prisoner." The court concluded that solitary confinement caused prisoners to go "into a semi-fatuous condition, from which it was next to impossible to arouse them, and others became violently insane; others still, committed suicide; while those who stood the ordeal better were not generally reformed, and in most cases did not recover sufficient mental activity to be of any subsequent service to the community."

The ACLU and other reform advocates say it's time to acknowledge this research and stop the widespread use of solitary confinement. "We have to use data and science in our criminal justice system," Amy Fettig, senior staff counsel for the ACLU's National Prison Project, said, "in the same way we do in many other aspects of public policy."

Fettig describes the rise of solitary confinement as a perfect storm of two factors: mass incarceration creating a need to more easily deal with overcrowding, and the growing belief that the justice system was not for rehabilitation.

"These systems were extremely stressed, but they were also not accountable for the outcomes they produced," Fettig said. "So they did the easiest thing they could think of."

Prior to the rise of mass incarceration in the 1980s, solitary confinement was rarely used in the US criminal justice system for nearly 100 years. It's only in the past three decades that the practice surged back into wider use, as prison populations exploded across the country.

These problems were exacerbated as more mentally ill people were pushed from the health-care system to prisons and jails, forcing prison officials to deal with inmates they weren't equipped or trained to properly handle. In response, many prisons turned to solitary confinement to try to control the influx of mentally ill prisoners. 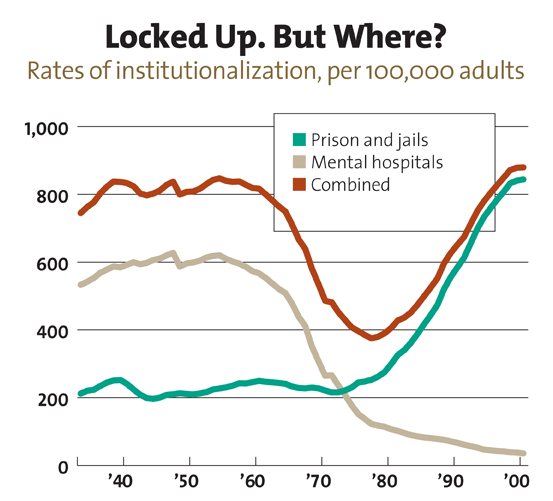 Supporters argue they need solitary confinement to manage unruly inmates, including younger prisoners. "Eighteen- to 21-year-olds are a very violent group," Sidney Schwartzbaum, a prison union official, told the New York Times. "If we can't secure them, violence is going to go on unabated. What do we do with a guy who slashes someone's throat?"

But critics say there are better ways to deal with inmates. There could be a greater emphasis, for example, on rehabilitating prisoners and addressing the underlying socioeconomic problems that lead to crime in the first place — instead of throwing more and more people in prison.

"The criminal justice system has become the dumping ground for all our social ills that we don't want to deal with in other ways," Fettig said. "Part of unwinding mass incarceration is finding better solutions in the community."