How Big Vaping is misinforming the public about e-cigarettes

Share All sharing options for: How Big Vaping is misinforming the public about e-cigarettes

California is the newest case study in the e-cigarette information wars. On Sunday, California's public health department went live with an awareness campaign about e-cigarettes on a new website, Still Blowing Smoke. By the time of their official launch on Monday, vaping advocates were already on the offensive with a nearly identical site: Not Blowing Smoke. 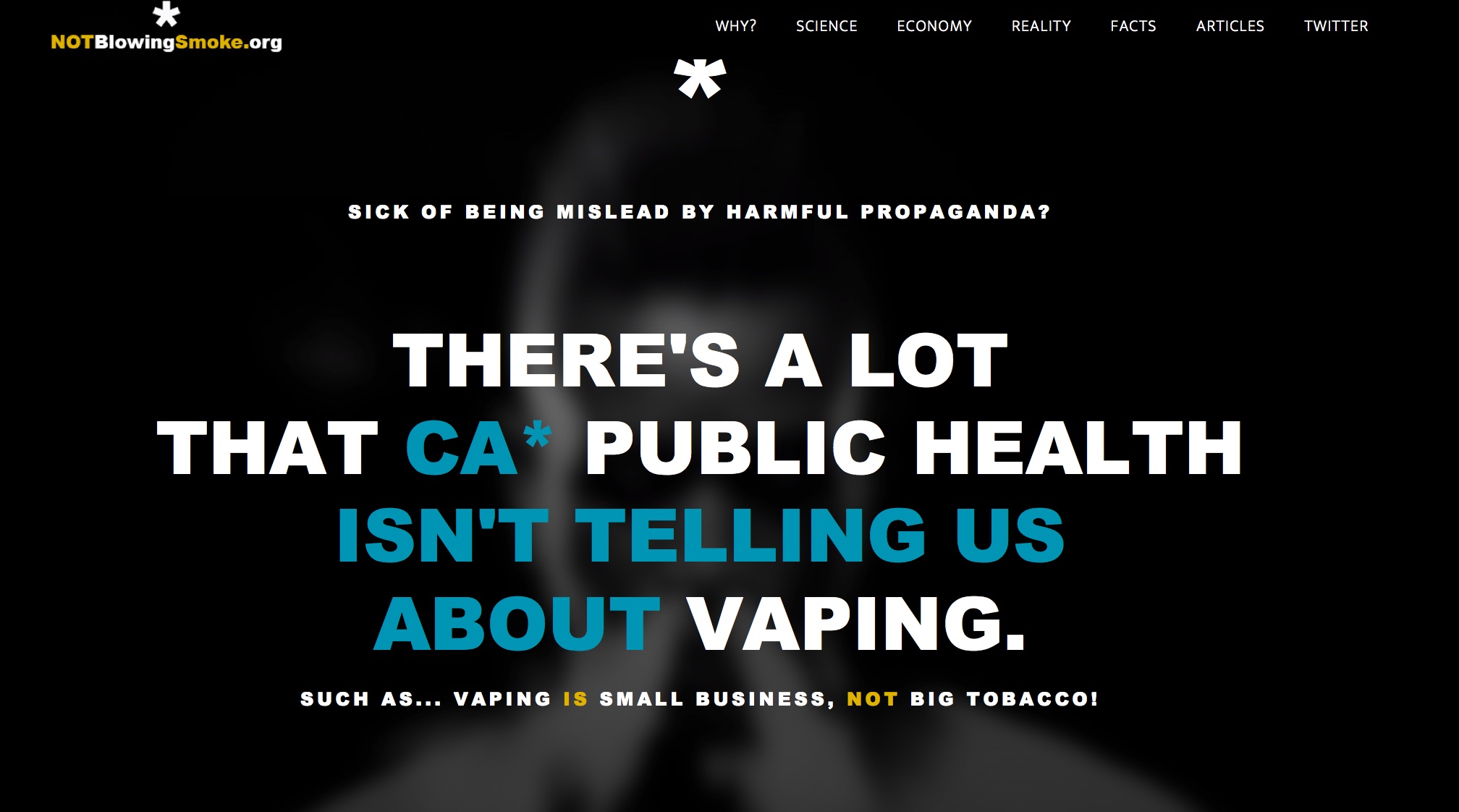 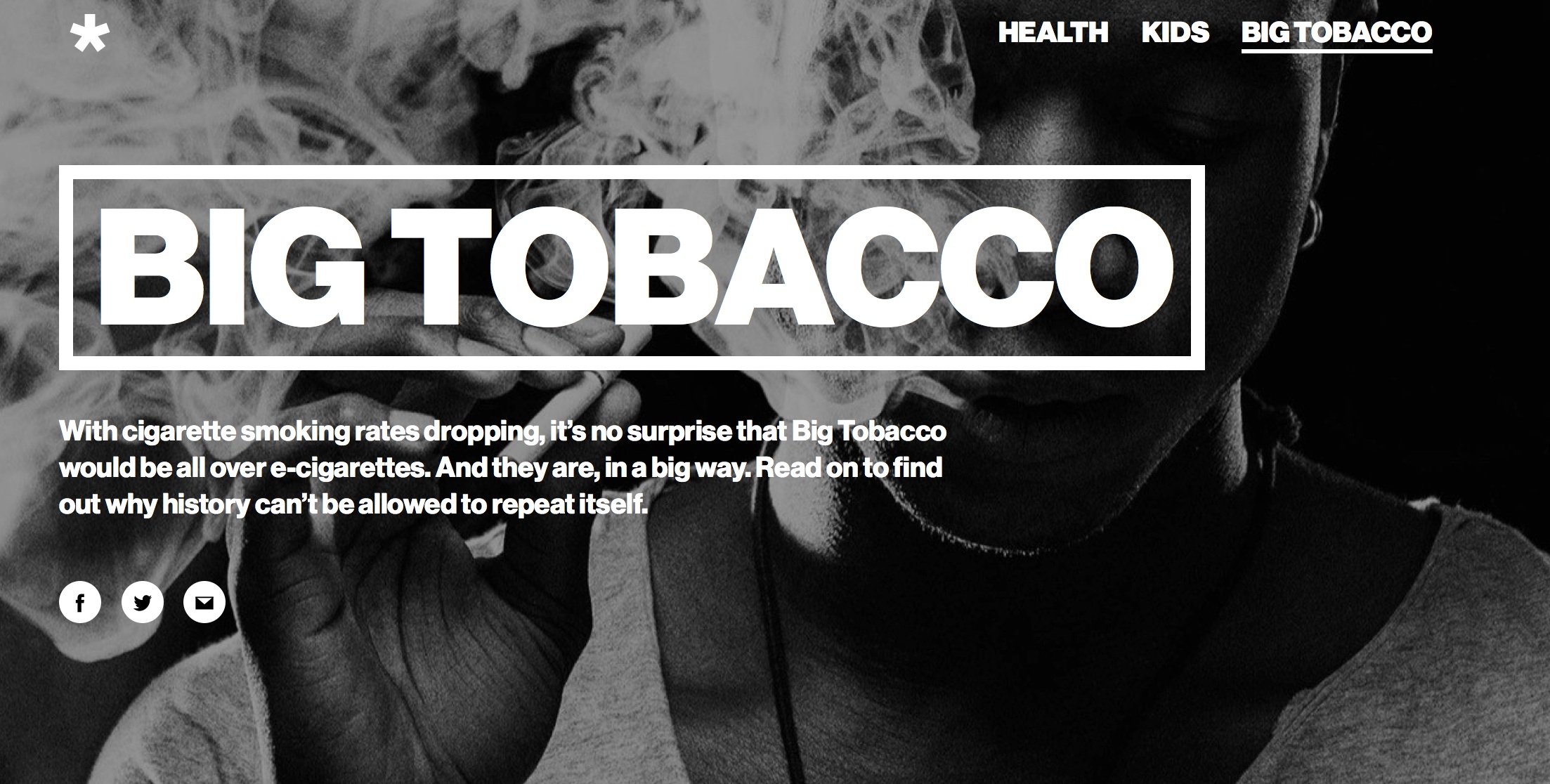 The websites are easy to confuse. Backed by vaping advocates, Not Blowing Smoke borrows font, design elements, and imagery from the state's website — except where California’s is filled with public-health warnings about e-cigarettes, the copycat site downplays the health concerns and says the science proving these devices are healthy is unequivocal.

there's a lot we don't know about the health impact of e-cigs but the vapers are more certain While the state campaign reminds its citizens that all the Big Tobacco companies also own many e-cigarette companies, the vaping site pushes the narrative that "vaping is small business, not Big Tobacco."

While California suggests there's still a lot we don't know about the health impact of e-cigarettes, the vapers are a lot more certain: "Long-term e-Cigarette use can decrease cigarette consumption in smokers not willing to quit," their site reads. "E-cigarettes are less addictive than tobacco cigarettes."

For public health workers, the quick counterattack is reminiscent of early fights over cigarettes. Cigarette companies, for decades, knew their products were harmful. But they denied those hazards, hiring prominent researchers and lobbyists to wage public-awareness campaigns unpicking and calling into question the mounting evidence about links between smoking and cancer, heart disease, and early death. Big Tobacco managed to divert the conversation about health and turn it into one about politics and governance.

E-cigarettes are much newer, their health impact is still unclear, and the research may eventually show that pro-vapers are correct and they are a helpful harm-reduction tool. But even if the science follows a different trajectory, the situation in California and elsewhere suggests the Big Tobacco marketing playbook is being rolled out once again.

The vaping camp also launched a Twitter account that uses the state campaign's name — Still Blowing Smoke — but with this tagline: "There's a lot public health isn't telling us about vaping."

While the e-cigarette market is growing fast in the US and around the world, particularly among adolescents, just about every national and international health group agrees the jury is still out on the health impact of these devices.

The World Health Organization has called e-cigarettes safety "illusive," since the ingredients they contain are not always disclosed and there is not "adequate data on emissions." The Centers for Disease Control takes a similar stance: that there is not enough evidence to understand the health impact of vaping. They warn of the potential for nicotine addiction and poisoning, and believe the devices should be more tightly regulated. Like many other research groups, both the CDC and WHO are concerned about the still-unknown long-term biological effects. What's more, when it comes to helping people quit smoking, the science is mixed at best.

Because of this uncertainty, the public health community is advising people  proceed with caution.

But when researchers, anti-tobacco advocates, or public heath officials voice their concerns, they say they are met with a combination of doubt, vitriol, and trolling.

"The California health department’s Twitter and Facebook pages are clogged with [messages from vaping advocates]," said Stanton Glantz, a University of California, San Francisco–based professor and longtime tobacco-control advocate who has been watching the campaign and counterattacks unfold this week. "It’s making it hard for them to communicate with anybody."

When you look at the California health department’s Facebook post about the e-cigarette campaign, you see it’s been carpet-bombed with hundreds of comments, some of them abusive and threatening, others suggesting public health officials are in the pocket of Big Tobacco, even though many vaping companies are actually owned by the tobacco industry. It's not yet clear whether the Facebook and Twitter attacks are organized and related to the Not Blowing Smoke website, though they follow a pattern others around the world have been observing.

Researchers say they are being abused by vaping advocates

In Australia, researchers who are critical of e-cigarettes have reported online trolling and abuse. Writing about the attacks in The Lancet, a group of researchers noted, "Anyone with the temerity to suggest that e-cigarettes are anything other than the game changing solution to the problem of tobacco will be subject to grossly offensive attacks, with growing evidence that these are being orchestrated." The researchers said they received a tweet that contained a picture of a noose, captioned, "Your days are numbered."

Martin McKee, one of the Lancet authors and a professor of public health at the London School of Hygiene and Tropical Medicine, said that whenever he or his research students write anything that's critical of e-cigarettes, they become the subject of "very abusive" attacks.


Tweets directed at researchers who have been critical of e-cigarettes. (Courtesy of Martin McKee)

"In the early days, I can certainly say the experience was very stressful," he said. "The impact is much greater on junior researchers. In some cases, the abusers go for them by making formal complaints about them, alleging breaches of ethics procedures."

He added: "Anyone who suggests e-cigarettes are anything short of miraculous seems to be targeted."

Peter Hamm, communications director at the Campaign for Tobacco-Free Kids, said the opposition to their awareness campaigns from vaping advocates often follows a similar script: "They say it's obvious these devices are safe, and that we're putting lives at risk by raising questions about them. They say we're in the pocket of Big Tobacco. Regardless of the point we make, they respond instantly with complete denial."

"When I put a blog post up related to e-cigs, if it takes them more than a few minutes to come back at me, it’s like a long time," said Glantz. "The reactions are hyper-aggressive. They are very fast."

Other cities and states have reported fierce blowback

Chicago is another case study in the e-cigarette information wars. The city’s department of public health launched an e-cigarette messaging campaign a week prior to a city council vote on clean air regulation last year. The new law would have limited where people can vape.

As soon as they began tweeting their public health messages, the account became a "Twitter bomb target," getting inundated with more than 600 tweets against the proposed regulation, according to a systematic analysis of the blowback in the Journal of Medical Internet Research.

Of the 683 tweets that mentioned the health department that week, 609 were anti-policy, they found. More than half of those suggested e-cigarettes help smokers quit and are healthier than cigarettes; over one-third "asserted that the health department was lying or disseminating propaganda." All told, the number of anti-policy tweets was more than 10 times higher than the number of pro-policy tweets. Curiously, they found that only a few of the Twitter users were from the Chicago area: "Twitter users from Chicago were significantly more likely than expected to tweet in support of the policy."

A timeline of tweets during the Chicago's e-cigarette regulation discussions. (Journal of Medical Internet Research)

In Michigan, the chief medical officer, Dr. Matthew Davis, came under intense scrutiny when he testified about changing the way e-cigarettes were regulated in his state. The industry was promoting the idea that e-cigarettes are not tobacco products and should not be regulated as such.

"What people forget is that a lot of e-cigarette companies are connected to Big Tobacco," Davis said. "What that means for the public health community is that proponents of e-cigs have very strong backing and very effective message generation honed over many years in the tobacco industry. This is a familiar adversary of public health, but the topic is slightly different."

E-cigarettes, he added, are not the same thing as conventional cigarettes. But even if the health science takes a different turn, for now, the information war appears to be following a similar path.

Correction: A previous version of this article incorrectly stated that the Not Blowing Smoke campaign is backed by three advocacy groups. While the groups were initially featured prominently on the site, the site founders say they were acting independently and since removed the affiliations.