Jupiter's Circle is the Mad Men of superhero comic books

Share All sharing options for: Jupiter's Circle is the Mad Men of superhero comic books

Mark Millar swears his office looks like the home of a serial killer.

"For about eight weeks, I literally worked out an entire lifespan of all the characters," he told Vox. "I had notes and posters all over the wall and a lot of doodles and drawings."

Legacy, which was first published in 2013 and closed the chapter on its first arc in January, is the product of Millar's grand design. With art from the legendary Frank Quitely, the book swirls with brooding magnificence, tracing a turbulent story of different superhero generations and the nightmare of what happens when kids betray their parents' wishes.

But that's just the front end of Millar's work. The back end — the logic, blood, and guts of his characters — was something only Millar (and ostensibly anyone who visited his home office) knew about. Until now.

Jupiter's Circle, due out on April 8, is the full realization of Millar's sophisticated scheme. It's the glitzy, golden backstory to Legacy's contemporary gloom and doom — a look at superheroes at their peak.

Circle is set in a world in which the elemental darkness that created Watchmen and The Dark Knight Returns doesn't exist. It vibrates with the glamour of Old Hollywood. But as Millar makes very clear, that doesn't necessarily mean it was a better time.

As sharp as it is provocative, Circle is a marvel of a comic book. And with a triumphant return to Legacy, whose second arc is slated to begin in December, Millar has a dynasty on his hands.

Circle has the beauty and damage of Mad Men

Circle, according to Millar, has two main influences: the Super Friends cartoon from 1973, and AMC's Mad Men. Though these are two distinctly different shows, both have a way of idealizing the '50s and '60s.

Circle's connection to Super Friends is more organic — the heroes were cut from that wholesome garb that swathed many of the comics created during what's known as the Silver Age of comic books. These stories were incredibly earnest, and the evil their characters faced was less menacing than what exists today.

Man Men takes the opposite approach. It builds up the glamour of the '60s as something to puncture. The more glamorous the person, the uglier and more jagged his or her personal life is.

Millar uses the elements of both of these shows to tell a story about our tendency to gloss over the truths of those who came before us and put them on untouchable pedestals. In Circle, Millar wants to show that we've done this to superheroes, too.

"Our generation often talks about the generation before ours as the greatest generation," he said. "We end up idealizing them. But they were just as stupid as us. I love the idea of our parents being the young ones."

Millar is fascinated in the moments between the big action scenes. He wanted to explore what happens to superheroes after the climactic fight, the exciting rescue, or the crushing defeat, just like Mad Men explores what happens when its characters head home from a day at the office.

Similarly, the superheroes in Circle act less than super:

Millar's writing is full of winks and nods to the Silver Age, but it's also provocative without being seedy or showy, clever without being pretentious. The book is as bright and coy as Legacy is epic and moody.

What makes it all work is Millar's continued adherence to his worldview: the golden age of superheroes and America wasn't golden; we just don't want to remember the parts that tarnish that image. Superheroes and celebrities are as super as we allowed them to be.

Circle's art is a beautiful trap

Circle's departure from Legacy isn't just with the story — it also comes from Wilfredo Torres's art. The book's pop-art feel features lines so crisp they look as if they were chiseled into the paper. The heroes, with their jaws so square, look like they stepped out of Roy Lichtenstein's brain.

"There's something about Wilfredo's art anyone can understand," Millar said. "It's really hard to make good art simple. And it juxtaposes the Saturday-morning-cartoon vibe with very adult themes."

Torres's art is welcoming. It starts off safely, using the same devices you see in vintage comic books  — the team fights a giant, memory-sucking octopus in the first issue. It lulls you into letting your guard down, and once you do, it smacks you with an image like two gay men in sexual afterglow:

Seeing '60s-style art depict something a '50s or '60s comic would never print is a jolt to the system. Even things like sex or alcohol in this style are something we've rarely seen explored. It invites the subversion of the era and encourages you to use your imagination to think of these things happening in between the panels of old-school comic books.

This concept of folding something adult or more human into the pages of older titles is something continually seen throughout the book. It's also the inverse of what we saw with Legacy, where a howling darkness and gloom fill the book, save for a few moments of hope (Legacy's art is on the left, Circle's is on the right): 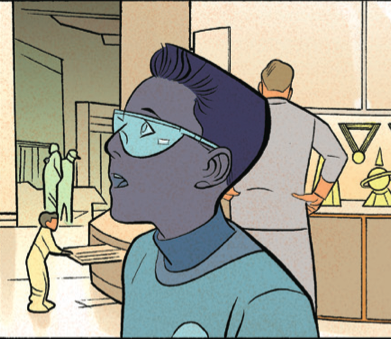 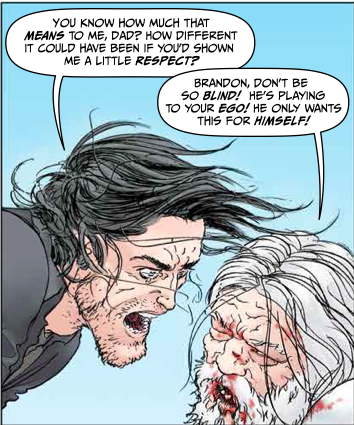 There's a difference between being super and changing the world

Circle's first issue considers the idea of a gay superhero at a time when the world wasn't particularly friendly toward gay people. It runs counter to a recent trend in comics in which gay people are often rushed into relationships and marriages.

"I do find it fascinating that really within the last 10 years and relatively recent times, there's been a gay character included in most mainstream comedies and shows, which is great," Millar said. "But on the other hand, I think they're slightly neutered. It's weird that there's this version of gay characters seen, especially in American shows, as people who are almost desexualized."

Millar and Torres didn't want to include another neutered character, which is why they don't shy away from showing the physicality of gay sex scenes and the police raids that peppered the era. This makes a meta point about the lack of gay sex scenes, but also about the abundance of gay characters in pop culture.

Circle is, of course, making a bigger point: this world isn't perfect. You can be super in this world and still be powerless. This will affect the series' female and nonwhite heroes.

"Superheroes have always been a country club of sorts," Millar said. "Up until very recently, everyone was white. And it's so unreflective of the modern world."

Millar continued, explaining to me that he had read Olympic gold medal winner Jesse Owens's autobiography. In it, Owens described how FDR, whom American history regards as a "good" guy, snubbed the American hero. Owens achieved gold-medal glory during a time when America was grappling with segregation, and was never invited to the White House. This spurred Millar to explore the idea of a black superhero in the '60s who had to fight prejudices against him. That character, Millar said, will appear in later issues.

"I thought the idea of an African-American guy in the late 1950s with superpowers is going to have a different vibe," he said. "African Americans were treated so disgracefully and regarded with distrust. So the idea of a hero who is as powerful as Superman but doesn't have a white face — he might not be as popular with the general public."

Millar isn't shying away from heavy, frustrating, or even embarrassing stuff. The giant monster in Circle is the easy part. There's no superpowered cure for racism, sexism, and homophobia.