Marijuana arrests fell sharply after Colorado voters legalized pot in 2012, but black residents are still being penalized for the drug at disproportionate rates.

That's the takeaway from a new report by the pro-legalization Drug Policy Alliance, which studied drug charges in Colorado during the two years before and two years after marijuana was legalized in 2012.

The report found that marijuana-related charges dropped by more than 90 percent between 2010 and 2014, but the penalties that remained — for illegal distribution, public use, and possession in excess of one ounce — were disproportionately enforced against black Coloradans. The marijuana arrest rate for black people in 2010 and 2014 was 2.4 times the rate for white residents, according to the report. That's despite nationwide surveys that show black Americans don't use or sell illegal drugs, including marijuana, at significantly higher rates than white Americans.

Tony Newman, spokesperson for DPA, praised the drop in overall arrests but acknowledged the remaining discrepancies. "Despite the unsurprising racial disparities, these massive drops in arrests have been enormously beneficial to people of color," he told the Associated Press.

DPA's findings match a similar report released in September by the Center on Juvenile and Criminal Justice. That report found that pot-related arrests fell following the legalization and decriminalization of marijuana in five states, including Colorado, but racial disparities in existing arrests remained roughly the same. 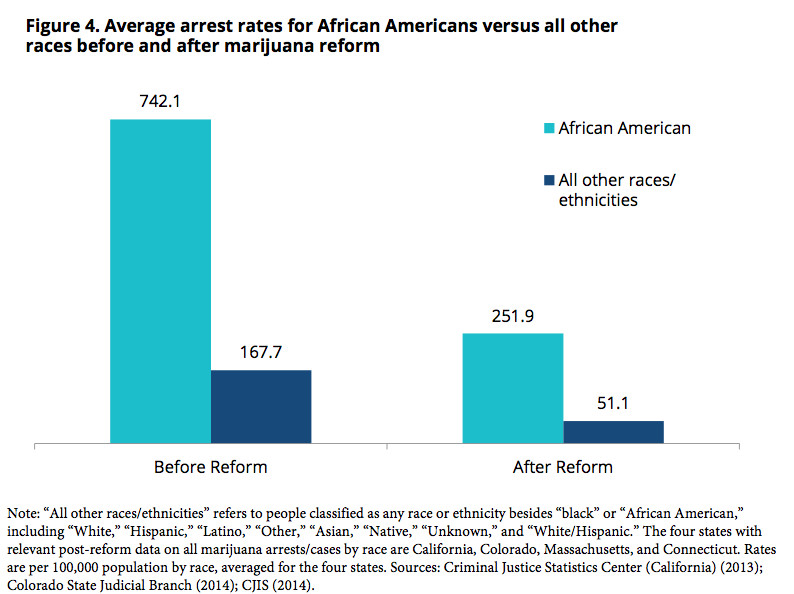 (Center on Juvenile and Criminal Justice)

The reports show the dual nature of racial disparities in the war on drugs: relaxed drug policies can remove methods by which law enforcement potentially discriminates against minorities — but really fixing all racially skewed outcomes will require addressing underlying personal biases, some of which are likely subconscious, as well as the socioeconomic causes of some of the disparities.