Surveys of 374,000 adults give us the clearest picture yet of where LGBT Americans live

Share All sharing options for: Surveys of 374,000 adults give us the clearest picture yet of where LGBT Americans live

Demographic researchers have long been working to map the geographic spread of America's LGBT population. But analyses have been difficult to conduct since the US Census, the most comprehensive source of demographic data in the country, doesn't ask people questions about their sexual orientation or whether they're transgender.

A new analysis by Gallup, based on surveys of more than 374,000 adults across the country, gives the clearest insight yet for the 50 largest metropolitan areas. It shows that more LGBT people live in the West, even in conservative cities like Salt Lake City, but are less likely to reside in the South and Midwest, based on the metro areas in the top 10 compared to the bottom 10. 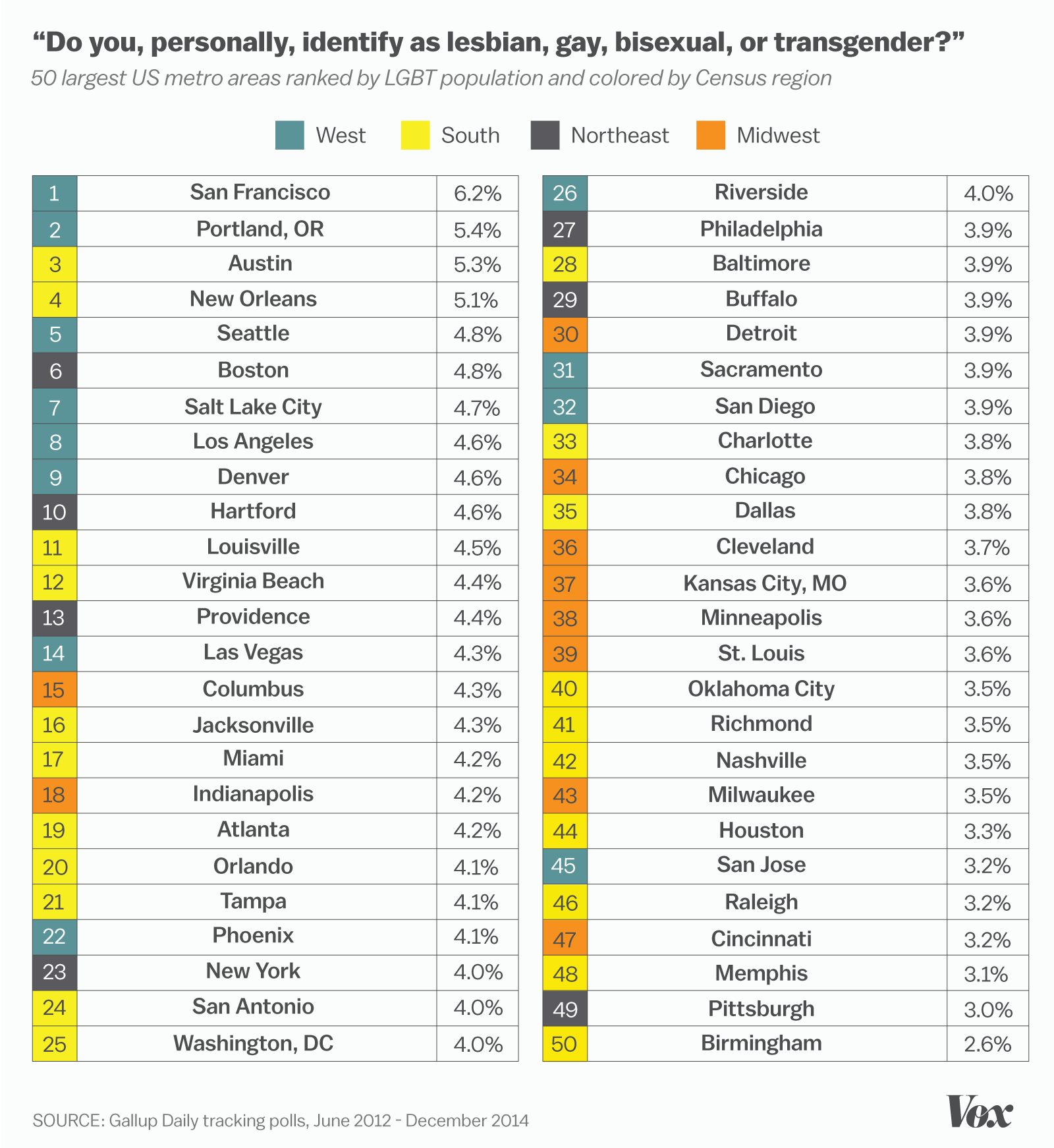 As the New York Times' David Leonhart and Claire Miller noted, the larger LGBT populations in some metropolitan areas may show that people tend to relocate to one area in a region where they're more likely to be accepted. Rural places in Utah and Oregon, for example, are generally less accepting of LGBT people, which may convince gay, lesbian, bisexual, and trans people to leave their homes and head to cities such as Salt Lake City or Portland, Oregon, where they'll likely find more inviting communities, since cities tend to be more progressive.

But the survey also may reflect cultural attitudes that make it easier for someone to say they're LGBT in a survey. Oftentimes, it's a lot easier for someone in San Francisco, one of the most LGBT-friendly cities in the country, to come out as gay than for a person in Birmingham, Alabama, a city known for its social conservatism, to do so.

The report also found very little variation from metro to metro. The difference between San Francisco, which is first in the ranking, and Birmingham, which is last, is only 3.6 percentage points. So while some LGBT people may flock to more accepting places in the West, there are still sizable populations living in places for other reasons, such as jobs, family, or hometown attachment.